I can’t remember a summer that I wasn't in a hurry for it to end. As an only child in rural Oklahoma, summer just meant three long months of having to stay at some babysitter’s house parked in front of the TV or forced outside in the 100 degree heat with other children of varying ages to entertain ourselves. At least the return of school meant seeing my friends on a daily basis and having something to do, and once I turned 16, it meant not having to have a job. As a college runner, summer was our off-season, which ideally it was the time to rebuild with lots of base miles for cross country season in the fall, but for me, slogging through all those miles in the heat usually just resulted in my body being too destroyed to actually compete when fall came.

Then I became a mountain bike and cyclocross racer. Summer always sounds good in the middle of winter. Rather than slogging away my base miles in the heat of summer, as a cyclist, I put on my lobster gloves and trudge through cold and slush, dreaming of the mountain bike races that I have planned for the spring and summer. That magical first day sometime in March when the trails are dry enough to ride comes and goes, the spring races pass, I race the first couple ofcross country races of the year, and I am over my mountain bike by the time the trails become dusty in July. Before I’d even experienced my first ‘cross race, I couldn’t wait for mountain bike season to be over so that I could. It’s pretty much been that way for every summer since.

So as someone who has internalized “Winter is coming.” as well as any member of House Stark, it is odd to find myself wishing that this summer wouldn’t end. I just have too much unfinished business on the mountain bike. Rather than giving up when things didn’t go my way this summer, I’ve kept trying and made what progress I could. There are still a million rocks out there ready to be conquered and I’m not ready to be taken away from them.

Late August seems to have snuck up on me, anyway, since yesterday I found myself riding laps around the rough ground of a farm while I relearned what ‘cross felt like. The occasion was no less than THE International Intergalactic Global Open Cyclocross Team Relay Championship of the Multi-Friggin-Verse, in which I competed along with Frank and two of his Penn State teammates as “Dr. Teeth and the Electric Mayhem”. SPOILER: We got eighth, so we were pretty happy with our intergalactic ranking.

Each of us rotated laps for four hours, ending with five each for Sean, Sasha, and myself. We were joking while Frank was out on a lap without about 45 minutes before the cutoff that we would make it through the rotation exactly one minute before the cutoff and force Frank to go out for number six. Sean said that Frank would be mad, but “good mad”. We didn’t really think it would happen, but it he did end up having to go out for a final lap less than a minute before the cutoff. He wasn’t exactly pleased about that, but we wouldn’t be the eighth best cyclocross relay team in the multi-friggin-verse without his effort. 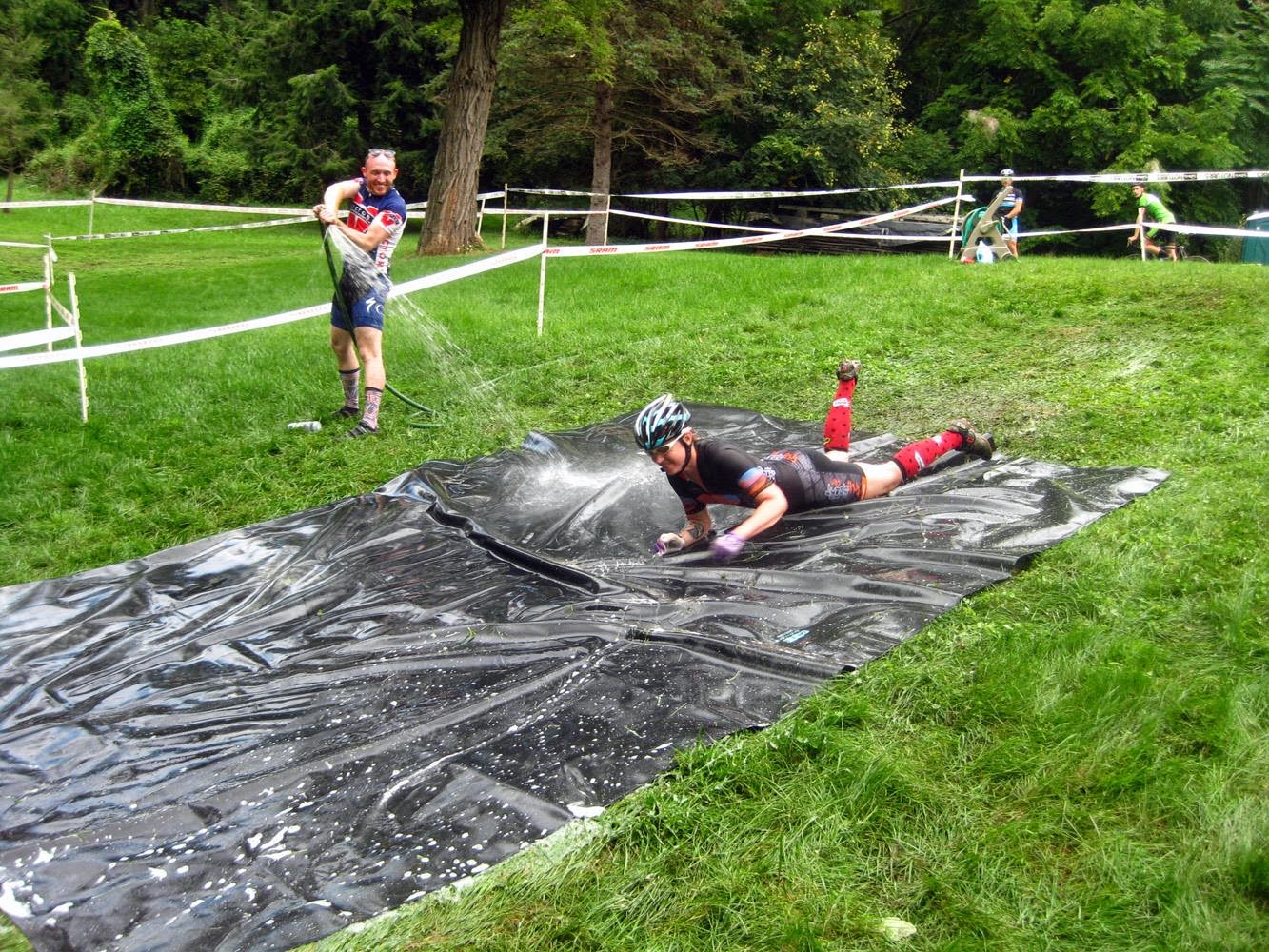 My favorite part of the day was the slip-n-slide shortcut. There was a steep run-up section with double barriers, which I was of course dreading after my practice lap. I was also a little confused by the kiddie pools and slip-n-slide in what appeared to be the pit area. Luckily, at the start they announced the option to rack your bike at the bottom of the hill, run up of the hill bike-and-barriers-free, slip-n-slide to the bottom, then continue on at the bottom of the twisty descent after the run-up. So basically, wins all around. A few “serious” people tried to stick to the “real” course, but there were plenty of hecklers available with squirt guns and hoses to make sure they still didn’t stay dry for their efforts.

Since I’ve been busy pretending that ‘cross isn’t coming, this race was a good transition for me. I was the second leg on our team, so the field was already spread out enough by the time I started riding that there wasn’t really anyone for me to race against. For the most part I was just time-trialing, except for my second lap where there was a girl who started just far enough ahead of me that I was able to slowly reel her in throughout the lap. That was nice, but it was it was also good just to have a chance to get used to going hard on the ‘cross bike without having to subject myself to that screaming pain that comes from that first time out on a real course against competition each season. 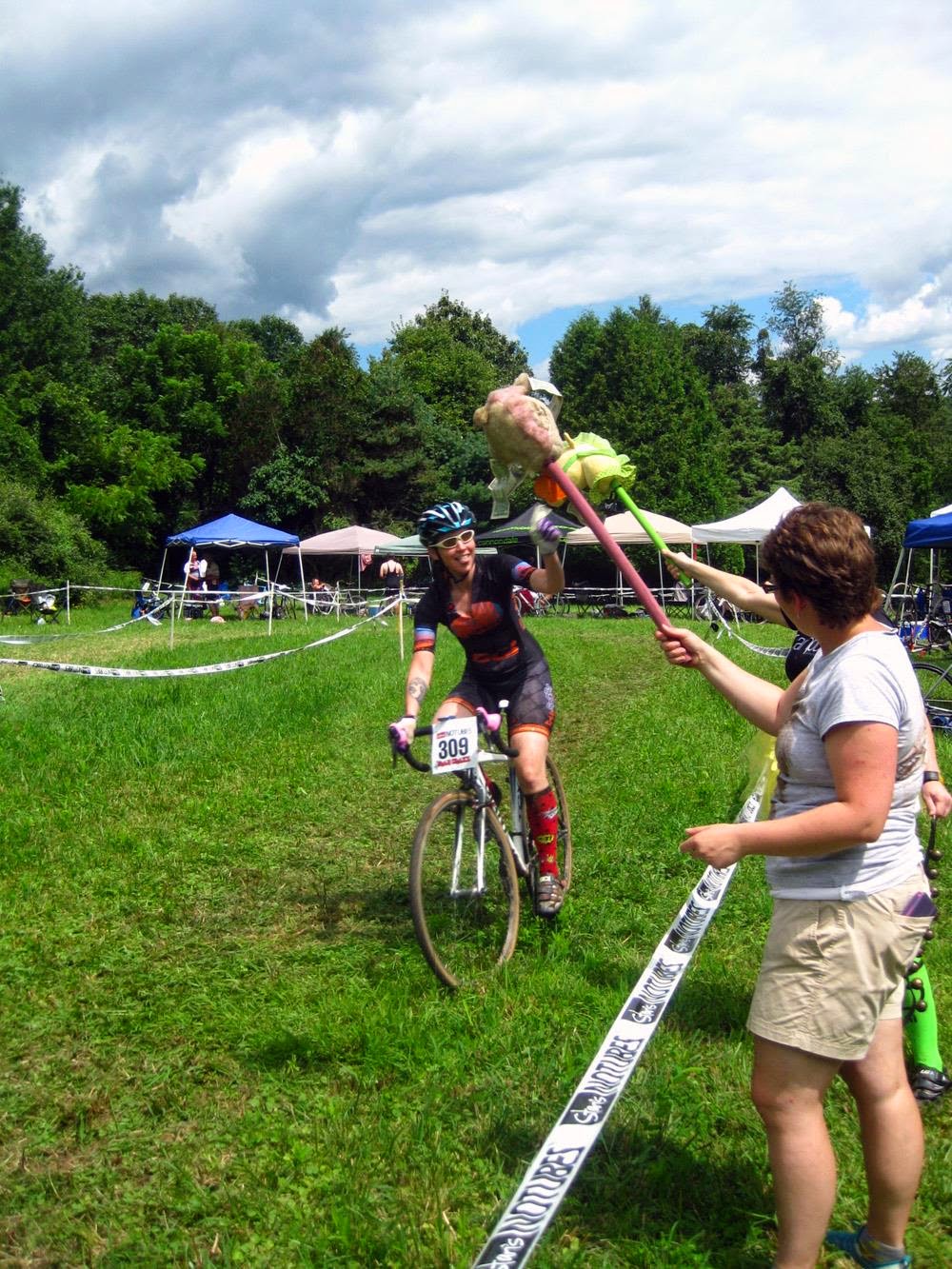 I’m still wishing that I had a couple more months to focus just on mountain biking before winter comes, and I’m still sad that ‘cross season no longer means OVCX, but the season is upon us, and I guess that I’ve got to make hay while the sun shines. Or more accurately ride over cut hayfields while it rains. As much as I’m against the “all people with vaginas and no UCI licenses are the same” category system on the East Coast, it will hopefully do my little sandbagging soul some good to be ranked smack in the middle of a 50-ish deep women’s 3/4 field. If my Tuesday night mountain climbing has taught me anything, it is that I can still make myself ride really freakin’ hard when I have an achievable marker to chase, and that’s something that I’ve been missing for a couple of years now. So I guess it’s time to say goodbye to summer, but hope to keep the heat of it in my belly through the fall.
Posted by Lindsay Hall-Stec at 3:17 PM