Was I Really in the Hospital Seven Weeks Ago?

Earlier today I was in the shower in the ladies' locker room of the French Lick Resort golf clubhouse, struggling with the awkward hand-held shower attachment. There's a shower head, but the water always seems to be switched to the hand-held thing and I have to figure out how to switch it to the shower head. Regardless, while I was doing this I was thinking about how pointless hand-held attachments are when I looked down and noticed the fold down bench, and had a memory of another awkward hand-held shower. Seven weeks ago this afternoon, I was sitting in a rickety plastic chair in shower trying to wash myself for the first time in nearly a week with a hand-held shower attachment. I was really pumped on the shower and the fact that the doctor had finally removed the disgusting piece of plastic tubing that was still protruding from my left side earlier that day.
Considering the events that today's awkward hand-held shower concluded, it's hard to believe that just seven weeks ago today, I was still in the hospital. 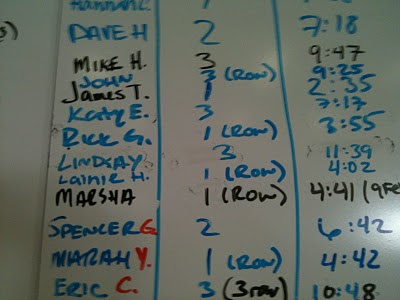 My name up on the big board
I started the day off with a trip to Crossfit Southern Indiana. I had my first session there on Tuesday, and was still sore when I got up this morning after a crash-course in lots o' squats. This particular facility requires newbies to do three sessions one-on-one with a trainer so that they learn good technique before they are thrown in with a big group. I'd already scheduled today's session before I saw that the weather was going to allow for rare February mountain bike ride. 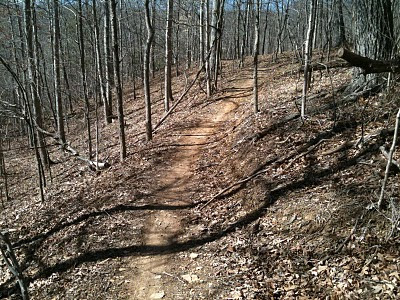 I wouldn't normally double up like this, especially since I'm still in the gray area about whether I'm really even supposed to be "training" yet, anyway. The fact of the matter is that I wasn't really told an exact timeline for my return to physical activity, but I've definitely been wanting to do stuff again the last couple of weeks. I just tell myself I'll stop when it hurts. It took a lot to hurt me today, which is a good thing. 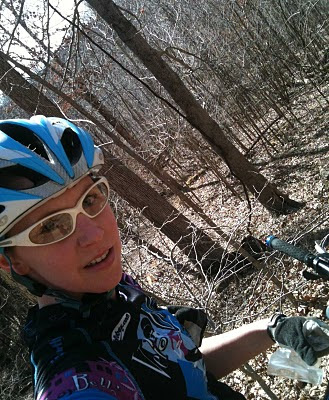 I wanted to do one long lap and one short lap at French Lick, but I ended up only doing one big one. In some ways I feel like I'm in way better shape post-surgery than I ever expected to be, but riding today was hard nonetheless. The climb up from the creek was kind of torturous, even with the granny ring, but it's always hard. I'm guessing it would be extra hard anytime after doing a Crossfit session in the morning, even if I was in good shape, so I don't feel bad. 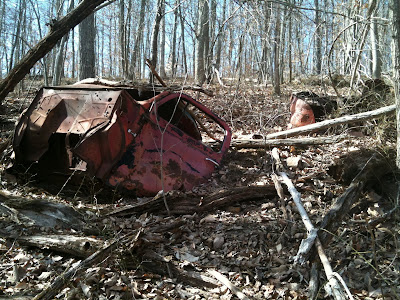 Seeing trails in middle of winter with no greenery at all is weird. How many times have I ridden past this old car and never seen it before?
I knocked off after one lap, because I really couldn't imagine another one of the sustained climbs that even another short lap would require. Plus, I was getting achy in the torso region while descending Buffalo Trace, so I decided it was it time to thank my body for the resilience that it offered me today and reward it with some rest before my luck ran out. It was supposed to rain tomorrow, but now it's looking like it will be nice again, so going out for another ride will be tempting. I guess I will just have to see how I feel in the morning.
Posted by Lindsay Hall-Stec at 5:10 PM No comments: 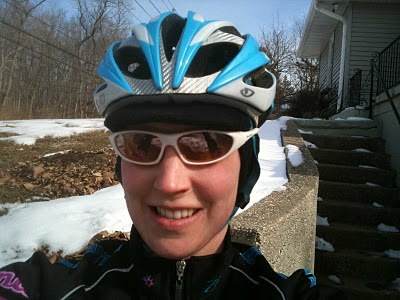 About a week ago, I noticed that the pain in my abs was much improved, and that I could move pretty freely without feeling like I was going to tear something. Then the weather forecast called for weekend temperatures in the 40's and lots of sun. So it was time.
Today I rode my bike for the first time in nearly 11 weeks. Nothing too exciting, other than the fact that it happened. I went out for an hour and kept it pretty easy. Only a few minor aches in the abs here and there, but no big deal. The rest of my body felt weird being stretched into the unnatural position of riding a bike again, and it took me a few minutes to remind my legs how to turn in circles. It was good to be back, though.
I'm hoping to have my first Crossfit session on Tuesday, and guess at point my 2011 comeback will officially be rolling.
Posted by Lindsay Hall-Stec at 5:26 PM No comments: