For Lack of Something Better to Say

It's funny how my blog-ability has dropped since I swore off declarations of Big Plans. I'm still conjuring up Big Plans in my head, but at least I'm keeping them to myself. I'm trying to break myself of the habit by breathing deeply and telling myself to focus on the task at hand. Plans are a good thing; Big Plans are a messy way to give myself a false sense of contol. Must learn patience...

I read this article this morning. I think it holds some good advice regarding Big Plans.

I also just came across this article, as well. I think it might possibly be the most awesome promotion ever hatched by a bike company. However, couldn't they ditch the cheerleaders (lame-o) and spend extra money on a "Sparkly Pink Bike Series" for the ladies?

I'm not sure how having cheerleaders is sexist but assuming all women want sparkly pink bikes is not. However, I'm sure if you gave any up-and-coming racer a free bike, pro race support, and paid his/her travel expenses, it would not matter what color the bike was.
Posted by Lindsay Hall-Stec at 2:36 PM No comments:

After my big announcement on Tuesday, I've had surprisingly little to say. The fact of the matter is that my daily routine will stay pretty much the same until February 2nd, but my perspective about it has changed a lot already.

A couple of days ago, I saw a reference to "No Drama Obama" and it made me think. It wasn't the first time I'd seen or heard this nickname, but it really resonated with me on that occasion. I realized that my new job is a great opportunity to become No Drama Rodkey. Sure it doesn't rhyme, but what really rhymes with Rodkey?

There are several reasons for this. The most obvious is that I can stop applying for jobs for the first time in four years. Yes, I've pretty much been looking the whole time, because no matter what happened, I always felt like I was behind where I "should" be. I finally feel like I am exactly where I "should" be in regard to 90% of my life.

I guess that means that cycling is less important to me than I thought (<10%), because I'm sort of okay with the fact that it is the only area of my life that is not in place now. However, I figure that with everything else in place, it will fall into place, too.

It's funny because all the times that something didn't go the the way I wanted and someone said, "It will all work out for the best", I thought it was so trite and patronizing. However, as I've reflected on the past couple of years, I've come to the conclusion that *gasp*, things have worked out for the best. The new job that I ended up with is way better than all the other jobs for which I was turned down in the last two years. Also, I'm really happy that we bought our house two years ago when we could barely afford it, because now that we have more money, we get to spend on fun stuff instead of a big mortgage. It was hard finding something decent in our price range then, but it's a perfectly good house and I'm glad we didn't spend more.

I still don't plan on telling any distressed people that "it will all work out for the best" anytime soon.

The other part of the "no drama" equation is something that I've been thinking about for a while but I haven't been able to carry out the way I wanted. Adam and I were discussing when people have "epiphanies", which was his term for when people get big ideas about training, racing, vegetarianism, etc., but don't carry them out. I agreed with him that it was annoying, although I'll admit I'm one of the world's worst offenders in this category. When I started this blog, I wanted it to consist of rousing reports of my racing adventures and my training experience of what works and what doesn't. Unfortunately, it's mostly turned into Lindsay's Big Plans and the Excuses Why They Didn't Work Out. So I'm going to try to cut down on my "epiphanies" or at least try to keep them to myself more, although the blather above sort of falls into that category.

The only problem is that I'm not sure what I'll write in mid-winter about with no races to report and no more Big Plans, but I'm sure I'll figure something out. Maybe I can start taking more pictures once lobster glove season is over.
Posted by Lindsay Hall-Stec at 8:03 PM No comments:

I just got a new job, a really, really good one.
Posted by Lindsay Hall-Stec at 4:33 PM 5 comments:

I haven't had a lot to say this week, because last Monday I tried to get back into my plyo routine. This was the first time since I tried it in the snow back in December. I was able to put out a much better effort when I didn't have to worry about slipping on the ice. I also added some Olympic lift action afterward.

It's kind of funny, because I did 3 sets of 3 clean-n-jerk. The first two sets I just used a broom handle to get my form back since I hadn't done it several months. On the last set, I only used a ~20 pound weighted bar like might be used in an aerobics class. Nevertheless, somewhere between the plyos and the lifts, I completely trashed my body. I was so sore I couldn't walk down stairs normally until yesterday, and my abs and triceps were still somewhat sore when I woke up this morning. Crunches are a joke; explosive jumping around appears to be a much better ab workout.

My experiment for the coming week (considering I don't do myself in on Monday again), is to see how I like listening to an audiobook while riding rollers. A couple of months ago, a friend/mentor from work found out that I was Harry Potter illiterate and lent me the first book of the series in CD form, so that I could listen to it on my drive to Oklahoma. When I got back I realized that I'm really over my two-year-old indoor training soundtrack and thought I'd try listening to the second book over the next few workouts. I even had the sweet blog title: "Harry Potter and the Prisoner of the Bike Dungeon" picked out to post after last Tuesday's ride. Unfortunately, I only got about 20 minutes in because my balance was absolute crap (presumably from fatigue) and I kept falling off. Hopefully, things will go better this coming Tuesday.
Posted by Lindsay Hall-Stec at 4:00 PM 1 comment: 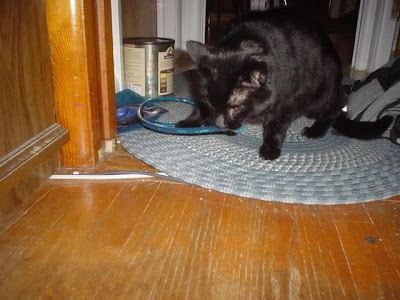 Adam just sent me this picture and I wanted to share. Apparently, it is now a "Campbell-back" hydration system. Actually, it was just sitting by the door to be thrown out. I didn't clean it out well enough after the Iceman and a couple of days ago I discovered the hose was clogged with black goo. I figure that it might be time to cut my losses and replace it.

Posted by Lindsay Hall-Stec at 8:41 AM No comments:

I was going to steal the title from Adam's post from a few weeks ago, but it looks like I didn't remember it correctly. Yesterday was my first attempt at the Big McGowan Hill for the year, but it didn't humble me because I showed up already humble.

Of course, that didn't really help me get to the top. It didn't even help me get 1/3 of the way up. It was way harder than I remembered, but it was important that I got out there in early January. Now I have 9-12 more chances to make it up before the Ouachita Challenge. Ideally, I would be able to climb it 6-8 times in a row before the race, because only then will I get close to the level of difficulty that awaits. A 13-weeks-to-go reality check was just what I needed.

The only bad part is that I discovered an archive of free 60-minute horror films on our cable's "On Demand" channel. It's nice to be able to watch whenever I want without the commitment of a full-length movie, but I probably should not have watched two of them before my ride yesterday. The route goes through some remote wetland and forest in Brown County and it's easy to ride the whole thing without seeing a single car. Not seeing a car is a good thing, except that it does get kind of freaky riding in the middle of nowhere by yourself. There is one particular place that I hate, because there is a sharp turn in the road which leads up a very steep hill for about 100 meters and there is an old abandoned cemetery at the top. Extreme exertion plus old cemetery plus middle of nowhere is not my idea of a good time. I let myself get freaked out sometimes, but it's just such a good training route in the winter that it's hard to turn down.

In other news, I got a haircut over the weekend. I seem to be changing my hair every three months now. I liked my last haircut, but I realized that it looked a little too much like the "the Rachel" circa 1995. So I decided to step outside my comfort zone a bit. The picture below is what I took to the stylist and the final result is pretty similar, except that my hair has less body and I didn't have a professional stylist fix it for me this morning. 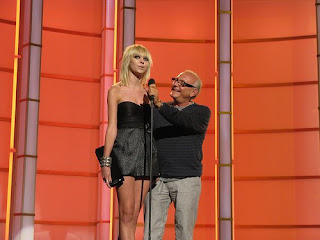