Another month of 2019 has flown by much differently than I expected. Just a few days after we returned from Tennessee, Frank slid out on some wet rocks during a normal weeknight training ride and broke his collarbone. Considering that the two of us had more than a quarter-century of accumulated bike riding with no broken bones, the fact that this was coming for at least one of us at some point was nearly inevitable. That still doesn't make the actual occurrence any less unpleasant, especially since I was just getting back up to speed after my own downtime. 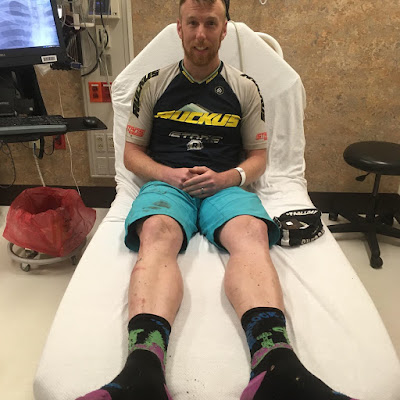 I jokingly told him that we would both look a little funny with our shirts off after 2019. At the very least we're going to end the year with scars and numbness. According to my plastic surgeon, my new boobs are "stunning", and he released me from his care last week. I guess that means no free liposuction in the fall, but I'm okay with that. They are still a little asymmetrical if you look closely, but I'm past the point of caring and ready to move on with my life.

As for Frank, he's still several weeks away from being able to move on with his life. His original x-ray from the ER showed some fractures, but the bone was still aligned correctly, so the orthopedic surgeon said that he did not need surgery. However, at his three-week check-up, the x-ray showed the bone to have completely collapsed. Apparently, there were more fractures than the original x-ray showed. He ended up having surgery four weeks after the original break, so now he is only four days post-op, and it will be at least eight more weeks before he can ride again. 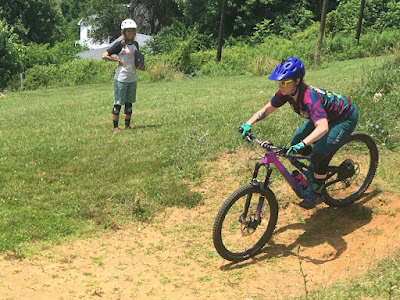 Before his accident, we had signed up to do a Pumps, Jumps, and Berms clinic with Hillary Marques at the Gravity Soul dual slalom track near Frederick, MD. Even though Frank was unable to ride, he and Gunnar came along for moral support and sat in the hot sun for four hours while I practiced jumping.

I can't say that I made any huge breakthroughs during the clinic, but after reviewing some video that Hillary took of me, I realized that I needed to "pull up with my body and not with my arms". Although I haven't been able to practice this on any real jumps since then, I was messing around in the driveway and made some major progress towards a true bunny hop. Unfortunately, I also gave myself a nasty blister on my hand in the process and haven't been able to practice since, but I'm pretty excited about the possibilities this could open up. 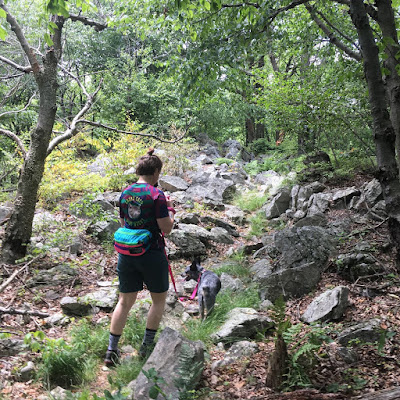 With Frank unable to ride, I've been a bit unmotivated myself. I'm still riding 2-3 times a week, but I've only been to the gym once since he's been hurt. My rides are often short and even less structured than they were before. I guess I've just kind of embraced that 2019 is not my year for bikes.

Because of this, I've been spending a lot more time hiking with Gunnar over the last month. When we first got him, he quickly bonded to Frank, and I didn't really know how to deal with having a smelly dog around that was stressing out the cats. The cats eventually calmed down, and I eventually realized that he was a cute boy, doggo smell and all. However, he was not so quick to turn on his unconditional love switch.

I was taken aback by this at first, but now I respect him for it. I always joked that Clemmie was my real daughter because of her personality, and Gunnar is definitely my long lost son. I had to make the choice the meet that neurotic little doggo where he was and find ways for us to bond. I learned that he likes carrots and actually listens to me more than he listens to Frank, so I'm doing my best to teach him some trick using carrots as rewards.

I also realized that he needs more exercise than regular walks around the neighborhood or backyard zoomies can provide, so I've started using this as an excuse to explore parts of Rothrock that I don't normally see on my bike. Frank sometimes comes along, depending on how he's feeling. It's been fun getting to see new trails and spend quality time with Gunnar. I've even started trusting him to run off-leash and have even done one short bike ride with him running along behind me.

I'm not sure how I'm going to balance dog parent life and training life once I'm ready to try and get serious about racing again, but for now, we're having a good time. 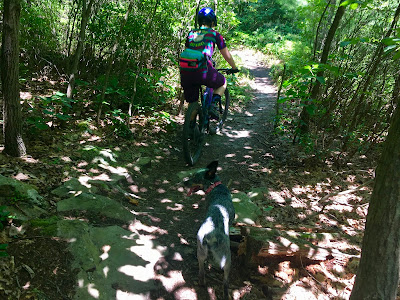 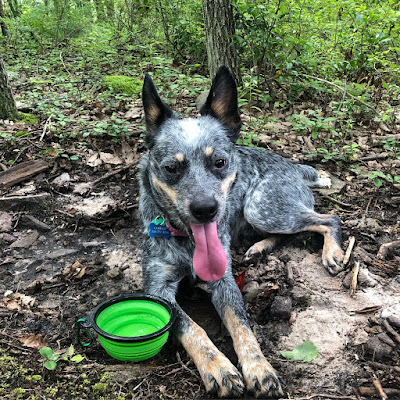 Posted by Lindsay Hall-Stec at 6:29 PM No comments: