As regular readers may know, I have a bit of an obsession with finding the perfect bib shorts. To spare a rehashing a lot of boring details, I will leave it at this: I have not worn an elastic waistband while cycling since 2006 and I have no intention of doing so again. Nor have I ever worn anything across my sternum except for my sports bra and my heart rate monitor strap. Unfortunately, as a short, curvy female, its quite difficult to maintain this streak without the help of custom clothing orders since the 7th grade boys on the Assos design team hatched this thinly veiled plan to look at boobies. For reasons that I absolutely cannot understand, most retail cycling clothing brands have copied this design or dropped out of the women's bib game altogether.
So when I got down to one pair of good bibs with no holes a few months ago, I went on high alert to try and get my hands on something to fill the gap until my next team clothing order. This heightened my awareness of clothing ads on cycling websites, and when I saw an ad for a brand that I'd never heard of claiming to be the clothier of Katie Compton, who I perceive to be not only fast but a woman of discerning taste, I did not hesitate to click through. What I landed upon was the site for Pactimo's custom clothing line, but a few more clicks revealed that they had a retail line that included the Women's Summit Bib Short, which looked exactly like a proper women's bib short should look.
It took me a few months to get a hold of a pair, since the line was apparently just launched last winter, but last week I finally got a tip about a bike shop in Colorado who would send me a pair. Today my package arrived from Castle Rock Bicycle Company, and I was ready to test.
The fit was spot on, with the front cut just right, some nifty ventilation holes in the back, and leg holes that weren't too tight. The quality was good, and although I'm still getting used to the waffley fabric, I think they look pretty good. My only criticism would be that the thick part of the chamois is placed too far back. While sitting on my road bike with my hands on the hoods, I had a good two inches of excess padding extending past the back of my saddle, while I barely had enough coverage in the front. It covered enough and worked about as well as most chamois do, but could have been placed better.
Overall, I have to say that these are the best retail women's bib shorts I've ever tried, and another plus is that at $130, they are less expensive than any of the inferior designs offered on Team Estrogen. Ladies, if you need bibs and don't have a custom order in your immediate future, I definitely encourage you to track a pair down.
I wanted to show what they looked like on a real person, so here are the sweaty, not super flattering pictures that Adam was afraid might be too risqué for my blog. (Sorry, no boobies.) 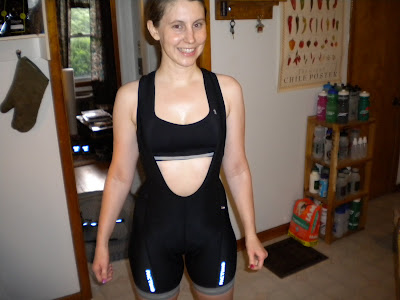 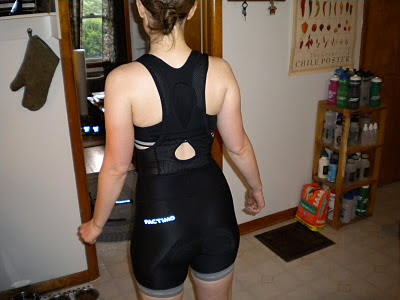 I just remembered one more good thing from the weekend. In keeping with tradition, I've been trying to think of a theme song for the 2010 race season. Also keeping with tradition, it has to be something that was released before I was in junior high. So when I was hammering over the rocky singletrack of the orange loop, feeling like I might just make it to checkpoint to in time after all, I started mentally singing this ode to my hardtail:

She rode a fast machine
Kept her saddle clean
She was most color-coordinated woman that I've ever seen
She was sighting her lines
From her Taiwanese bike
Leaning through the corners with her American thighs
Winning more than her share
Had me fighting for air
I sprinted for the line but she was already there
Must focus on this visualization before my next race.
Posted by Lindsay Hall-Stec at 6:44 PM 2 comments:

I sometimes watch a sketch/stand up comedy show on Comedy Central called Important Things with Demetri Martin in which he does a segment called "Good, Bad, Interesting", in which he explains funny circumstances under which the same scenario could be good, bad, or interesting. While I don't think I can condense my weekend into a triplet of jokes, I think the title pretty accurately describes my experience. However, I will have to go in reverse order for it to make sense.

Friday evening I was invited to dinner at Carey Lowery and Zeke Lilly's hotel. I've been reading Carey's blog for a couple of years, and we keep ending up at a lot of the same races, but this was the first times we'd formally met. Dinner was good and the conversation was fun, and it was nice to get to know them.

Then Carey got a phone call informing us that there were tornadoes headed towards Mountain View. No one really knew where the community shelter was and we were a bit afraid of going out to look for it, so we ended up in the bathtub with a mattress on top of us while we waited for the tornado to pass over. Luckily, it did not touch down anywhere in town, and nearest damage was 20-30 minutes away. Carey posted a couple of pictures from inside the "fort" on her blog.

I knew the start of this race would not suit me as well as the Ouachita Challenge had, because instead of eight to ten miles of rolling road that did not have much extended climbing until the end, Syllamo's Revenge only has about a mile of 11% grade gravel road to break up the 370 person field before the singletrack. I didn't want to get stuck in stop-and-go traffic on the singletrack, so I lined up much further up in the field than I actually expected to finish, and rode exceptionally hard up the first climb. Unfortunately, it didn't help much, because when I got to the singletrack, I was still stuck behind a long line of people slipping and sliding on the muddy, rocky trail. The worst part was that I was having to stop, run, and surge over and over to keep up with the jostling pace, and was suffering from my lack of recovery after the climb. All the climbs after the first one were short, albeit steep, but I found my quads burning in protest at even the slightest upward pitch of the trail.

The first fifteen miles of the race were miserable for me, as my burning legs continued to slow me down more and more. The trail was very slick and very technical, so I had to get off my bike a lot. While hike-a-biking usually relieves immediate pain of steep climbing, I've found that pushing my bike for more than a few steps at a time tends to ruin my legs for riding after that, not to mention the layers of calf bruises from banging my leg on my pedal over and over. Finally, after more than three hours of misery, frustration, and gnats trying to eat my eyes because I was going so slow, I made it to the first aid station and got some fresh water, some clear Heed (my favorite), and a banana.

The combination of refreshments and a decent stretch of completely rideable rolling trail helped me to start feeling human again. I was not in great shape to make the time cutoffs, but it was still possible, so I just rode as well as I could and hoped for the best. Unfortunately, by the time the finished the "green loop", all of the volunteers had cleared out and the arrows on the road had all been worn away. The guy I was riding with and I took a wrong turn, and we ended up doing about four miles of the course over again.

Four miles in Syllamo's distance is a lot. Once we were back on track, I tried to ride hard for a little while to still make the time cutoff, but it was still a long way and I missed it by 30 minutes. So I finished my "spring endurance season" with two DNF's, despite feeling like I'm the strongest I've ever been. I say "spring endurance season" because I have kind of planned my year to have a spring endurance season, focus on XC through the summer, and do a bit more endurance in the fall. So my next chance at endurance redemption is not until the Berryman Trail Epic in October. But I have some Cat 2 races to win and a Cat 1 upgrade to reclaim before then.

Good: Well, at Least I Had Fun

In addition to my Friday night dinner invitation, I managed to find company for every meal while I was there, except for my race morning breakfast, which is probably better as a solo affair, anyway. After the race, I had dinner with a group of people from Kansas City, after I met a couple of them in parked next to me before and after the race. Then I had breakfast with a group from Tupelo, MS, who had stayed in the rooms next to me at the Angler's White River Resort.

It was fun getting meet new people and it kind of reminded me of my teenage years when I would go to camp not knowing anyone and have a big group friends by dinnertime. Being an only child from a very small town taught that if I wanted to do something, that I would probably have to go alone and just hope to meet people when I got there. For whatever reason, I became very shy and insecure in college and forgot those skills, but it was nice reminder that I once had them and with a little practice should be able to get more comfortable making my way as an unaccompanied female traveling to bike races. Of course, I didn't leave Arkansas with a stack of addresses with which I will exchange long letters written in colored ink over the next year, but at least I did leave with a quite a few "See you at the Berryman Epic" exchanges.
Posted by Lindsay Hall-Stec at 12:13 PM 1 comment: