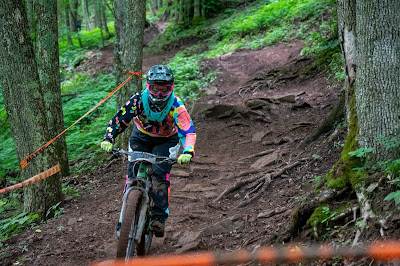 Despite my return to racing this season, I still haven't been great at returning to blogging. Of the four races I have completed in 2021, I've only written about one, and that was six weeks after the fact. The second was simply not worthy of a stand-alone post, and the last two were a mere week apart, during which Frank and I were living out of our van in Boone, NC. Just like that, the 2021 Downhill Southeast series was complete, and I was left pondering how I would sum it up. After some reflection, the answer I found was surprising.

After my second-place debut at Massanutten, I viewed the pre-reg list for Snowshoe with confidence. Two of the women registered for Snowshoe had failed to start at Massanutten, and the other had been a couple of minutes behind me in third. Plus, hard rain was forecast for the weekend, and I thought my previous muddy Snowshoe experience would work to my advantage.

It didn't. What I'd forgotten about my past muddy enduros at Snowshoe was that they scared the crap out of me. I had still been able to soldier on, focusing on steady, non-aggressive riding that minimized mistakes, including walking to avoid crashing when necessary. That approach worked over five stages and ~45 minutes of riding. At the end of my single downhill run at Snowshoe, I found that the approach had landed me DFL instead. I was upset when I saw the results, but my new "chill" attitude towards racing allowed me to almost forget about that by the time we finished the ~15-minute lift back to the village. 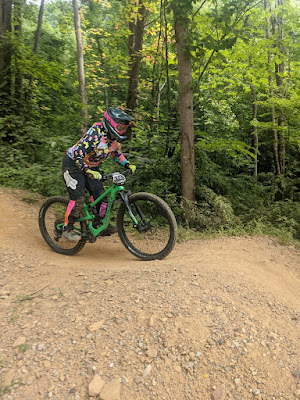 It hurt a lot more a few weeks later when I found myself DFL out of 10 racers a few weeks later at Windrock. Not only was I last, but I was last by a lot. I'd had an issue when I rode high onto a banked turn to let a faster woman pass me, but I lost traction in the loose dirt and fell down the slope into her. We both lost time as we untangled our bikes, and it was probably more for me as I encouraged her to stop asking if I was okay and keep racing. Even with that premade excuse, I did BAD. I couldn't believe I'd placed that poorly out everyone, including several first-time racers. I'd actually been passed by the girl 30 seconds back only to watch her walk technical sections in front of me that I was able to ride, yet somehow she kept putting time on me everywhere except for the most butt-rubbingly steep parts of the course. Like, seriously, how did no one do worse than me? 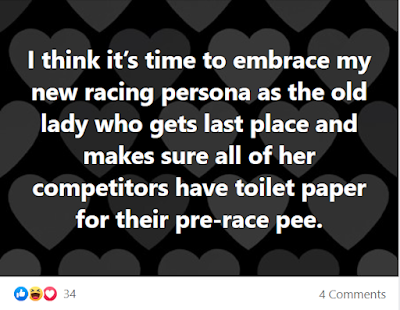 I almost felt the urge to be disappointed in myself for not being more publicly distressed about my results. Like, if I wasn't an asshole about placing poorly, maybe I didn't care enough. It's true; I even shared toilet paper with my competition before the race. I've definitely gone soft. I suppose the sarcastically radical self-acceptance of the above Facebook post after the Windrock was just a minor pressure release for my true feelings. My 25-year-old self's worst nightmare would be seeing myself at 40, getting last place, and pretending that I was "just there to have fun" while also low-key using my age as an excuse for my performance. I also tried very hard to make sure everyone in my category knew I had broken my back last year to feel heroic instead of just dumpster.

I realized that since turning 40, I had begun using my age as an excuse the same way I used to blame my lack of natural talent when it came to race results. As I learned regarding natural talent, although I might not immediately be good at something skills-based, I could always get better than I was. Downhill is undoubtedly a young woman's game. However, I expect I still have a few years left before my myelination decreases and my fear of mortality increases to meet in my inevitable plateau.

Going into the finale' at Sugar Mountain, it became clear that I had miscalculated my forks for the season. To protect myself from being too upset if I did badly during my first downhill season, I had put almost zero effort into getting better between races. I pretty much admitted that after the first race, but I took it too far, barely riding or improving my fitness at all over the summer. I think a tiny part of me wanted to find out if I might be decent without trying, but with every other physical endeavor of my life, that was not the case. While there was little I could do to improve my skills or fitness in less than a week, I made the commitment to myself that I would start caring again.

I still needed to pull it together for Sugar, though, as the one consolation prize I still had on the line for the season was the overall series title. I was set to be the only single crown woman who did all four races. However, my two last-place finishes had let a couple of women with fewer races get within striking distance for the final event.

Sugar was the first course of the year that I actually enjoyed. Once I rode through slowly on my first lap to check out the track, I was confident and even found some flow in my practice laps. However, it rained during the night and throughout race day to take the course from dry and loose to slick. I struggled a bit in the wetter, more technical parts at the top but still felt good on the bottom half of my practice lap the morning of the race.

I got a good starting place for the race. I was third to start out of the 12 women in my class. The first started with the single crown men so she could finish and get back up to race 2/3 open, as well. Then it was two minutes until the rest of us started, beginning with the woman who would eventually win by nearly a minute and a half. I definitely didn't have to worry about her slowing me down. The woman thirty seconds back from had beaten me at Windrock, but she hadn't looked particularly fast in practice. I made it my goal not to let her catch me before the finish. 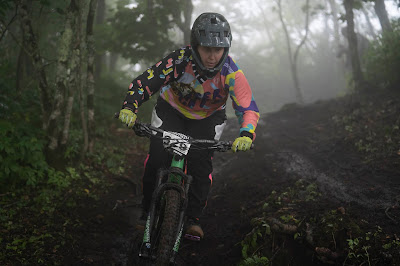 My run was clean save a little tripoding, which is expected in those conditions. I waited at the finish to see that I had not only made it without being caught, but I'd put extra time into the woman 30 seconds back. I ended up 8th out of 12, which is definitively not last, and only 42 seconds separated 2nd-8th, meaning it was the tightest racing our class had seen that season. I would have loved to have made it to the top half, but it was still a nice uptick in my results to end the season.

I quickly did the math, and I saw that I was tied for the series lead. The website didn't say how they would break the tie, but I figured it wouldn't fall in my favor. As they began giving away the awards, they announced other ties that they had resolved based on who did better in the final race. With the other woman's second and my eighth, I realized that I'd lost the series championship by a mere second in the last race.

It was stupid to be disappointed in not winning a series where I hadn't really done well all season. However, as I had predicted at the beginning of the season, just getting myself to the finish line of four races this season was a massive challenge for me. Frankly, no other woman in my category had accomplished the same challenge. 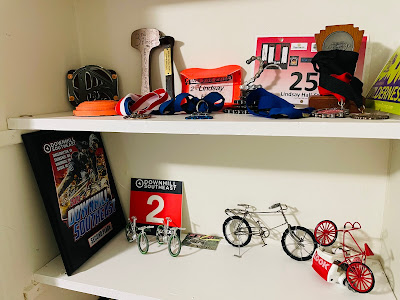 When I got home, I put my second-place series plaque next to the trophy I'd received for winning the MASS Enduro Series in a similar fashion in 2016. How ironic that I'd been borderline mad and embarrassed to win what was essentially a participation trophy in 2016 to being disappointed to getting an inferior participation trophy in 2021. That is such a millennial reaction for me. More specifically, it was such a geriatric millennial reaction of me.

The path I've traveled since I began dabbling in gravity racing five years ago hasn't been easy, but it's been the most satisfying I've had since I started riding bikes in 2003. I've learned that downhill is its own brand of Type II fun that is entirely different from enduro. I was afraid to fully invest myself this season, but now that I understand what I've gotten myself into, I actually want more. My sixth major reinvention as a cyclist may not seem like a rational choice, but let me enjoy my rose-golden years in peace.

My new downhill bike arrived just a few hours after we return from North Carolina, and I signed up for the Fit4Riding program the next day, so I'll be less tired and sloppy in my races next season. There's still plenty of time left for bike park days before winter, and I plan to, in the words of Josh Prater, maximize.

It's still unclear which coast I'll be on next season, but Downhill Southeast or Northwest Cup, I'm looking forward to more downhill racing. 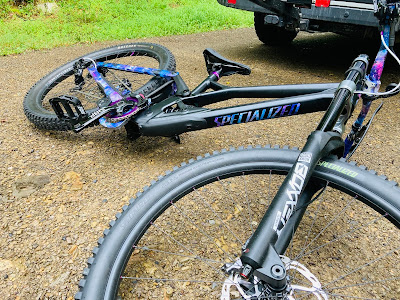 Posted by Lindsay Hall-Stec at 2:31 PM No comments: