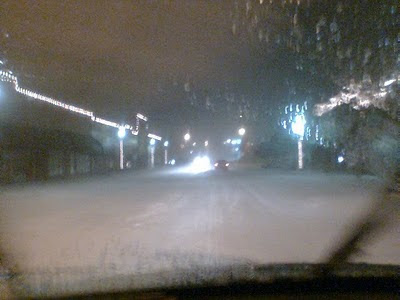 She was going to Stonewall, OK in a Ford Focus
Got past that big McDonald's
You know the one they built up on that great big ol' bridge
Across the Will Rogers Turnpike
Took the Big Cabin exit stopped and bought some Gummi Peaches
At that Indian Smoke Shop with the big neon smoke rings
In the Cherokee Nation hit Muskogee late that night
.....
Lindsay tried to make it, but she didn't quite

That's a more PG version of James McMurty's "Choctaw Bingo"and an account of how I came to spend Christmas Eve in a Best Western in Eufala, OK (main drag pictured above). After a rainy trip across Illinois and Missouri, the road got really slick as soon as I cross the Oklahoma state line. It started with driving 50 in a 75 on said Will Rogers Turnpike, but it turned to a road of slush after said Big Cabin exit. After Muskogee, the slush turned to crazy wind blowing snow across the road, and combined with my iced-over windshield wipers, I could barely see at all. So at 9 p.m., I had been on the road for 14 hours and was about two hours away under normal conditions and who knows how long at 25 mph. I finally gave up and spent the night on Lake Eufala (mentioned elsewhere in the song), and was able to make it in time for a slightly delayed Christmas dinner the next morning.

I tell you all this because it's way more exciting than the cycling portion of my trip so far. Obviously, I didn't get to get up early and have a nice Christmas morning ride as I had hoped and the next day consisted of riding as far as I could in one direction before the road became impassible and then as far as I could in the other direction and then back to my parents' house. I think that was about 1:45 of "riding time", although there was a decent amount of walking over icy patches and even the riding was pretty slow. During the ride the hub battery in my Power Tap died, so I'm not sure of any actual data.

Yesterday was sunny and clear, if windy and cold, so I got out for a little while, but I'm not sure how much. Since I'm so far from civilization, I haven't got replacement batteries yet, and I'm a little iffy on trying to open the hub up with a bench vise myself. I'm torn between thinking this is a job best left to Adam and the opposing fact that riding without a display to look at kind of sucks, even if I'm not really shooting for a specific power. Until it's fixed, my workouts will be "ride to such and such town/landmark and back". Today it will be Tupelo.
Posted by Lindsay Hall-Stec at 12:15 PM No comments: 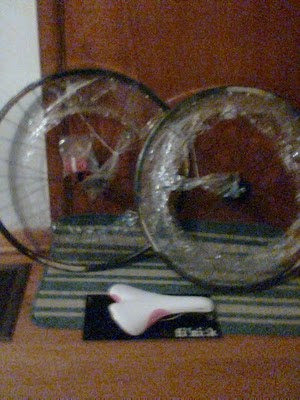 Other than opening "Solstice gifts" (my ploy to find out the contents of the box a bit early), is that I'll be leaving for my sweet Oklahoma Holiday Training Camp in just two short days. Sure, the pros insist on training camps in Arizona and California, but Oklahoma does just fine for me. They don't understand the simple awesomeness of unlimited daylight riding time, since they aren't normally deprived of it, as I have been the last couple of months. Sure, it's not the coolest riding in the world and the mid-50's weather isn't IDEAL, but it's way better than riding my MTB around town in 30 degree weather and darkness or riding trainer.
Posted by Lindsay Hall-Stec at 2:00 PM 1 comment:

Okay, it's not anymore, but I've had that song in my head for the last few days as tried to remind myself that I needed to wake up at 3 am today to register for the Ouachita Challenge. Sure, I probably would have been safe waiting until I got up at my normal time, but you just never know. All divisions were sold out slightly after my arrival at work.

So I've entered my first race for 2010, which is pretty exciting. It's a little weird to think about because I'm getting a much earlier start on my training this year (no missed workouts since last post) and I have the experience of a semi-good endurance racing season behind me, so things should be much less ugly. Let's not forget that I should have a new bike by bike then and that should make me like an hour faster all by itself, right? (eye roll) However, the race is so early that I'm not sure how much intense riding I'll have done or if the weather will allow me to ride off-road before then (in 2008 the OC was my first singletrack of the year).

Of course, my mom is agast that I'm doing the race again this year, especially when I told that they've made the course harder, but I swear this time will be different. No, seriously. No last places for me this year. Promise.
Anyway, now it's time to buckle down and make sure that really happens. In the mean time, anybody want to help me guess what this is? 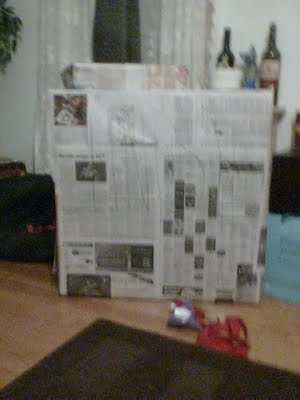 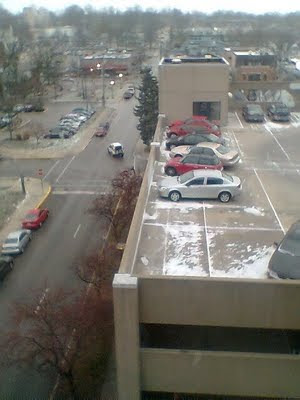 The view from my office window seemed an appropriate addition to this post.
I've been loathe to admit it, but I think that November broke me just a little bit. After a two-week end of season break, it was time to start my winter weight training. I am not a fan of gyms, but I've been forcing myself to enter the HPER or SRSC on the reg to try and maintain the dogged adherence to my training plan that I've spent the last nine months developing. I had a minor blip during the second week when I missed a couple of workouts due to some annoying bug that never bothered to turn into full-blown swine flu. After that, I was in the gym and on the trainer like I actually enjoyed it or something. That lasted for about 10 days or so, during which time I made sufficient progress in listening to David Sedaris' "Dress Your Family in Corduroy and Denim" on my iPod and even felt like I might sorta be getting a bit of bike fitness back.

Unfortunately, the first three weeks of weight training were really crazy work-wise. During my 10-day trainer binge, I was also trying to hold myself together while I was having to go to the library every evening to help train students a on a new student activities system that I've been helping to set up for the last couple of months. I did everything that I was supposed to, both for work and training, but when Thanksgiving week arrived the next week, I found myself trying to coast through a three-day workweek with no energy for either.

That was the point where I began the hypertrophy phase of the weight training, which is the hardest. I did my weight workouts like I was supposed to, but I would come home after work and fall asleep on the couch in my work clothes. During those two weeks, I rode three times, not counting cross bike trips to the gym. One was the Gravel Grovel, and then a couple of easy Sunday rides on the road bike.

Now it's December and hypertrophy phase is over. I have four weeks of weights left, but it's only 2x a week and the workouts are easier. It's time that I reaqquaint myself with the bike, but I'm just having such a hard time making myself ride trainer or ride in the dark. Part of the problem is that I'll be back to outside daylight riding on the reg after the first of the year, so I'm kind of letting December slip away. Unfortunately, my fitness is slipping with it and I'm wasting an opportunity to get a head start on 2010.

So, I'm not sure what my intentions for this treatise are, other than "admitting that I have a problem". Perhaps it will be a bit easier to get on the trainer tonight, knowing that the eyes of the blogosphere are upon me.
Posted by Lindsay Hall-Stec at 9:39 AM 3 comments: