I didn’t post on Monday because a) I was bummed out after my weekly phone call with my mom because being exceptionally chilly towards any attempts I make to tell her about our wedding plans as they unfold. I don’t fully understand this, but I haven’t asked for further explanation because we’re unlikely to change our plans based on it. I think that basically the problem is that the timeline that is right for her is not what is right for us, and being all grown-uppy this time around, it is very important to me that this marriage is neither rushed nor pressured and gets the proper level of celebration that it deserves. b) My shoulder was in excruciating pain due to a sudden uptick in MTB volume, a quick trip to Florida, and maybe from a crash that I had last week. c) I had nothing exciting nor witty to say.

I almost let myself off the hook on the whole weekly blog post thing, but I’ve decided to ahead with it. Besides, I took yesterday off from work to recover from the lingering project stress and the work conference in Orlando that I had to attend Wednesday-Friday of last week, so today feels like a Monday. Wednesdays off are the best, because it breaks the workweek into two very manageable two-day segments and it allows for a big mid-week ride with time to recover between weekends.

It’s a bit ironic that my goal of weekly posts is to find improvement in the past week, and for the last two weeks improvement has been incredibly easy to find. They’re come so easy that it’s hard to find anything interesting to say about them.


It’s been 3.5 weeks since I got back on the bike to find that my sitbone was still hurting despite having taken two-weeks off. However, I’ve discovered that on my plan of riding as much as I can stand and twice-daily icing, it’s actually improved more than it did on complete rest. Yesterday I completed a difficult and rocky 3+ hour mountain bike on it and the pain was at about 20% of what it was a month ago.

With work stuff, wedding stuff, and being out of town last week, I haven’t achieved the kind of metronomicly perfect consistent training I would like. I have, however, been ramping up better/longer/faster rides on the days I am able to ride, and I’ve been smashing Strava PR’s left and right. So I’m actually pretty proud of how my riding is going, but I also feel a little silly bragging about Strava PR’s. That is where I’m at, though. I’m improving quickly, but I’m still a long way off from feeling confident enough to pursue any real race goals prior to cyclocross. I’m okay with that, though, as it will save me money, and I’ve been thinking a lot lately about how I’ve always been in such a rush to race that I never gave myself time to actually get fast first. Maybe this summer will that time for me.


Posted by Lindsay Hall-Stec at 2:51 PM No comments:

The last couple of weeks have been a bit crazy. I’ve been pretty stressed out and exhausted due to the launch of a new project at work. The good news is that this marks the fourth major enhancement initiative that I’ve lead since the first of the year and also the last for a while as our team’s focus will be on doing what is necessary to maintain our current functionality while Penn State switches over to a completely new student information system in the fall. During this time, I’ll be stepping back into a more supporting role while the more technical and data quality team members focus on the conversion.

The upshot of that worky-work blah blah blah paragraph is that I haven’t had much mental capacity for blogging lately, but it’s looking like I should have a few months where I get to rest my mental capacity a bit. Hopefully, I can use that excess capacity on bikes and wedding planning.

The other bummer of the week was that we were really stoked to secure a couple of local mountain bikers’ soon-to-be-built mountain bike centric lodge/B&B with an on-site pump track as our wedding venue for next May. Unfortunately, a couple of days after we worked out the details with them, their contractor gave them the bad news that the construction would take much longer than originally planned.

This meant that we would have to find a new venue or wait 2-3 months longer for the wedding. After a night of being super bummed and not sleeping very much after the already stressful two weeks before, we Googled away and found a pretty good venue that was available for April 30, 2016. It costs more than we had hoped to pay, and still falls into the more “traditional” venue category among the State College wedding scene. I did, of course, go through a pouty phase where I kept saying that #gnarwedding2016 would have to be changed to #basicbitchwedding2016, and that we should probably just serve Pumpkin Spice Lattes. However, I’m starting to feel a renewed since of energy about it, and hopefully we can find a plenty of fun (and cost effective) ways to make it “us” even without an on-site pump track.


Taking a back seat to all of this was the fact that I did finally start riding bikes again after my two-week hiatus to try and heal up my inflamed sit-bone. The bad news is that two weeks of no riding didn’t actually didn’t help it much, so now I’ve just been riding as much as I can stand to, sitting on an ice pack for 20 minutes twice a day, and taking a lot of turmeric supplements to try to cool the inflammation.

I actually got to ride mountain bikes both days over the weekend, and the pain stayed within a tolerable level. All training plans and racing plans are kind of out the window for the summer. Right now I’m just going to ride as much as I can, start doing intervals once a week when I obtain a power meter with my next paycheck, and hopefully be ready a cyclocross season that is better than the last. Once again, the past two weeks have been a lesson in the futility of getting too attached to plans, so I guess I’ll just keep doing the best I can with what I have for a while.
Posted by Lindsay Hall-Stec at 4:33 PM No comments:

I've heard the term "points of engagement" a lot in the last week, and it definitely seems that I need to squeeze some sort of cycling metaphor out of it. However, I haven't been on a bike since my last post in an attempt to get my injured sitbone under control before the weather gets truly nice, and the past week's events need very little analysis or metaphor to make them interesting - at least to me. 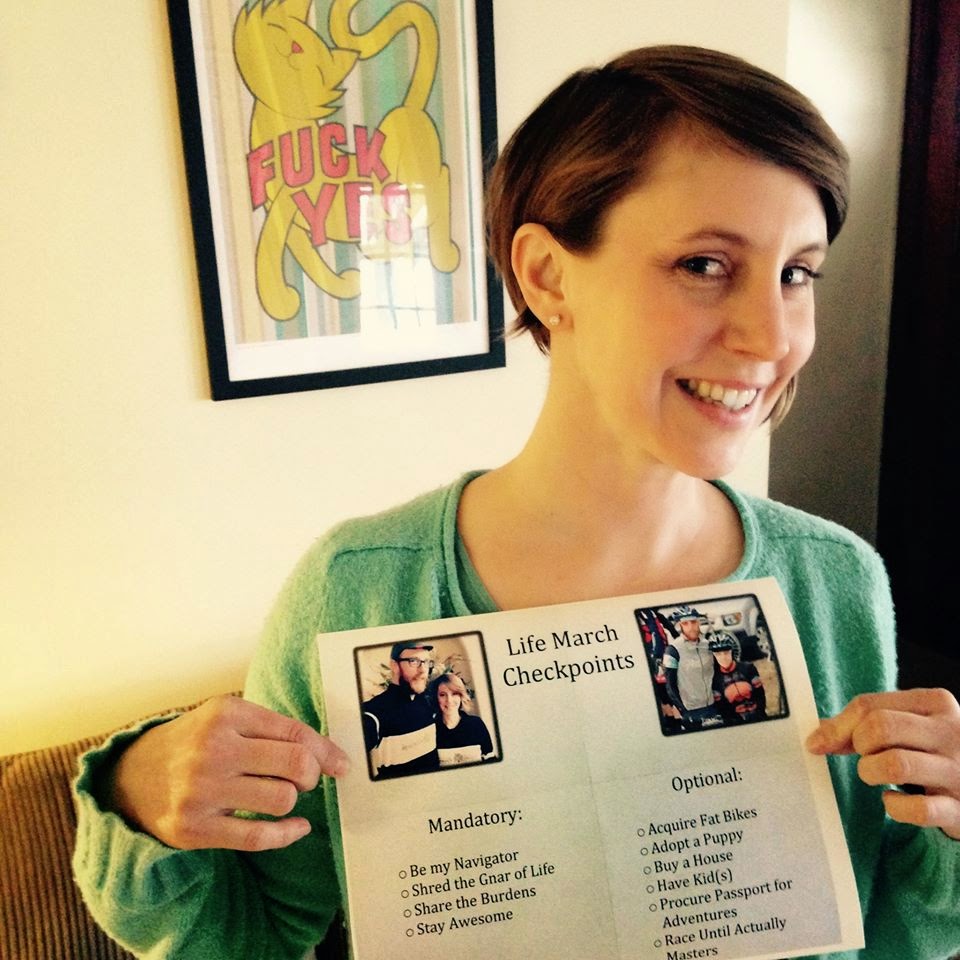 When I arrived home on Tuesday night, there was a "Registration" sign on the door. I was very confused, thinking that it was perhaps the largest, vaguest note ever to inform me that Frank had gone somewhere for the evening. When I came in he handed me a sheet of paper, with the following "Life March Checkpoints":

Mandatory:
*Be My Navigator
*Shred the Gnar of Life
*Share the Burdens
*Stay Awesome


He then gave a speech about our Insta-romance based on a mutual love of bacon and asparagus, and asked me to be his partner for life. I actually don't remember the details because I was all nervous and having a "Whoa, it's really happening!" moment. Then he gave me the diamond earring that had once been his mom's ring and then was worn in his dad's ear for a while.

It turns out that he'd planned to propose at the Death March, but when we decided not to go, that messed up those plans. It's a bit of a bummer, since that's sort of what I'd fantasized about happening, but in the end I'm still glad we made the decision that we did.


He also got me not one, but two pairs of Industry Nine wheels, which is where "120 points of engagment" enters picture. The pair that he actually had in his possession were cyclocross tubulars with pink I-9 hubs laced to HED Belgium rims. There is apparently also a pair of road/gravel wheels on the way with turquoise hubs and pink spokes. I did need both pairs of wheels, as I'm trying to turn my new TCX into a multi-purpose machine that be used for road, gravel or 'cross with a quick wheel swap. I never imagined that I'd be doing it in such style, though!

Saturday we went and chose a setting in which the diamond earring will become a ring. The beauty and curse of having a guy let you pick out your own ring is that can have *exactly* what you want. Being me, I quickly whipped up the idea of the perfect antique-inspired bezel setting, sapphire halo, and band that was neither too gaudy nor too plain. Of course there was nothing like it in stock at the jewelry store, but after an hour and a half of watching the woman work the ring design CAD program, we got as close as was reasonably with the bounds of our "resources". Frank kept saying, "See, this is why I let you take care of this part." I insisted that I would have been happy with whatever he picked out, which is true, because I could be wearing it already. At the same time, I keep telling myself that it's worth the 3-4 week wait for the perfect ring that I'll be wearing every day for the rest of my life.

As you may guess, the attitude change that I badly needed last week kicked in pretty easily after the happy surprise, but it was also a good reminder to keep myself open to possibilities instead focusing on what's going wrong.
Posted by Lindsay Hall-Stec at 1:11 PM No comments: