A few weeks ago, Jez "wanted" an Anthem X Advanced 29er.  Well, yeah.  I suppose that maybe it's not so obvious to everyone, but I really just don't even look at bikes that aren't Giants.  Since Giant doesn't make a singlespeed frame, I might cheat with on them with a custom Shamrock Cycles model if I had the funds.  In general though, if I were going to buy a $9000 mountain bike (or even the wholesale cost that I would actually pay), it would go toward the nicest model in the Giant line, which is currently the Anthem X Advanced 29er.

However, I'm so behind on lusting after the newest, coolest thing in Giant's press releases each spring (I really just need some lighter wheels for my aluminum hardtail 29er), that I pretty much skimmed right over the sparkly new carbon fiber delight that was the focus of the press releases until my eyes landed on this instead: 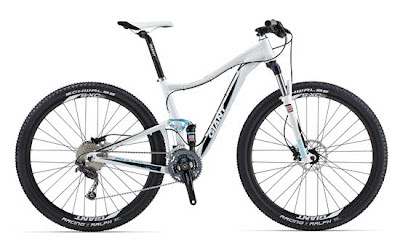 Not carbon fiber, but a thing of beauty nonetheless.  Probably about a 27 lb. thing of beauty if one tried to race it exactly the way it's pictured.  Of course, I would never leave it the way it's pictured.  White bikes are the perfect canvas for pinkification, and the light blue accents would coordinate nicely.  It's kind of a shame about the fork, because it's quite pretty, but doesn't really meet standards otherwise.  You're going to have go for the "girly murdered out" Anthem X 29er 0 W model if you want better parts (it's been getting great reviews).

As it is, the 4 W model is just affordable enough to make think that I can squeeze it out of my budget, but then I remember that I've budgeted for exactly 0 new bikes this year.  And if I did spend the money, it should be on improvements to my hardtail, instead of pouring more money into pretty but underspec'd bikes that I intend to upgrade beyond adding pink highlights and never do.  It's fun to imagine how it would look, though.
Posted by Lindsay Hall-Stec at 9:54 AM 2 comments:

We've tried to wash our hands of all of this
We never talk of our lacking fast twitch
And how we're blown out and slogging
With our heads on the floor
So we jumped on some bikes
And when we couldn't really sprint, we'd say

I've been remiss in my blogging since what I'd hoped to be my Billy Brubaker Moment at Ceraland has so far not really come to fruition. There have been a few notables over the last few weeks, but nothing that seemed worthy of a full post.  However, as I stood in the gym waiting to do my second set of 155 pound deadlifts, which are getting more comfortable and less back-threatening, "The Freshman" by The Verve Pipe started playing on the "all the good songs from when I was in high school" Sirius radio station they usually have going in the afternoon.  This song always make me think of myself and my other frequently injured college running buddies for some reason, and along with thoughts of Jamie's Tweet and Meredith's blog post got me inspired.

I had my "real crit" debut last weekend at the McDonald's Capital City Criterium in Frankfort, KY, but I haven't really wanted to do a race report all week, because I got next-to-last.  Or I won the sprint for not last if you want to look at the glass as half-full and want to generate a lot of "Likes" on Facebook from friends who you suspect didn't really read the whole statement.  I wouldn't call the race terrible or anything; just another step on the what's seeming to be really steep learning curve.  I made it 40% of the way through the race before I got dropped, so that was a bit of improvement.  I might have made it longer, but I took a risk that didn't pay off.  I knew that part of the reason I was struggling was that I was stuck at the back of the pack, so on a straight I rode up to the front and jumped into second position when the train got messy through a corner.  Wow. Second wheel is sooooooo much easily than the back of the pack.  I just have to learn to get there and stay there without feeling like an asshole.

The asshole feeling was what did me in.  I felt like I should take a token pull to absolve myself for cutting into the front of the pack.  Unfortunately, when my token pull ended was about the time the 1/2/3 girls lapped us, and as I was sucked back to the back, the front girls mixed with the 1/2/3's as they had been explicitly told not to do.  The increased pace plus being back in the yo yo zone did me in.  I rejoined for a bit when they came around and lasted until the pack sped up again for a prime near the end of the race.  Finally, I found myself overtaken by a girl who was dropped early in the race but was pulled back up to me when the pack lapped her (karma much?).  I couldn't shake her, so I sat up and waited for the last straight.  I would be damned if I let her relegate me to last place, so I followed her through the final turn, we started to speed up, and I dug deep to put a half a bike length on her before the line.

So, despite my poor result, I had a good time and put many of the crit-related fears that have built up in my mind over the years to rest.  It actually seems like a discipline that I could get into for the "off-season", since I'm currently burnt out on XC mountain bike racing and my brief experience with open road racing didn't impress me much.  I've just got to keep working and learning until I can keep myself buried for the entire race.  Then we can see how my sprint fairs against the front-of-the-pack girls. I know that as a former runner I'm supposed to assume that I don't have one, but the 155 pound deadlifts say that maybe, just maybe, I might have more than I think.
Posted by Lindsay Hall-Stec at 1:40 PM 1 comment: