I keep telling myself that I'm going to sit down and write a blog post that isn't a race report, but I just haven't been inspired. I guess it beats a day-to-day accounting of the average power of every interval I perform, but I've gone too far in the other direction.

Anyway, I had a nice trip back to see my parents in Oklahoma during the first week of July. Since my impending surgery interfered with my normal Christmas trip, I hadn't been to see them in 15 months.

While I was there, my mom and I ran the annual Fireball Classic 5k. It had been a running joke since last summer when she was reading the results of last year's race in the paper and decided that she needed to the race "someday". While I was in the hospital, we decided that we would both do it this year and started in on the smack-talking about who was going to beat who. However, since I healed and got back to cycling faster than I expected, I really didn't do much running in preparation, except for an 800m warm up before my gym sessions. As the race grew closer, my mom seemed to grow unsatisfied with the idea of just walking the 5k and wanted to run, but she was also not very confident in her ability to do so. She set the goal of "finishing in a number less than [her] age".

As it turns out, she finished in 37 minutes and third in her age group, but didn't get her medal due to a mix-up. I also finished in a number less than my age, but at 29:18, it wasn't by much. I still figure that sub-30 is acceptable since I don't really run anymore.

I returned from Oklahoma around 9 p.m. on Friday night, only to unpack and then re-pack the car to go to the Rangeline Rampage time trial the next morning. I wasn't really thrilled about the idea of getting up early and racing the morning after an all-day drive, but after reviewing the results from the Muscatatuck short track race, it looked like I needed to go get the bonus points if I still wanted to be in contention for the DINO series championship. I'm almost embarrassed to admit that I care about winning the series championship, but I kind of do.

Unfortunately, all of the voices that were telling me to forget about the stupid bonus points and stay home, go to the farmer's market, and do my scheduled 2 x 20 minute intervals were right. I was completely lacking in mojo, and while I thought my Anthem would be the right bike for a twisty, technical time trial, I'm just not comfortable on it anymore. Things went from bad to worse when I was grasping at straws to try and hold off the girl that started 30 seconds back, then endoed coming off a higher than expected log drop/jump thing. My head was ringing, it took a little while until I felt like getting up. When I did, I carefully traversed the rest of the course (9 bonus points still beats 0).

I thought I was okay, but a splitting headache, nausea, and difficultly concentrating on the drive back to Bloomington had me scared that I had a concussion. I stopped by Bloomington Hospital ER before going home, and it turns out I just "rattled my brain" a bit. I'm not really sure where the dividing line is, but I guess that if it was a true concussion I would have been too loopy to complete the race, much less a two-hour drive after. Some Tylenol and a nap cleared up the majority of the headache, and it still comes and goes a few days later. I also have a killer black eye now that the swelling had started to move from my eyebrow down to the lid. 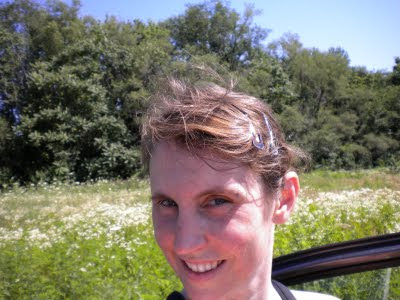 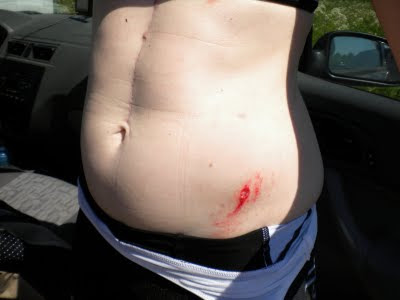