Me (and My Back) Are Back

So...2020 amiright? A lot of stuff has happened since my last post, but the one thing that didn't happen was me racing bikes again. I kept thinking I would write something early in the COVID shutdown, but unlike all of the supposedly bored people I kept reading about, I remained as busy as always. Eventually, I got so behind on the events of 2020 that I didn't know where to start and considered abandoning this blog altogether. Blogging is a dead art form these days, what with the YouTubes and all.

However, a few days ago, I re-read some of my mastectomy posts, and I realized how helpful this dead art form was for me. Because I didn't end up racing in 2019, my posting dropped off drastically as soon as I was allowed to "resume normal exercise" following my second surgery. In retrospect, I can see how rudderless I've felt since then, and I initially attributed this to a lack of racing. A string of disruptive life circumstances has continued near-constantly since my mastectomy recovery, and it emotionally disconnected me from racing and bikes in general. I don't miss wrapping my self-worth up in my race results and can no longer fathom crying after a race. However, I do miss that sense of purpose.

The biggest challenge of resuming blogging after a long break is knowing where to begin catching up on what has been missed. In this case, I think it makes sense to pick up where I left off, although not in the way one might expect. I lost my sense of purpose and stopped posting regularly upon my recovery from major surgery. In that case, it is only appropriate to pick it up again under similar circumstances. You see, on the Fourth of July, I pushed myself off a rock drop Snowshoe without a proportional push to my bars and fractured my T7 vertebrae and a few ribs.

Snowshoe hadn't opened until that weekend due to COVID. It was only our second bike park trip of the season after visiting Thunder Mountain a couple of weeks before. Despite only two bike park days in 2019 and the late start in 2020, I had been riding with a confidence that I'd never had before. We visited North Park in Pittsburgh to check out their jumps and freeride line at the end of May.  I was pleasantly surprised when I was able to just go out and hit drops bigger than I'd ever done before despite having not having done a drop of any size in a year.

I overcame my Centre County agoraphobia today to go try out some jumps and drops in Pittsburgh. North Park’s little freeride line is really well built, and I was able to do bigger drops than I ever have before like it was nothing. #senditsaturday

I arrived in Snowshoe eager to progress, although I knew their janky rock drops would be more challenging than the smooth takeoffs and perfectly sculpted landings of North Park. I was determined to hit the log drop on Lincoln Log before the weekend was over, but I began to doubt myself when I realized how slow and rough the entry was. During my second run of the trail at the end of the first day of riding, I skipped the log, but I felt like I could hit the 3-ish foot rock drop a turn or two later. However, when I came around the bend, I saw Frank stopped above the drop, which caused me to lose my nerve, as well. We were well within sight of riders going back up on the lift, and their jeers of "just stay off your brakes" didn't make me feel any better.

Fast forward to the next morning when I set out on my first run with renewed determination to hit both drops on Lincoln Log and move on with my day. Frank and I sessioned the log drop, and after a couple of roll-ins, I completed it, albeit with an ugly landing. A less stubborn person would have taken the ugly landing as a sign to just roll back to the lift and focus on other things for the rest of the day, but it was me.

I paused for a few seconds to compose myself and rode straight for the rock drop, but made a last-minute switch in my line choice. As I rode off, my front wheel dove, and I could see the ground come up way too fast beneath me. I landed on my head first, then my upper back, before my body came to a full stop, and my bike ended up somewhere downhill. I did a quick check to confirm that I could still feel and move my arms and legs, but the pain prevented me from moving beyond that. I just lay there crying and moaning until Frank found me.

Luckily, the person who came along next does ski patrol in Michigan in the winter, so he got to work on the boilerplate trauma check. This time I benefitted from being within sight of the lift, as all the onlookers were able to direct the bike patrol to my location relatively quickly.

The bike patrol arrived, and I began my harrowing journey to civilization. I passed all the initial checks for a spinal injury, and all of my pain was to the right of my spine, so the bike patrol guy had me walk to the nearest clearing. It wasn't far, but every step was excruciating. I joke that Frank slow danced me down the hill, as I put my hands on his waist as he slowly walked backwards downhill to lead me.

At the clearing, an ATV pulling a trailer with a stretcher picked me up and drove me to the bottom of the lift for an ambulance to pick me up. I was sorely disappointed to arrive at the ambulance to find that they could not give me pain meds because there we only EMTs and no paramedics on board. After a 30 minute drive to the nearest hospital, I finally got pain meds and a series of CT scans. They diagnosed me with the T7 vertebrae and rib fractures, along with a partially collapsed lung. They transferred me to a helicopter to the WVU hospital in Morgantown, where I could receive proper treatment. 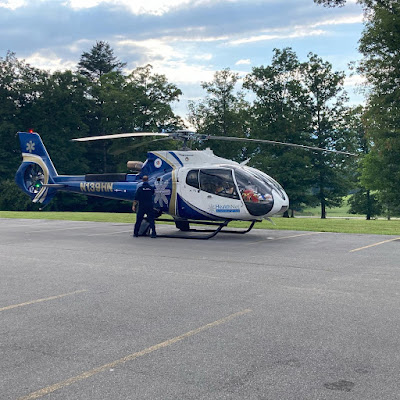 The next morning, I had surgery to repair my fractured vertebrae, which meant fusing it to four others, two on each side, using titanium rods and screws. I'm fortunate that this happened in the least flexible part of my back, so I won't lose a ton of mobility in the long-term. Once the surgery was over, I didn't need a back brace or anything, and they made me start getting out of bed to use the bathroom within hours of the surgery. By about 36 hours post-op, I was able to take a short shower and freely get out of bed to walk around as needed. I still needed a ton of pain medicine to function, and spent most of my time sleeping, but my rapid independence was pretty amazing. 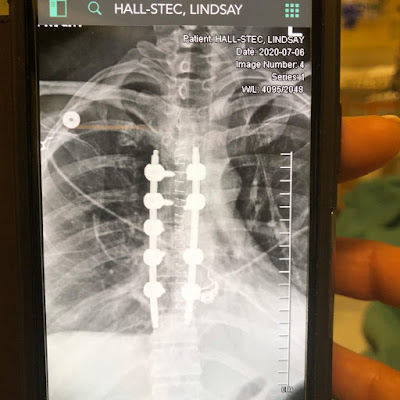 I had to stay in the hospital a week while my lungs recovered, and the doctors made sure I was safe from fluid build-up in my chest. Once I was home, the next few weeks were a saga of pain management. Since I had already been working remotely for months due to COVID, I tried working part-time as soon as I was out of the hospital. However, it was four more weeks before I could stand to sit upright at my desk for more than an hour straight, so I got really good at taking Zoom meetings in bed. Around five weeks after my injury, a thorough cupping session with Jason helped me break through to tolerating work and everyday tasks, like walking the dogs. 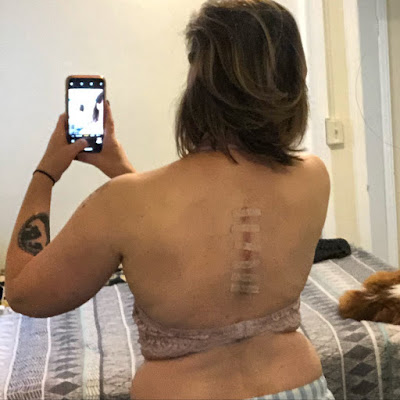 I was given permission to "ride rail trails and stuff" at my six-week follow-up appointment with my spinal surgeon as well as some light PT exercises to do. I've ridden my full-suspension mountain bike on gravel a couple of times a week since then. Still, I've been pretty careful not to overextend myself until I hit the three-month mark when the spinal fusion should be fully set enough to support my lifestyle. Some new flowy beginner trails opened in State College last week, and I've ridden them a couple of times. However, the fact that I'm sitting at 17 out of 21 among women on Strava on one of the two downhill-only sections is a testament to how careful I'm still being.

My three-month follow-up is on Thursday. I'm expecting to be released to start lifting weights again and generally return to everyday life within reason. My surgeon came to check on me the morning after my surgery and laughed when she saw that I was watching American Ninja Warrior. I pointed and asked if I would be able to do that within three months. She said no, four. It's been a nice change from my plastic surgeon's vague instructions after my mastectomy to being given very clear guidelines as to exactly what I am and am not allowed to do at various points in my recovery. Until the last couple of weeks, I was often "allowed" to do things well before I felt like doing them.

So here I am at the end of two full years where life has kept me from racing entirely and away from bike parks much more than I would have liked. Another long winter stands between me and my next opportunity to do either. This is a good thing in many ways, as I need time to get my body strong enough to race and send it again. It's also going to be tough to motivate myself to get through the blah stuff to benefit the fun stuff that is still many months away, though. Perhaps starting to write again will help.

Posted by Lindsay Hall-Stec at 1:16 PM No comments: