Sly Fox 'Cross: Out With a Bang

Now the majors called up ol’ what's her name
And one more Cat 2 rises tall
And suddenly we're all grown up
And this Cat Squad ain’t quite so small
But I wouldn’t miss that middle size race
In the in ‘burbs to Philly’s west
With sweet off-cambers, and local beers,
And vegan baked goods, and all the rest

They brew their beer with Belgian yeast.
We bake our cookies egg-free, no gel’tin.
That race director, what’s his name?
Well we can't even spell it.
We don't worry about our upgrade points.
We just hit the run-up and dig deep.
There's nothing like the view from the cheap seats.

I spent the past weekend in Philly with Frank, as it was the annual conference for the National Communication Association, the biggest gathering of the year for academics in his field. Although I admit that driving into Philly in the Lime-a-Bean alone on Friday night and sleeping a hotel for two nights probably weren’t the best for my body and brain, both of which have already been driven pretty far into exhaustion lately, it was fun to finally get to witness the phenomenon of “NCA” to which my husband disappears every November. I also got meet a lot people who I previously only knew from their Facebook profile pictures over the last 3.5 years. 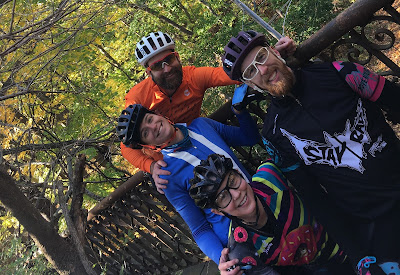 The other upside was that my birthday was on Saturday, and I got to spend it with my Laser Cat friends. Frank and I finally got to meet “Mother Belmont”, as the team lovingly refers to the Belmont trail system, which is known for its Thursday night hot laps and for its twists, turns, and logs. I was actually pleasantly surprised by the trails, which is likely because I have mostly heard stories from people who first learned to ride there or at least weren’t that experienced when they first took them on. I went in with the expectation that it would be slow and frustrating the first time, but it was actually pretty fun. It was a great opportunity to employ my recently-improved wheel-lifting skills that I developed at the Take Aim cycling clinic the previous weekend. 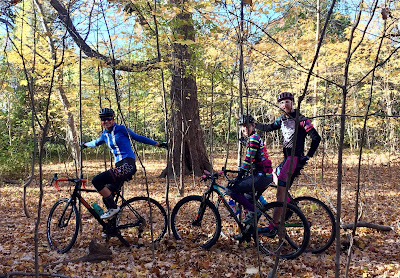 (I realize that I never posted about the clinic, but post-Raven Enduro depression, lack of sleep, potential boob surgery, and Trump elections all conspired to destroy my blogging motivation the past couple of weeks. At least the boob surgery situation looks to not be that bad. I just have to get some benign lumps removed as a preventative measure on December 2, and according to the surgeon, I can be back on the bike the next day.)

Sunday was the Sly Fox Cross race, which, despite my ‘cross ennui of late, I wouldn’t miss because it is the best race in the in the Mid-Atlantic region and an important fundraiser for our team in the form of the second annual Team Laser Cats bake sale. I was certainly tired from the weekend so far, but I figured it was my last “real” race of the season, so what’s 40 more minutes of hard riding for the year? 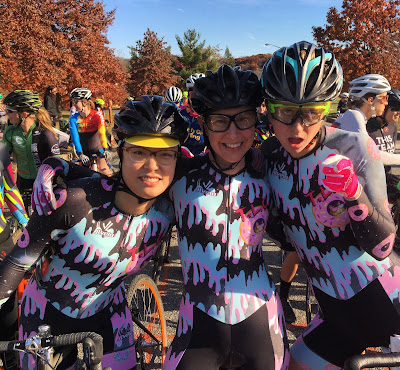 Because Sly Fox wasn’t part of a series this year, the call-ups were by order of registration, and I was the second one to be called up based on my motivation being much higher whenever registration had opened. This didn’t really help my start at all, as I was distracted by the crowd and a million other thoughts, and I had a very delayed reaction to the whistle. I slid backwards through paved opening straight, and got caught behind a crash as we entered the course in earnest. By the time I got untangled from the girl most of the field had flooded around me, but rather than panic, I just stood up, tightened my shoe, and calmly started riding my bike. 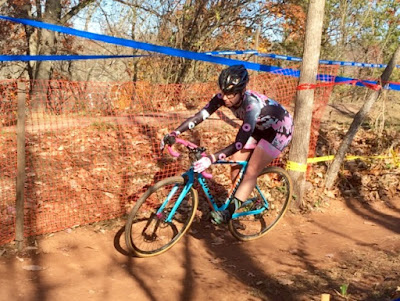 Thus began three laps of working my way back through the field. It was nice because I was so past caring what my result was, and my main motivation was the technical nature of the course and not wanting to be stuck behind slower riders on the features. It apparently worked for me, because I picked off a lot of people. The last lap was a little lonely, as I could no longer see anyone in front of me to chase down. I knew my teammate Michaela was up there just out of sight, but when I met her in pretty much the exact same spot that I had in the last lap, I knew I hadn’t gained any ground. I did my best to just stay on the gas and ride out the final eight or minutes of my 2016 ‘cross season.

I finished pretty satisfied with my effort in working my way up through the race, but it was a pretty big field, so I figured I was still in the bottom half. I wasn’t in a huge rush to look at the results, so when I finally started to mosey in that direction, I saw Frank coming toward me making jazz hands. At first I thought he was just happy to see me, but it turns out that I got 9th out of 30, which was by far my best placing since moving to PA.

Despite my overall short and disappointing ‘cross season, I was able to go out with a bang at Sly Fox. I can already feel my November SAD lifting, because now I can actually proceed with the “off-season” that I’ve been planning for months. It’s been four years since I took a few months to back off the bike and hit the weights hard, but every time I’ve done so in the past, I’ve had awesome results. We’re visiting my parents for Thanksgiving this year instead of Christmas, so once we’re back from that, we can start a solid three months of weights and rollers without much interruption. (Boob surgeries and a very short Christmas trip to Florida aside.)

So even though my SAD started early this year, it looks like I’ll be able to shake it sooner, as well. Right now I’m feeling very motivated and hopeful as I start laying the foundation for big things in 2017.
Posted by Lindsay Hall-Stec at 2:09 PM No comments: