I guess three weeks (minus that one itty bitty race) was the appropriate amount of time off before starting to train again for the 2012 season. When I counted out on my calendar from January 1st to the Ouachita Challenge, I came up with the odd, but not necessarily unlucky, number of 13. That meant one spare week after carving out three of the lovely four-week training blocks by which we cyclists like to map out our lives. So, extra week of taper right before the OC or extra week of break before the season? Since the first two weeks off the bike flew by largely unnoticed due to holiday stuff, I was really glad I let myself have one more week to just be at home, chill, and a focus on the first few days of my Whole 30 before starting training again.

I knew I'd made the right choice, because by Saturday I was ready to dedicate this song to my road bike:


It probably didn't hurt that the weekend was sunny and unseasonably warm for January, although I still ended up in pretty much full winter gear on Sunday morning when I woke up to 27 degrees and didn't feel like sitting around until it got warm. I just got out for a couple of hours of base miles each day, which was surprising tiring after riding more than 40 minutes so rarely in the last few months. Regardless, I'm happy to be "training" again.

I'm also getting pumped about taking on the Ohio Spring Race Series this season. Given my limited road racing experience, my biggest goal is just to stay in a position where I can watch what's going on and learn about racing tactics. It will be a bit of a departure from the "just go hard until you get to the finish line" nature of mountain biking and 'cross. I think what used to turn me off about road racing is suddenly becoming intriguing.

Finally, the bike inventory reduction from the sale of my Anthem didn't last too long. I've been wanting one of these little cupcakes since the 2012 Giant catalog came out, so I finally decided to spring for one before it went out of stock. Adam has the more manly version that he uses for commuting and seems happy with it. 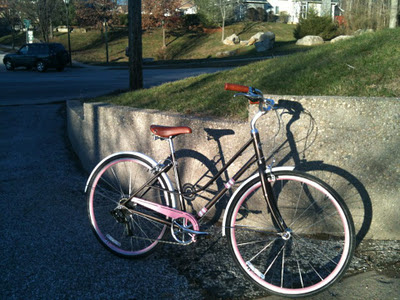 Once I get it hooked up with a basket, Jake can be relieved from commuter duty and reverted back to 'cross bike mode. I decided I wanted an "ambassador bike" on hand to lend out to girls who would like to try 'cross but aren't sure enough to commit to a bike purchase. Potential situations include but not limited to: Sarah F. successfully convincing her Little 5 team (or any Little 5 girls for that matter) that 'cross is way more fun with multiple gears, real brakes, and knobby tires, and possibly a sweet clinic/ pre-season practice race deal I'm working on cooking up. I know it's a long way off, but file this away in your brain in case you encounter any other situations where Jake can be of use in 2012.
Posted by Lindsay Hall-Stec at 12:45 PM 2 comments:

This weekend was interesting in that it marked the end of the 2011 season and the beginning of 2012, with little space in between. Now I'm enjoying a paid holiday and reflecting on some of the things involved in crossing over to the new year.

The irony of my recent promise to myself that I would not make myself show up at any races that I did not really want to do in 2012 (not really a resolution, but kinda) was that I ended 2011 with one more last race when I'd already declared myself done. The problem was that when I made that declaration, I thought done meant done. Wash the bike, put it away, no more 'cross except for maybe watching Adam at Masters Worlds. However, Adam wanted to race the ICX finale as a tune-up for worlds, and I didn't have the option of staying home. The Rodkey Ford Focus Express was leaving Saturday morning and not returning until Sunday afternoon after the belated Christmas celebration with Adam's family was complete. Staying home from the race was not an option, and I really don't like to be at a race and not participate. Plus, several people seemed concerned about my missing out on my ICX third place t-shirt if I didn't show up. I hoped that my two weeks of not riding or lifting might give me some sort of magic rested legs, but really I was just kind of weak and in shock of the hard effort. Meh, nothing ventured, nothing gained. At least I got my t-shirt and a couple more muddy tongue pictures for the season. 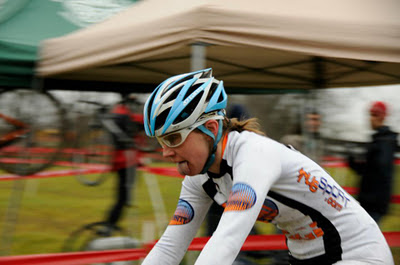 I also ended a relationship on Saturday. Even though I hadn't ridden my Anthem very much the last two seasons, I hadn't been really trying to sell it, just in case I ever had the sudden need for a full-suspension bike. However, the one time I rode it this year was on a day that I thought I might need a full-suspension bike (the Rangeline Rampage), and that ended pretty badly. So without really advertising, I'd found a few potential buyers in the last few weeks, and on Saturday, nine-year-old Will Johnson (if you race around here, you know the badass little kid in the DRT kit) become the proud owner of a new-to-him, slightly too big bike with pink cable housing. I have a feeling he will do it more justice than I ever did.

I used some of the proceeds to buy myself a new helmet, since the old one just concluded its third season. I figured I should wait until the mud-slinging was over so that the new one would get to stay clean for a while. I actually went to Bikesmith's to buy it, rather than just leaving a blank check on the desk at home like I do for most of my cycling purchases, and the salesman (my husband) tried to upsell me with a pair of Giro socks that perfectly matched the helmet, which perfectly matched my new road bike. Too bad my Speedway Wheelmen kit doesn't really match any of it. 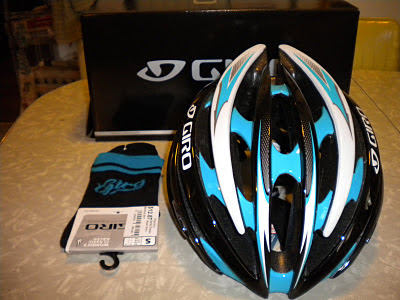 I've also already entered my first race of 2012. I missed the Sub-9 Death March in 2011, because I was still only partially rehabbed from my surgery, but several friends did it and came back with rave reviews. Since it is so close and is Indiana's answer to spring endurance racing, my new Speedway Wheelmen teammate Val and I will be throwing our sparkly new helmets in the ring for the women's team competition. Given I haven't been able to stay on her wheel all 'cross season, but I have ten weeks to train, and maybe I can keep up when she's not actually *trying* to drop me.

Finally, I'm ending the abuse that I've been heaping on my body the last couple of months and starting the new year off right by starting a Whole 30 eating plan for the month. I had to delay the start by a day due to yesterday's holiday celebrations (stayed grain and dessert free but not 100% paleo), but since January is 31 days long, it will work out perfectly with the end of the month. I've been hesitant to try this in the past, because I'm really attached to butter, but since clarified butter is now allowed, I think I will make it through using home-clarified butter from The Swiss Connection in situations that really, really require butter. Also, since my horribly broken out skin the last month or so is an indication that my Gut-Brain-Skin axis is kind of pissed off at me, I'm also going to be avoiding nightshades and eggs and going heavy on the sauerkraut, bone broth, and cod liver oil. Hopefully, by the end of January I can look and feel as awesome as I did at the beginning of the season when I my diet was a lot cleaner.
Posted by Lindsay Hall-Stec at 4:23 PM No comments: