When I was writing my post last week summarizing all of the stuff than Frank and I had been up to since the end of ‘cross, I wasn’t sure whether to include the tidbit about my breast surgery or not. It seemed like a very minor thing that, in the context of my continued telling of the story of my bike adventures, wouldn't have a major effect on the plot. I still gave it a paragraph, because, despite not making any major impact on my training, especially during the off-season, it felt like it was still part of the larger story and needed to be included.

The funny thing was that I didn’t tell very many people about it unless they read the blog post. Basically, it was just my mom, my boss, the Laser Cat group chat, and my manicurist, who was mostly included to explain the giant bruise my hand that had resulted from a failed IV insertion when I went to get my nails done the day after surgery. It’s interesting because this time of year my Facebook memories are full of six-year-old updates on my pancreas drama posted for any “friend” who wanted to read them. I guess I’ve become less public in my sharing since then, but let’s face it, even minor breast surgery is a lot more “triggering” to people than major pancreas surgery, so I was not in a big hurry to draw attention to it. As I explained to my manicurist while laughing about her inclusion in the small group of people that I had told, “If you tell people, they’re like, ‘Oh my God, you have cancer’, and I totally don’t have cancer.”

Well, it turns out that I totally had cancer. Well, maybe I had cancer? Pre-cancer? Stage 0 cancer? My boob had a small number of cancer cells performing short time trials to see who would wear the leader’s jersey in the first real stage of the Tour de Cancer? (Worst charity ride name ever.)

Whatever you want to call it, a week after the surgery, the doctor called me to say that they had found DCIS in my pathology report. That stands for Ductal Carcinoma In Situ, so the “C” is, in fact, “The Big C” that we all fear. Luckily, the “IS” stands for a Latin term for “in its original place", meaning that it was just hanging out in my otherwise unused milk ducts not really hurting anything yet. It was already removed with a nice “clear margin” before I even knew it was there.

That hasn’t made the week since finding out any less stressful. DCIS was all I was told on the phone Friday night, with no details about my particular case. I would have to wait until my surgical follow-up on Wednesday for those. That made for a not-very-awesome weekend of worrying while still trying to muster the energy to go ride bikes in the cold. I did a pretty good job of holding myself together until the appointment on Wednesday, only crying a bit on Saturday night, mostly because I was frustrated at having important information withheld from me for several days longer than I thought it should have been. Obviously I spent a lot of time Googling from Saturday-Tuesday.

When Wednesday finally came, the news was better than I had feared. I was very afraid of having to have radiation, partly because it sounded awful and because of what it could potentially do to my TSE plans. The first order of business was the BRCA test, which is a genetic test for hereditary breast cancer risk for which a positive result pretty much means a double mastectomy in the near future. Luckily, positive results are also rare. I should get that test result in the next 1-2 weeks, and given a negative result, the decision will need to be made as to whether I will get radiation or not.

The surgeon handed me an article from Time magazine about over-treatment of minor breast cancers and what some researchers are doing to figure out how to responsibly treat patients with less intervention. He showed me a chart of the Van Nuys Prognostic Index which is one guide that can be used to determine the likelihood of DCIS coming back after surgery with no radiation. I was the best case scenario for all columns, except for my age, and he told me that basically any radiation oncologist would say that I needed radiation based on my age. In this case, younger is “worse”, because the longer you have left to live, the more time the cancer has to come back before you die of something else. Then he told me that the radiation wouldn’t be as bad as I was imagining, and that I would “feel normal for the first four weeks, and then get kind of sunburned and cranky and take it out on (Frank) for the last two weeks”. 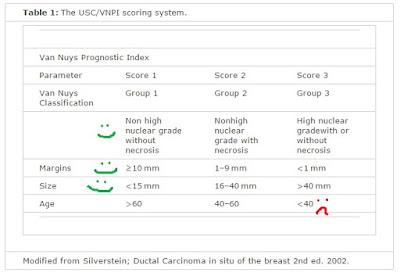 The upshot is that the decision whether or not to have radiation is really up to me. By the current standard of care, I’m “supposed to” get it based on my age. The problem is that radiation will only cut my not-actually-that-high chance of recurrence in half, give or take depending the source of the information, and once it’s done I won’t be able to radiation in that breast again or have much of a chance at successful breast reconstruction if I get a new, worse cancer in the future. And the chance getting a new, worse cancer in the future is relatively small, but still real, whether I get the radiation now or not.

Rather than treating my age and its accompanying long window for recurrence as a reason to take the “kill it with fire” approach now, I’d rather take the approach that with current medical technology, I only have so many cards to play, and I’d rather save them in case I need them worse later. I’d prefer to just keep a close eye on the situation, and hope that treatment options improve before my long window for recurrence is up. Better yet, my real hope is that I side with the majority of women with my size and grade of DCIS who never have a recurrence and thus don’t have to worry about future treatment options. Plus, I’m already going to be tired and cranky enough this winter getting ready for the TSE.

It’s interesting because, as stressful as this week has been, my brush with “The Big C” doesn’t feel as huge as one might imagine. It’s tough making the decision about what I want to do when it goes against what I’m “supposed to” do. Luckily, my in-house rhetorician supports me, and has been helping me practice my talking points for defending my choice as well as practicing them himself on my behalf. I know that I’m going to have be vigilant for the rest of my life about this, but once a little time passes, I think it will feel normal and less stressful, and this little brush might have saved me from something worse in the future.

Posted by Lindsay Hall-Stec at 4:17 PM No comments:

I thought I’d write a short check-in post, because it’s been a while since the last one.

Since our last cyclocross race, Frank and I spent a week in Oklahoma visiting my parents for Thanksgiving. We didn’t ship bikes out this time, and were a little stir crazy by the time the week was over. We tried to get as much physical activity as we could by walking dogs and petting cats. 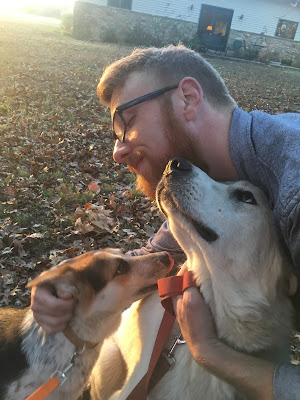 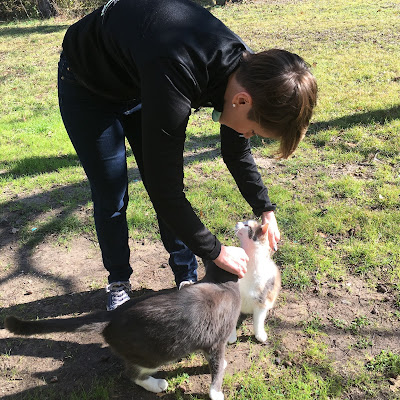 We came back just in time to help out with No Scrubs 2: Electric Boogaloo, Team Laser Cats’ now annual fundraiser alley cat race. Frank hit all of the checkpoints with a little help from local friends while I hung out behind a Walmart and facilitated the feeding of some feral cats. 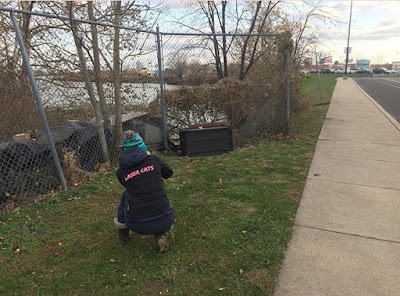 Once we were home and settled back in with our own kitties, we began our off-season weight training program last week and had our first session with a trainer. I haven’t worked with a trainer since 2013 and Frank hasn’t since high school, and I feel like my strength has really fallen by the wayside since I moved to State College and recovering from the day-to-day strain of life on the rocks began to take priority over from serious and consistent gym efforts. My plan for the next 12-13 weeks is to learn some new tricks, establish a fresh routine, and get really strong again for the first time in nearly four years.

It doesn’t look like there will be a New Jersey fat bike series this year, which is just as well for us, since I’d already made the decision to focus on strength training this winter. We have pulled out the fat bikes a couple of times since Sly Fox, even though it’s not really snowed much yet. I really just prefer riding Hellga when it’s below 50 degrees, whether there’s snow or not, because working hard to go slow is actually a good thing when it’s cold, and I can fully commit to looking silly in the name of comfort, Cobrafists and all.


Finally, I completed an important transition season milestone on Friday by getting three papillomas removed from my left breast. While getting things cut out of your body is never really convenient, if you’re a cyclist who isn’t gearing up for cyclocross nationals, December is a good time to do it.

Luckily, it really was as easy breezy the surgeon made it out to be. I got a good excuse to use one of the many surplus sick days that I have stored up at work, and got to take a nice drug-induced nap. I took my doses of hydrocodone the first day as the anesthesiologist recommended, but when I woke up Saturday morning never having passed 3 on the pain scale, I stuck with just ibuprofen from that point on. I was able to go the gym Saturday and do a short, easy fat bike ride at Accuweather on Sunday. I’m pretty much down to just minor discomfort that shouldn’t stop me from any of my planned gym sessions or roller rides this week. I’m pretty glad to have that behind me, and that it’s unlikely that it will turn into cancer or anything worse in the future.

So that’s what I’ve been up to the past few weeks, and the next few look to be more of the same: weights, rollers, and long Sunday fat bike rides. I’d be lying if I said that I wasn’t already getting nervous that I have now officially entered into my TSE build-up period after three years of wondering if I’d ever be able to actually do it, but we have many months left to discuss my inevitable progress and inevitable doubt on the journey to #singletracksummercamp. For now, I’m doing my best to embrace the somewhat boring routine of base-building, as it will make for better exciting stuff later.