Time won't fly, it's like I'm paralyzed by it
I'd like to be my old self again, but I'm still trying to find it
After plaid shirt days and nights when you made me your own
Now you mail back my things and I walk home alone

Week #12 saw the race that almost didn't happen. With rumors of snow, ice, peanut butter mud, and general treacherousness in Michigan, my Speedway Wheelmen teammates vacillated all week about whether we should even go to Barry-Roubaix. Since I had really only signed up for it to complete the "Tour of Pain" quartet, I wasn't really attached to going if no one else was. In the end, though, Sarah seemed determined to go, and couldn't really think of a good excuse not to.

So we made the trip without Janelle, who seems to have officially and permanently broken up with Michigan racing, and is now out of the running for the "Tour of Pain" GC. We had a really good time driving and hanging out at the hotel, as you can see from our "openers" workout below. 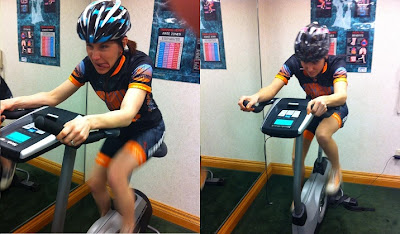 The race itself was pretty meh. The weather was supposed to be 40 and sunny, but the start saw 20-something and overcast, and I don't think it got above 35. So starting with full winter gear, including lobster gloves, kind of killed whatever competitive spirit I had. The race started and I just rode. I couldn't get a good wheel, and I didn't really try that hard to keep one. The course had some ice on it, but overall wasn't too bad. I did manage to slide out once and bruise my hip. In the end, I made the time cutoff that I've been worried about for months, although they moved back 30 minutes for conditions. However, I missed a turn during the last 20 miles and ended up wasting 20-30 minutes riding off course.

The above lyrics entered by head during the time I was trying to find my way back and get to the finish line. Let's just say it was bit of a letdown after the awesomeness that was the Death March. In the end, though, I persevered, because that is what I do. Now that I've already had a high and low in this infant season, I'm hoping to move on and find what the "new normal" is for 2013 Lindsay. I'm a different person than I was in my previous endurance racing life; I'm just not sure what that is yet. So maybe my "old self" is the exact opposite of what I'm trying find. I wouldn't mind my two-weeks-ago self, though.

I think after the Death March I thought I should stop with the weekly check-in posts, because it was racing season and I should have race reports pretty often. You know, the whole weekly report thing was just supposed to be something that got me through the winter until Death March, but winter seems to be clinging on, and I still think I need my Monday motivation. So we're just going to pretend I didn't skip week #11, and I'm going to post these awesome pictures of a 50 mile gravel ride that I did with Dustin and Corinna that weekend. 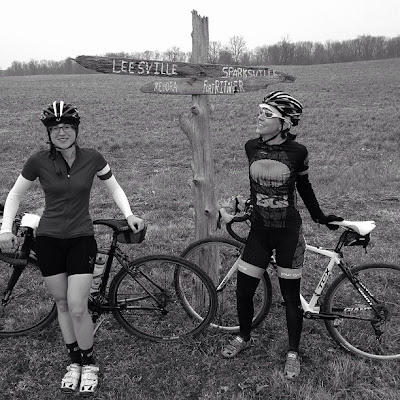 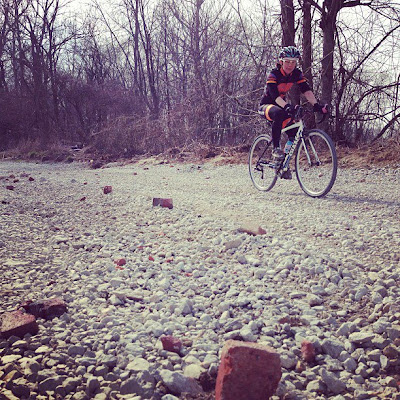 Posted by Lindsay Hall-Stec at 2:47 PM No comments:

Week #10: Then the Death March Happened

I've been spending the last 28 months
Thinkin' all endurance racing ever does
Is break, and burn, and end
But on a Saturday, in cemetery
I watched it begin again

Well, last week I thought it was weird to have my training complete and the Death March only days away. Now that it's over I don't even know what to say. We came. We raced. We got second.

I don't really feel like doing a full play-by-play, so here are the important tidbits, in no particular order.

The Fearless Navigator Made a Mistake

For all of my knowing the route by heart, I always had this fear of just riding through on autopilot and missing a cemetery, and for a minute I thought I did in Elkinsville. Because that checkpoint is a mile or so out-and-back down a gravel road, I never actually went down there in training. I just sort of made a mental note of the road sign. However, when we were chugging along yesterday, I got kind of disoriented, thought we'd missed our turn, and panicked a bit. We backtracked a few minutes and realized that we hadn't missed it at all. I was going to feel really bad if we ended up losing place by the amount of time that we lost backtracking.

Is This Life or Death March?

However, a little later Erik saw a SAG van and wanted to ride back and get snacks. I agreed because, well, this stuff is supposed to be fun and not just race-face suffering the whole time. I also figured I could blame the Pop Tart break in the case of a five-minute defeat. Luckily, neither made any difference in the results, and I'm glad for the laid back approach.

I was also glad to be probably the only female in the top five of the co-ed division to not be physically pushed and pulled around the course all day. We did our best without pushing to the point of misery, and still ended up successful. Misery wouldn't have made us fast enough to get into first place; it just would have made us miserable. I rode really hard and was pretty trashed by the end, but it never stopped being fun (okay, maybe a bit boring on the paved stretch to Story). So I feel extra successful in that we were able to basically just go out and ride and still do well. I'm pretty sure we're even still friends, despite five hours of making up reasons to hate each other by the time it was over.

We spent most of the race knowing that Scott and Janelle were in front of us, but there wasn't really anything we could do about that. There was another co-ed team that arrived at the first checkpoint as we were leaving, but otherwise we didn't really see any others early on. I wasn't really sure of the routes of the other contenders, other than that Will Sherman and Jane Prater would be going the opposite direction. My thought was that if we could get to Story before we met them, we were in good shape. I got worried when we saw them a good 10 minutes before Story, though. As we were going out to pick up Hillenburg near the end, we saw them coming back, which presumably meant they had a 5-10 minute lead. I'll admit to a string of expletives coming out of my mouth at that time, but we sped up as much as we could and grabbed the last two checkpoints before heading for the finish.

When we got there, the lady at the finish said that there were maybe 3-4 co-ed teams ahead of us, but she wasn't really sure. The initial word around parking lot was that we were probably fourth, so as we changed clothes and went to eat I was pretty bummed thinking that we had missed our goal of the top 3. But it's not over until the pictures are checked and the time bonuses added up. While we were eating, we found out that another team that finished before us had taken a picture at the wrong Hillenburg Cemetery (there are two about a quarter-mile apart). That seemed to put us in the top 3, and so began the waiting game. Luckily, we had beer and fudge to keep us entertained.

After three or so hours, Scott finally came out and held up three fingers at us, which was heartening in that we had at least not waited around for prizes that would never happen.  However, while were were standing around waiting for the awards to start, Will came up and said we got second, because they finished nine minutes ahead of us, but we got one more checkpoint than them, and thus a ten-minute time bonus. Backtracks and Pop Tarts be damned, we came out on top! So to be honest, I still don't really understand how this all played out and probably won't until I see the published results, but we were happy and took our Hopslam and ran.

So that was the 2013 Death March and the official beginning to my season. Looking forward to Barry-Roubaix in a couple of weeks, although I worry that it won't be nearly so entertaining.
Posted by Lindsay Hall-Stec at 5:54 PM 1 comment:

So here it is. What seemed like an incredibly long stretch of winter prep at the beginning of January is now in it's final days. After nine weekly check-in posts and countless play-throughs of Taylor Swift's "Red" album (at least a couple of which were not in my car nor initiated by me so I feel validated), we have reached Death March week. It's funny how this feels like the end when it is actually the beginning. I'll soon be able to produce race reports at least every 2-3 weeks from now until December. I've just been so focused on making it to this checkpoint in my season, that it feels weird almost being there.

For the first time since 2010 I get to say it: the hay is in the barn. I know this to be true, although I'm not feeling very confident at the moment. I spent most of the last week with a lingering headache, sore throat, and general sense of malaise that kept my training pretty light and resulted in my spending most of Thursday at home in my pajamas trying to force my immune system to do its job. I was able to get out for one last recon ride with Erik yesterday, but I don't feel like I rode well at all, and the sore throat and headache are still around this morning. At this point, all I can do is treat my body as well as possible and hope it does the same for me on Saturday. 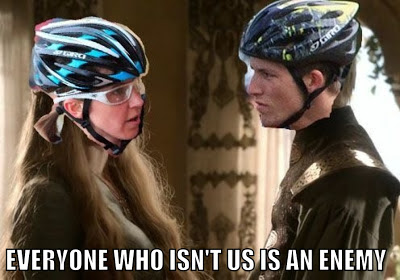 The illness and return of cold weather made for another picture-less week, so I guess I'll just show you how I entertained myself while trying to rest and get well on Thursday. Overall, it was kind of a failure, as I didn't get well, and "Speedway Wheelmen as Game of Thrones Characters" did not come off as hilarious as I'd originally hoped. I pulled a punch with this one, choosing to make myself and my partner the two worst characters on the show, when it would have been funnier to use our teammates/rivals/best fremenies for the weekend, Scott and Janelle, instead. I've already meme'd Scott once this season, though, so it seemed unfair. I guess we can all be friends again in a week, right?

Also, I'm apparently now cultivating a dynasty of OVCX Cat 4 men's champions, so perhaps choice of myself as Cersei Lannister is appropriate after all?
Posted by Lindsay Hall-Stec at 10:11 AM 1 comment: