"... like a f***ing roller coaster for hillbillies." - Tomasz Golas

"Cycling is a bitchy sport at times..." - Jamie Scott

I almost feel like I don't need to write a whole post on this; my husband's tweet above says it all. The other two are just kind of funny/fitting.

Yesterday I wrapped up the disappointing last half of my XC mountain bike season. When I look back I realize that it was mostly disappointing because I won the first race of the season, and then it went downhill from there. Without that initial success, I could have just gone through the season with the excuse that I was just coming back from surgery and was focusing on cyclocross. As it turned out, I tossed those excuses to the wind, tried to reach beyond the comfort of mediocrity, and failed.

"Held up so high on such a breakable thread" - Avril Lavigne

It's hard to decide how I should feel about this. I knew that first win wasn't against particularly strong competition. However, as the season progressed more girls started racing or moved up from Cat 3, and winning wasn't so easy. I was the slowest women's Cat 2 winner in the history of the BCSP race and the fastest last place in the history of Logansport. My eight place time from yesterday was faster than the second place time at the same race when I first raced Sport/Cat 2 back in 2007. (I know the course has been altered, but the men's times are about the same so it's not just a faster course.) So it's not like I actually did super bad the last the last few races, but at the same time it's frustrating, after six seasons of racing, to be competing against girls who have been at it less than two years and not be winning.

"The competition's getting younger. Tougher broncs, you know I can't recall." - Garth Brooks

In reality, I was faster overall this season than I ever have been, but only by a small amount. In light of the fact that I did have major surgery over the winter and trained fewer hours, I guess even a small improvement should be a happy surprise. I feel like I'm actually a lot faster for the first 30 minutes or so of the race, but I'm just not able to maintain it. I'm kind of hoping that the improvement to my top end will be more pronounced in 'cross races where 30 minutes is all I'll need.

So for better or worse, another mountain bike season is in the books. I have a nice mental list of things to do differently next year, but for now, all I can do is move on and try to have the best 'cross season I can with the fitness I have.

I never could bring myself to write a race report from the Versailles race, because I'm still upset about it. I got into a verbal spat with another competitor, and I feel like an ass for it. Not a completely unjustified ass, but an ass nonetheless. I've been struggling with how my perception of things may or may not actually line up with reality (still not sure). I've finally come to the conclusion that regardless of how the other girl's past actions have contributed to my frustration and possibly the frustrations of other riders, as well, it was ultimately my responsibility to not let myself get so upset worrying about other people's actions. It's just a damn hard thing to do.

Also, I ran out of gas mid-race and finished fourth, which I felt was pretty dumpster. I'm sure the wasted expenditure of emotional energy didn't help.

I'd still been feeling "off" since I got back from Oklahoma four weeks ago (smacked head?), so I took Friday off from work to allow a nice three-day weekend and the chance to regroup a bit. I'm not sure what the deal was. I wasn't sleeping well, and was showing physical signs of stress, although I couldn't really name any particular thing I was worried about. Regardless, I thought an extra day of sleeping in, followed by a morning of light and not mentally taxing physical activity, would do me good. So I swapped my Thursday intervals for a Friday mountain bike ride at Brown County. A couple of hours at chill-axed pace did me good. 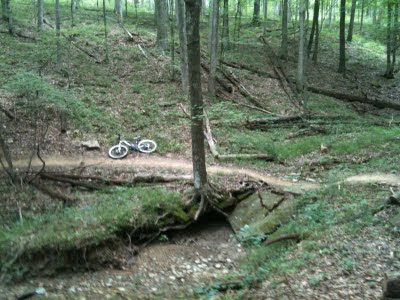 Later that day, I found out that my new cyclocross wheels had arrived. They are Velocity Major Tom rims with Ultegra hubs. I apparently also have "custom" tires, although I have only seen them on Twitter. The new wheels are not super fancy, but I'm looking forward to making the jump from clinchers to tubulars. Hopefully, the "unparalleled ground control" will help me step up my game this season. 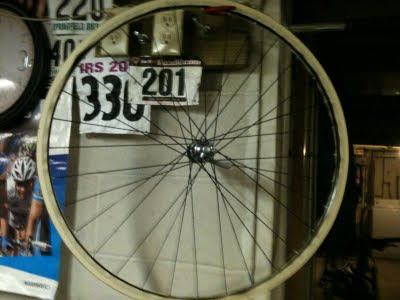 Should have taken the picture before Adam started the gluing magic.

In other 'cross news, the registration pages for some of this season's races have begun to open and it appears that the campaign to get a Cat 3 women's class for the OVCX series was mostly successful. I say mostly because, while there will be a separate Cat 3 women's class for registration and scoring, they will race at the same time and for the same prize purse as the Cat 1/2's, as well as the newly formed Elite 35+ women's class. I feel like these category changes will help create a more defined path for riders progressing through the sport, and will give everyone a place where they belong, even if we don't all get separate swag.

After obsessing over the creation of a Cat 3 women's class for the last year, I certainly would like to participate in it. However, I'm a little scared of getting in over my head for the first race. So I'm strongly leaning toward racing Cat 4 for the first race and trying to earn my upgrade. Upgrading is easier than downgrading; plus I'm a strong advocate of "the upgrade points system is in place for a reason" and feel like I should earn my spot in the next category up.