We thought a break would be good
For four months we sat and vacillated
We thought a small time apart would clear up the doubts that were abounding
At that particular time love encouraged me to wait
At that particular moment it helped me to be patient
That particular month we needed time to marinate in what "us" meant
Okay, so the title is a little bit of an exaggeration. I can fully breath in and out without pain, as long as I do it slowly. Coughing and sneezing still feel like being stabbed, though, so I tend to minimize that action. The fact of the matter is that I have reached the point where I feel very little pain during normal "get up and walk around, cook some food, take a shower" activities, so I'm getting a little restless.
Restless, as in I'm not physically tired enough to quickly fall asleep at night, despite the fact that I really need to do so that I can produce some sweet human growth hormone for mah belly. During those times my mind goes strange places, like trying to remember the lyrics to old Alanis Morrisette songs, which results in consulting the ol' Ipod and rediscovering old Alanis Morrisette songs that I had forgotten altogether. That resulted in getting a little irrationally weepy for a bit (it happens sometimes these days) and a good opening for today's post.
During the last week I have officially hit the "waiting" stage. Aside from the sleep thing, I feel generally decent, but the little tests that I conduct on my abdominal muscles tell me that they are still a few weeks out from being able to do anything besides holding me upright while I walk a slow, careful lap around Bryan Park. Still hurts to sneeze, still hurts to touch the incision area, still can't really stretch and bend very well.
Since I can't do much physically, I've been making plans to do stuff physically. That doesn't sound like typical Lindsay behavior at all, right? Extrapolating potential outcomes and laying out plans to try and control the situation? (At least I'm not trying to control The Situation. What a mess that would be.)
The plan is, when the abs are ready, to spend 12-16 weeks devoting myself to "general fitness", rather jumping on the bike and being all "OMG, I GOTTA GET MY THRESHOLD POWER BACK NOW!!!" This is going to sound trite, and I hate trite, but I feel like this whole surgery mess is really an opportunity for a fresh start for me. When I think about the "four months we sat and vacillated" in the lyrics above, I think about July-October of last year, rather than my recovery period. I sure as heck did some vacillatin' during those months, and the doubts were abounding. I changed my diet, lost some weight, and got happier, but I had to pull away from a full devotion to cycling to do it. When I found out that I was going to have to take a major break, I saw it as a opportunity to fully let go of cycling for a bit and make all of the changes that I wanted to make, rather than feeling pressure to hurry and come back.
Losing weight was the one of the changes I'd hope for, and I've more than exceed that goal according to the scale. However, due to the circumstances, I'm still not as lean as I would like, but that is where the other change comes in. For quite some time, I've been bothered by the fact that, aside from the ability to ride a bike for a really long time, I'm pretty freaking weak. I can't really do more than one or two real push ups, and even then my form is pretty bad. I've been Crossfit-curious for a long time, ever since my former coach had me do Olympic lifts and linked videos to their site. It's not really the kind of thing one can just throw on top of an intense cycling training program and keep their sanity, though.
So I've decided to take a few months and satisfy my curiosity. I've shopped around and found a local facility (sorry, I will neither say "box" or ever refer to my food as "blocks") that will teach me the basics, but won't force me to stick to a rigid group workout only format. Once I learn what I'm doing more, I can focus on the elements that best help my cycling strength, as well as my general conditioning. No random going 'till I puke without a plan involved (the major criticism of Crossfit). The plan is Crossfit Sunday, Tuesday, Thursday, base miles on the bike on Wednesday and Saturday, and keep my usual off days of Monday and Friday. That should give me a good foundation for late May or June when I feel ready to back to full bike training with a little bit of maintenance strength training so I don't lose what I've gained. In preparation for this plan, I bought some new running shoes to replace the 5+ year old super-padded, ultra stability Asics that are a relic of my triathlon days. You might guess that I picked them for the color (which I love), but they also come highly recommended in the crazy Paleo ultra trail runner community, or at least among those who favor regular shoes over Vibram Five Fingers. I figured since I'm out of practice on running anyway, if start back with my Bryan Park walks in minimalist shoes that my feet will slowly grow stronger along with the rest of my body. 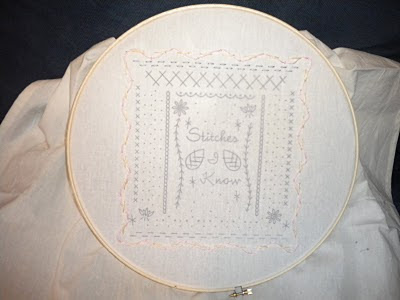 Finally, for the sake of another picture, my other project while I'm "waiting" is learning embroidery. I kind of procrastinated on this one, as I didn't lay down my first stitches until Friday, two and a half weeks after getting out of the hospital. Now it's underway, and easier than I thought so far. Of course, as you can see from my "Stitches I Know" sampler, I know only know about two stitches so far, but hopefully I can buckle down and finish the thing before I have to go back to work.
Posted by Lindsay Hall-Stec at 4:52 PM No comments:

Free and On The Mend

The long-awaited surgery is finally behind me and I am on the mend. They ended up just taking out half of pancreas, because once they got in there, they discovered there wasn't enough tail left to do the funky double pancreas thing they planned. No big deal, I still have enough left to live a normal life once I'm all healed up, which may take a while. 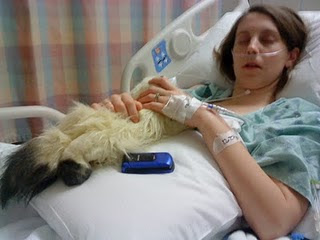 A lovely shot Adam took the day after surgery. He got me a stuffed cat to keep me company since I had to be away from the real ones.
The first couple of days after surgery weren't too bad, because I was on so much morphine that I didn't feel a lot of pain. I made a lot of early progress and was cleared for "full liquids" (blended soup, pudding, ice cream, etc.) two days earlier than planned. However, a sudden onset of nausea and a drop in my white blood cell count set me back enough that I had to stay in the hospital until the morning of Day 6, as predicted by my well-read "surgery book" that they gave me before hand.
I felt pretty awful when I arrived home, but I have made small bits of progress every day since. I haven't made it through a night in bed, as I get really bad internal pain in the pancreas area when I lay too flat for too long. For some reason, I can sleep on the couch much better, so I usually end up there from 2 a.m. until Adam wakes up. Then I usually toddle into the kitchen for some food, and then go back to the couch and sit there upright while I have my breakfast. I don't spend a lot of time away from the couch yet.
Eating has been my other struggle since I've been home, since all but the tiniest portions make me feel sick and bloated after eating. I had this great plan to bring my own food and maintain a strict paleo/primal diet in the hospital, or at least avoid gluten no matter how bad things got. Unfortunately, there was even less in the way of refrigerator/microwave access for my caregivers than I had expected, and with the arrival of my nausea, those plans were thrown out the window.
When Friday rolled around, I knew I they wouldn't let me out if I didn't start eating, even though I felt really nauseous. The doctor finally just said to eat whatever looked good to me, which turned out to be some homemade Chex mix that my grandma had sent with my mom. So I pretty much lived on Chex mix and boiled or scrambled eggs from the cafeteria until I got out on Sunday. I know it sounds weird, but those were the only things that didn't make me sick. After that, my barriers were down, and I had no problem eating the homemade chicken noodle soup that my mom made when we got to my house (with saltine crackers even), and finishing off the Chex mix. I finally finished the soup off yesterday, and woke up today with a little bit more appetite for meat, so now it's time to raid the freezer and get back on the straight and narrow.
So now for the "scandalous" pictures. I know, this is even more risqué than the time that I posed in my sports bra and bibs. Yes, I am in my underwear, but it covers more than most bikinis, and I wanted to show my scars, as well as the weight I've lost.
I've secretly always wanted to get down to an even 50 kgs, to not only be "mountain goat waif-ish", but to make calculating my watts per kilograms easier. As of this morning, I'm more or less there, but I'm much more skinny-fat than I'd planned to be that weight, and my threshold power would definitely suck right now if I had one. (I'm guessing the inability to ride a bike equals a threshold power of zero.) 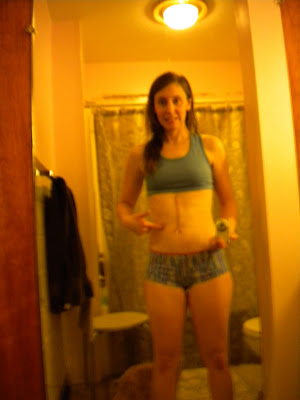 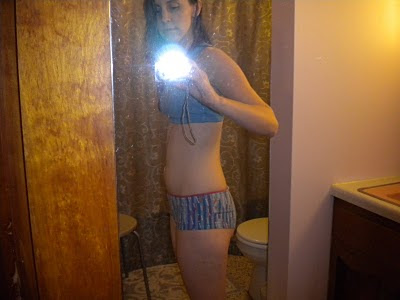 My belly is still pretty swollen, not to mention the lack of usable abdominal muscles. I'm going to have some serious postural issues to work out when this over. My back is killing me about as much as my incision is. 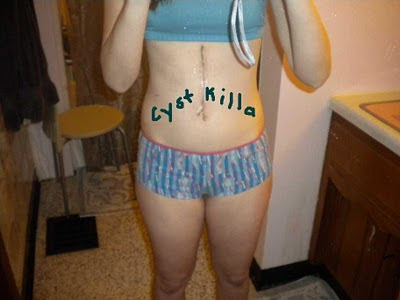 Thinking of getting a gansta tattoo to cover up the scar. What do you think?
Posted by Lindsay Hall-Stec at 3:03 PM 3 comments: