We could call it even

Rock a number plate for the weekend

'Tis the damn season, write this down

I spent a year inside my house

We could just ride around

Frank and I have joked many times over the past year that 2020 was 14 years long. I think that further proof of this is that Taylor Swift released about eight years' worth of albums in a year and a half. It's a lot to absorb, especially since I haven't had much commuting time to listen to music in the past year. I've recently begun to grow fond of her latest work, despite the lack of direct relatability of many of the songs to my life. For example, I've never taken personal responsibility for avenging a Haim sister's murder, while all the other sisters do is provide me with an alibi.  Twenty-something me also never had the foresight to retain a hometown booty call for the holidays (probably because she also didn't have the foresight not to get married at 24), but there is something about "Tis the Damn Season" that's so...aspirational? 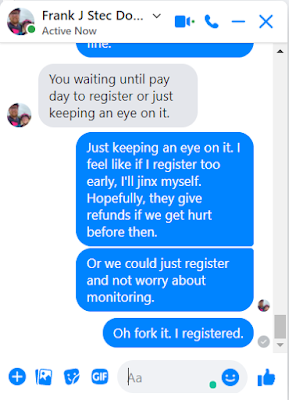 Another sign of the past year's relative length is that I've done 23 years' worth of bike races in the past two and half years. By that, I mean I've done the same number of bike races that I did in my life up to my first triathlon in 2004. After that, I made it 15 consecutive summers, where I paid money to be timed while riding a bike in one capacity or another. Then it all unexpectedly fell apart. My bilateral mastectomy in 2019 was quickly followed by Frank's broken collarbone as soon as I was strong enough to think about racing again. 2020 brought a canceled first half of the season, followed by my fractured vertebrae and subsequent spinal fusion. It's been...a lot.

When the Downhill Southeast series schedule was announced a couple of months ago, I set the opening race at Massanutten on May 2 as the end of my 2.5-year racing hiatus. I admittedly spent a lot of 2017 and 2018 poo-pooing the idea of downhill racing. Why would I want to drive 2.5 hours and sleep somewhere besides my own bed just to race for about five minutes? That makes the Philly-centric cyclocross racing that burnt me out after two years in Pennsylvania seem positively convenient.

I recapped this all for Frank as I reconciled it with my excitement for the Massanutten race. "I used to think five minutes of racing wasn't worth all the bullshit around it," I said. "However," I concluded, "It's been so long that I miss the bullshit of racing."

It's true. I just want to go to new places and see people and attach some meaning to bikes again. I'm so out of shape that five minutes of "racing" is about all my body can handle right now, so I appreciate the convenience of being able to just jump in rather than waiting even longer to be in shape. I also never blogged about it, but we were driving to Missouri to buy our sweet VanDoIt van the day the world shut down in March 2020, so I actually like having excuses to sleep away from home these days.

This afternoon, I saw the number of spots available at Massanutten had dropped from 160 to 135 in a couple of days, so the race is likely to sell out. It felt a bit scary to put down an entry fee five weeks out, but ultimately, I knew it was what I needed to do—Tis' the damn season, after all.

Posted by Lindsay Hall-Stec at 6:09 PM No comments: