"In keeping with their credo of ‘Die biting the throat,’ a gnoll in haouka will take progressively greater risks, performing more and more daring feats of reckless bravery until she is killed." 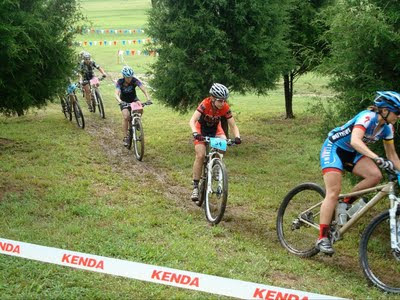 Going out with the leaders. Thanks to Janelle Renschler for the photo.
Well, I failed to garner another win at DINO French Lick. I know that's kind of a bummer way to put it, but after my first win at Brown County, I was hungry for another, and it seemed very possible.

The race morning was strange, since early morning thunderstorms left us wondering if the race was on or off. Unable to get through to the DINO hotline, we set out and kept calling along the way. When Adam finally got through about two hours before the start time and over halfway there, there was no message either way. We assumed it was on.

The parking lot was so scarcely populated when we arrived that for a while I wondered how much competition there would actually be. However, there were some women from Missouri parked next to us and one of them was in my category. I knew nothing about her, so I just decided I would do my best to beat her to the singletrack and let the chips fall where they may.

By the time the race started, there were five Cat 1 girls and five Cat 2, including the girl who got second at Brown County. In this case, I knew I had to beat her to the top of the first hill so that I could gap her in on the downhill. Otherwise, I would end up engaged in a painful and frustrating back-and-forth like many times last season, which usually did not end well for me. Basing my strategy off of a fast start followed by a long max-effort climb is not the way I'd prefer to do things, but it was what I had to do in that situation.

So at the start I dove into my reckless feat of bravery. I shot out across the flooded driving range right behind the top three Cat 1 girls, and hoped that no one was too close behind me. Hitting the singletrack climb was painful, but I did my best to keep my composure, spin, and try to be as smooth as possible. Unfortunately, as I struggled to find my maximum sustainable pace going up the hill, the clicks of gears and chains behind me indicated that the pace was not fast enough to lose the competition. Early on I was passed by a Cat 1 girl with the Cat 2 girl from Missouri closely on her wheel. So I now I knew something about her: she was pretty darn fast.

At least the clicking behind me had subsided and I thought I could hold on for second. At the next switchback, it even looked like I had a decent gap. But the climb was just too long, and I was unable to hold off the next girl until the top. By the time she passed me, I was in full explosive state and I finally had to back off a bit. So I ended up being clear for the downhill after all, but not in the way I wanted. I limped my way through the rest of the lap for third. I think I would normally be happy with that, but I was mostly disappointed to have been outmatched by someone I know I can beat.

Now I have time to lick my wounds and come back fighting at Versailles. The last two weeks were kind of hard for me, because it took me a full week to feel normal after my effort at Brown County. Normally I struggle with a "phantom pedaling" sensation in my legs when I try to go to sleep the night after a race. After Brown County, I had that sensation for three nights. By the time I felt normal again, I didn't want to push myself too hard in training so that I would be fresh for French Lick. Not that I think two weeks of suboptimal training had much influence on my race result, but my plans have actually shifted to a 100% cyclocross focus for fall so I'm really supposed to just be training through all of the cross country races. I want to get back on track with that plan as soon as possible. Luckily, I get a rest week, a full training block, and another rest week before Versailles, so that should be perfect.
Posted by Lindsay Hall-Stec at 10:32 AM 1 comment:

A few weeks ago I was listening to a podcast where J. Stanton, the author of The Gnoll Credo, was being interviewed. The book sounded interesting from the interview, so I decided to go to the website and read the first chapter. The first chapter ends with the actual Gnoll Credo, which is pretty much rules of living for the gnolls, which are hyena/human hybrids. The final rule is "Die biting the throat."
When I bought the book from publisher's "Save the Serengeti" page, I received a signed copy with a nice note from the author and quite a few stickers, including four that said, "Die Biting the Throat". I decided that one of them needed to go on the top tube of my mountain bike.
Fast forward to this weekend. I still hadn't actually put the sticker on my bike, but a training cycle of many puke-tastic sets of 30 second sprints had seriously enhanced my ability to push myself, even if my power numbers still weren't as awesome as I'd hoped. I wasn't sure how I felt about my first race at DINO BCSP, because I didn't really know what kind of shape I was in. However, I decided to go into the race with as little expectation about performance as possible, but at the same time to adopt "Die Biting the Throat" as my own credo. Basically, if I wasn't fit enough to do well, that was okay, but whatever happened, I was going to go down swinging.
So we lined up and I scanned the field. There weren't that many Cat 2's and only one I recognized. I knew I had to do my best to be the first in my class to reach the top of the paved climb, since I hate being held up on the downhill singletrack. We took off and I was easily clear of all the Cat 2 girls and the Cat 1's weren't pulling away at the speed they normally do. One Cat 2 girl came around me for a bit where the climb flattens out a little, but when the pitch increased I shoved myself into the hurt box and re-passed her along with two Cat 1 women. I had made it through the first major obstacle of the race, and now I just had to keep it together and hold my lead.
One Cat 1 girl came around once we started climbing, and Emily, who was in Cat 1, passed me about halfway through the North Tower loop. However, she didn't pull away quickly, so I had a carrot to chase up until the Aynes climb. I glanced back early on and saw a girl from my category and panicked a bit, but I just rode as hard as I could and miraculously crested the climb without being caught. At that point I knew that I had a pretty good shot at hanging on for the win, but I still had to be conscientious. I did my best to rip the descent, push as hard as I could on the little ups and downs, and made it to the North Tower climb. Just five more minutes hard, and a screaming descent, and I had it. When I topped that climb, I knew I'd win, and a mile of downhill later, I did.
So I'd call my first race back from surgery a huge success. I think part of it is that I'm not taking myself so damn seriously this year, but at the same time I'm learning to be tougher when it counts. I also think I got lucky with the field today, but hey, a win's a win. I'm definitely hoping to repeat at French Lick in a couple of weeks, since that is my favorite course.
In case I forget sometime between now and June 18, I installed this when I got home from the race: 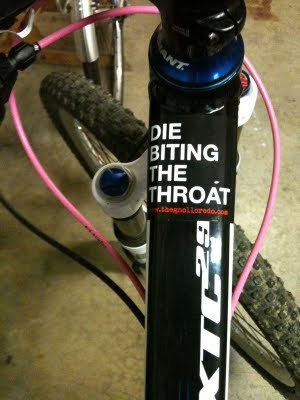