April Is The New January

I've been meaning to write this post since the DINO Spring Tune-up was cancelled, essentially pushing my first race of the year all the way to DINO BCSP on June 5. Actually, I'd decided not to race a couple of days before the cancellation, due to the fact that Adam wanted the car to go to a road race day, I'd forgotten to renew my USAC license and hadn't accounted for an extra $60 in my April budget, and frankly, I just didn't feel ready to race yet.

I planned my season knowing that I would be behind for the spring and summer, and that I would be okay with that, but this April has felt much more like January than April. Many factors are contributing to this: the fact that I just completed my first base training cycle, the fact that I'm still five weeks away from my first "race" and even that doesn't feel real, and the fact that I've not been on my mountain bike the entire month. I was lucky enough to get one ride at French Lick in February and one at BCSP in March, but between the weather and trying to get reacquainted with intervals, mountain bike riding fell by the wayside in the last month. I'm actually feeling a little paranoid about my lack of trail time, but I have 17 weeks left to prep for The Unnamed Epic. Perhaps I'll take more advantage of the drier months of July and August this year, rather than being burned out by then like I normally am. 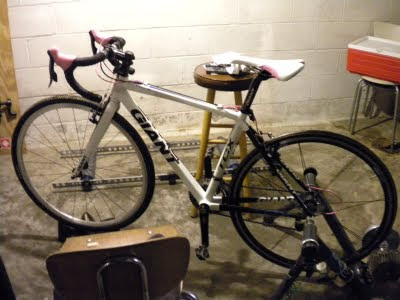 Yes, I've actually been on the trainer a couple of times. Of course, I usually won't get on that thing even in January, but I'm trying an experiment. I've been wavering back and forth about trying intermittent fasting (IF) for a couple of months, but I finally took the leap a couple of weeks ago. I've done quite well at making it until lunch time on just a couple of tablespoons of coconut oil around 8:30 or 9. Since I no longer need to take the time to prepare and eat breakfast, I have an additional half-hour or so more free time in the morning than I used to. Three days a week, I use it to get extra sleep. However, on Tuesday and Thursday I'm playing on the "fasted endurance in the morning, strength in the afternoon" paradigm from the Strength Training for Cyclists blog series that I mentioned in my last post. I basically get up and pedal easy for 30 minutes before I get ready for work, so that I get an extra boost to the efficiency of my fat metabolism. Hopefully, a few months of this result in a killer diesel engine to power through 75 miles of Wisconsin hills in August.

I'm actually finding the trainer more tolerable than I have in the past, probably due to the more relaxed effort. I really do just spin and check my email on my phone while old episodes of Full House play in the background. Ironically, the first morning of this routine involved an episode where DJ decides to starve herself to look good a pool party and is inundated with sorts of CW advice from the family. And Michelle crawls up on a table and shoves a bunch of cake in her face. I can only hope it was the Olsen twin that later developed an eating disorder playing that scene.

Anyway, things seem to be going pretty well, despite the feeling of being behind. The coming training cycle will be hard and fast, and hopefully the weather will start allowing me to do some Sunday rides on my mountain bike.

Posted by Lindsay Hall-Stec at 12:32 PM No comments: