The blessing and curse of not racing for a while is that I don’t feel the obligation to do a weekly blog post. Since my last post, things have been stressful at work and not exciting riding-wise, so I haven’t been very motivated to post.

I actually did “race” since my last post, but my performance as a part of a three-woman Laser Cat team at “THE International Intergalactic Global Open Mountain Bike Team Relay Championship of the Multi-Friggin-Verse” did not warrant much commentary. Basically, while my teammates commented in slight disbelief about the people do the four hour race solo, I was mildly jealous of those racers, because that’s exactly what my body’s capable of lately. A series of four 20-minute bursts over the course of four hours while standing around getting cold in-between? Yeah, my body pretty much hated me for even trying that. Thankfully, we weren’t taking it too seriously, so it was still a good opportunity to spend time with teamies that I’ve barely seen all winter. 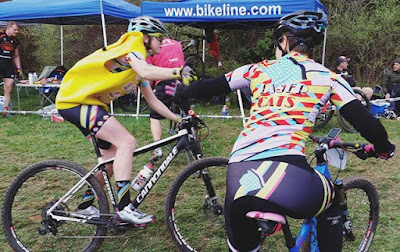 Otherwise, I’ve been a bit aimless in my training since the last post, as the previously-mentioned work stress and sudden return of winter weather have really taken the wind out of my sails. I guess the upside of this is that I’ve finally gotten enough hard-won fitness that even when things get really bad, I’m still not letting myself get as far off the rails as I used to. When our planned Wednesday night mountain bike ride turned into a quick cry at the beer tap on Tussey Ridge, then descending back towards home instead of the more challenging stuff that lay on the far side of the ridge, I did admit that it was time to give myself a break. I took three days off from training and consumed too much beer, pizza, and Mexican food, but when Sunday came, I knew that it was time to get back on track. As much as I dreaded riding 4+ hours in upper 30’s temperatures in April, I put the bar mitts back on Hellga and set out for 35 miles and 4500 feet of climbing, and it still felt less horrible than when I did the same ride back in September. Even though I’m not where I want to be, at least now I can find some motivation in how far I’ve come.

Finally, the biggest thing going on at the moment is that our big, fat, non-dumpster wedding is less than three weeks away. Honestly, I’m feeling a lot similar to how I probably felt 18 days before the D&L Fat Epic. Yes, wedding planning is a lot like an 80 mile fat bike race for me. I want to do it to say that I did, but it’s a huge challenge that doesn’t come naturally to me. As the days tick away, there’s the balance of knowing that within the constraints of our budget and my lack of talent and interest in making aesthetic choices, we will definitely not be featured on The Knot, but hopefully everyone will have a good time. It may also start to feel like an 80 mile fat bike race in the final days as my anxiety-prone self will suddenly be in charge of coordinating all sorts of people, places, and things while also trying to look cute. I’m a little scared, but I’ll get through it. Perhaps I just need to pack a Troeg’s Java Head brownie and plan to sit down and eat it an hour from the end.

With those updates committed to Internet paper, I guess I’ll let myself off the hook for any more blogging for a while and let you know how it turns out. See you in three weeks!
Posted by Lindsay Hall-Stec at 3:58 PM No comments: