I Wanna Be Sedated

One, two, three more hours to go, I wanna be sedated
Nothin' to do no where to go-o-oh, I wanna be sedated
Just get me to the OR, give me something for the pain
Hurry hurry hurry before I go insane
I can't control my fingers I can't control my brain
Oh no no no no no
Not much to report in my world. The biopsy went okay, although it was nearly three hours late getting started. (Thus the lyrics above, which were going through my head all morning.) Unfortunately, it will still probably be another week or week and a half before the full lab results come in and we can proceed. I think surgery is still going to be the conclusion, but things are getting fuzzy about what kind of tumor I have, etc. Hopefully, the lab analysis will reveal something helpful, since I feel like there's more going on that just have something pressing on my internal organs. After nearly five weeks of rest or very light riding, as well as a super clean diet that is claimed to reduce systematic inflammation, my muscles and joints are still stiff and achy and I'm still pretty weak. I'd hoped that getting the cyst taken out would allow some sort of full-body healing to take place, but the doctor sort of looked at me like I was crazy when I asked if the cyst could be causing more systematic problems. So now I'm worried that I will go through surgery and then not really feel any better once it's over.
Additionally, I'm starting to be afraid that by the time the lab work is all finished, that all of the super special cyst surgeons at the IU Medical Center will be booked up until after their four week long holiday vacations to the Caribbean. (Okay, that's mostly making an assumption based on what the orthodontist that my mom works for does.) It's also looking like it might turn into full abdominal surgery, which I think would keep me from even riding outside again until sometime in April.
Needless to say, I'm getting very frustrated and worried. I keep hoping for the best case scenario at each stage of the process, but it then it turns into something worse. I'm crossing my fingers that my luck will change soon.
Posted by Lindsay Hall-Stec at 1:01 PM 2 comments:

The pancreatic situation has been moving pretty slowly since my last post. I have to have a biopsy on Wednesday, and then hopefully we will finally get the surgery on the books. The good news is that after two weeks of complete inactivity post-Berryman epic, I actually started feeling better on my own and I've started doing a little bit of easy riding and some simple bodyweight strength training at home. I'm not really training because a) I don't want to push myself too hard to and start to get weak and sick again b) I know I'm going to have to take more time off after the surgery, so even if I'm feeling better, trying to mount a comeback is impractical until after the surgery. I'm basically just trying to maintain my strength and muscle tone until I'm fully healed and ready to start my 2011 base training.
That being said, something was niggling at me to race one more cross race if I was able. I remember feeling bad for New New as Adam was loading his 'cross bikes up for the USGP Louisville and I was loading up my 29er for the Berryman Epic while she sat in the back room of the basement, all dressed up with nowhere to go for the weekend. So I felt like she needed one last run before winter.
This weekend provided the perfect opportunity with Backyard Cross, presented by Adam's team, the Speedway Wheelmen. The race was at Adam's teammate's property, which was intended to be a housing addition, but currently only contains one house. So making the best of a bad economic situation, the place has been turned into a very large cyclocross course until the housing market picks back up. I wanted to participate in this race, which is part of the Indiana Cyclocross Cup, the younger less-attended sibling of the OVCX series, which the Speedway Wheelmen are trying to get going. With no other Cat 3/4 women entered, I was able to boost their attendance numbers a bit, and get a "win" without blowing myself up. Of course, once the gun went off, I had a hard time "riding easy", but I would make myself back off when I felt like I was going super hard, and I didn't allow myself to try to pass the one junior who passed me. So I got my last race in and don't feel like I pushed myself hard enough to do any damage, plus I got a sweet bag o' swag for my "win". 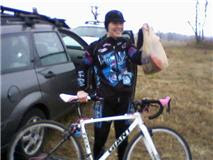 Don't Call It a Comeback

"Don't call it a comeback; I've been here for years" - the cyst on my pancreas
The reason that I haven't posted any news since the Berryman Epic is that I've spent most of the time waiting on news myself. As I mentioned in my race report, my stomach was messed up the week before the Berryman Epic, and I think the lack of proper nutritional intake was what slowed me down so much. The week after the race was spent waiting and hoping my digestion would come around and I would get my strength back for the Storm the Greens CX race. When I didn't, Jason's pre-race pep talk call turned into a discussion of gallbladder symptoms and I spent the weekend waiting to talk to my doctor on Monday. I spent Storm the Greens camped out in the Shamrock Cycles tent, which is fun, but not as fun as getting to race first and drink after. (I figured whatever was wrong, I probably shouldn't pour hard cider on top of it.)
When I went to the doctor on Monday, she poked around on my abdomen and made the initial guess that it was, in fact, my gallbladder. I had blood work and an ultrasound done and then spent most the week waiting for results, and worrying about a future of compromised ability to break down dietary fat, just when I'd really started to fall in love with dietary fat. (Butter is my methadone and without it, I might go back on the hard stuff: Ben & Jerry's). As it were, I was nearing three weeks with compromised ability to break down dietary anything, and the ~1000 calories a day I was able tolerate weren't really cutting it.
On Thursday, I finally got the long awaited call with some unexpected, but not really surprising news. I get to to keep my gallbladder, but a baby pancreatic cyst that discover during a previous abdominal incident after my first Ouachita Challenge is apparently all grown up and pressing on the organs around it. No wonder I feel more full than usual after eating. So I still have to have an MRI next week, but the upshot is that I will have to have surgery of some sort and my CX is 99% likely to be over.
I'm disappointed but not devastated. I was looking forward to one more month of racing, especially since I've been enjoying 'cross much more than I have in a couple of years and placing better, as well. I spent the first half of the season waxing nostalgic about the old days when I was a 'cross devotee, but lost the love when I was repeatedly handed ass-whoopings by every new girl who rolled each weekend during the early explosions of the American Cyclocross Boom of 2007. When I started this season and realized that I could hold my own better than in the past, the famous opening lines of L.L. Cool J's "Momma Said Knock You Out", came to mind. Unfortunately, my threshold power isn't the only thing that's been growing since 2007.
The good news is that I should still be healed up in time to still get a good base for spring, and with the 11 pounds that I've lost since August, and the weight I will continue to lose until I get a full-time appetite back, I will likely be a much better climber next season. So I guess I will report back with my progress once all of the tests are done and the timeline has been established.
"I'm gonna knock you out, Momma said knock you out." - Lindsay to cyst
Posted by Lindsay Hall-Stec at 7:40 PM 3 comments: