I will buy your stupid black aluminum bike, but I fear that I will never love it as much as the beautiful white Alliance cousin that you promised in your 2010 catalog and that I have been patiently saving my money for since November. I'm not mad or anything... 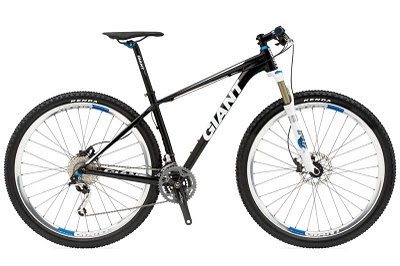 Dear readers, it is a sad day in the Rodkey bike basement, as today is finally the payday on which I have accumulated enough funds to purchase a Giant XCT Alliance 29er 2. However, while I was doing final accessory shopping yesterday and wondering one last time if I should go for the frame only instead of the complete bike, I discovered both had been removed from Giant's website. It turns out that they used up all their precious carbon fiber resources on higher end bikes that don't come in my size. Yes, that's right. I'm considered to be a waste of carbon fiber.
So after some deliberation, I've decided to settle for the nicer of the two aluminium models, which is actually spec'd out a bit better than the Alliance was. However, it does not match the white and pink saddle that I already have for it, nor the Vanderkitten "Ice" kit that I ordered for sole purpose that it was going to match my bike (and because I needed a backup plan when the last Velo Bella clothing order was placed through Primal Wear instead of Louis Garneau). I suppose I will now have to switch to the "Hot" color scheme for 2010. And my crystal blue helmet is going to clash with all of it.
In the end, it was interesting to realize that this is the most crushing disappointment that I've felt since my four year quest to find the right job reached a positive resolution last year. And honestly, if that's the worst thing that's happened in the last year, then that's still pretty good.
Anyway, the new bike should be here on Tuesday, and then I will set to work on pinking it out. I just hope the Anthem doesn't pick up on my disappointment and taunt it's new younger brother with "you were an accident, she wanted a white bike instead" jibes. I can't be riding around on a bike with low self esteem, you know.
Posted by Lindsay Hall-Stec at 7:40 AM 3 comments: 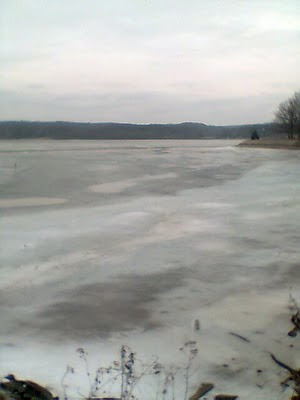 Nobody on the road,
nobody on the beach.
I feel it in the air,
the summer's out of reach
Empty lake, empty streets,
the sun goes down alone.
I'm [riding] by your house
though i know that you're not home...

These are the words that run through my head on every winter training ride across South Shore Drive, which I passed over twice during my three day weekend. I actually prefer riding across the causeway when the lake in frozen and empty. It feel likes the epitome of winter training.
Nothing about the the song is depressing. The summer's out of reach? That just means I have tons of time to get ready and it reminds me how early I'm starting. It's actually more true than normal this year, because after about five (so far) schedule revisions, I've elected to miss the first DINO race of the season to check Syllamo's Revenge off of my bike race bucket list. As a result, I will not be doing any XC races until DINO Brown County on June 6. That's 5.5 months away I'll be approaching fully peaked out condition for the June-July bulk of the DINO season. I'm not a huge fan of Winona Lake anyway.
As for my January condition, it's better than I was expecting. I've done two tempo workouts so far and I'm well ahead of where I started last year. I'm still a bit behind where I ended last year, but I think I will come back around fast. 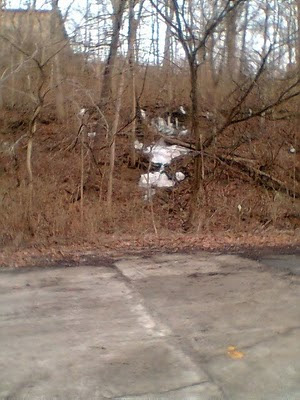 Here's my other favorite winter training scenery - the frozen waterfalls in Cascades Park.

Posted by Lindsay Hall-Stec at 7:32 AM No comments: 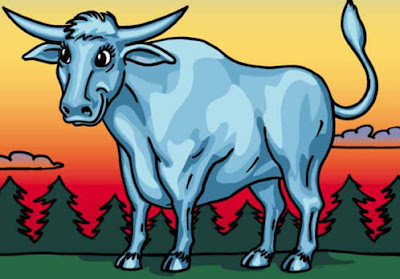 My first week of being able to leave work at 4:00 didn't yield nearly as much outdoor riding awesomeness as I had hoped. In addition to conditions of Jens Factor 3 (Jens Factor became my favorite thing last week) or worse, there was major snow dumpage all Thursday and Friday. More importantly, after a week of big base training in Oklahoma, I was just not that into the idea of coming back for three more weeks in the weight room with high cadence seated sprints as my only structured workouts on the bike. Mostly I was just ready to start using my newly available outdoor riding time to start logging some more significant training hours and start building my aerobic and muscular endurance for the Ouachita Challenge.
So I finally broke down and told Jason how de-motivated I was by my training plan, and begged to move on more base phase like training. I'm not sure if it's accurate to say that I got more than I bargained for, but he pulled no punches in my updated training plan. Tempo, Sweet Spot, bursty-bustiness, big weekend hours, oh my. It's going to be a shock to the system, which is a really good thing. No more uninspired spinning for me; I'm going to be strong as a big blue ox when the season begins.
Posted by Lindsay Hall-Stec at 12:44 PM No comments:

I made it back from Oklahoma safely and logged about 15.5 hours or so while I was there, although my power tap troubles left me with no official data to prove it. You're just gonna have to believe me. By the time it was over, I almost started feeling like a cyclist again.

By the end of the week I even managed to find the motivation to finish Sports Psychology for Cyclists, which turned out to be interesting, once I was in the right frame of mind. I order it several weeks ago, but after slipping into my winter malaise, it was looking like the only cycling-related book I'd be interested in reading would be "Dead F-ing Last", where Sookie Stackhouse travels to the Tour de France to bust a dirty team of cyclists who win by consuming vampire blood, getting beat up and "accidentally" making out with Eric somewhere along the way. (The sad thing is that I came up with this fictional title and plotline in under five minutes.)

Of course, a new year was rung in while I was there. I use passive voice, because I was kind of oblivious at the time, but when I returned to the real world, the blogosphere was full retrospectives and resolutions.

The only resolution I made this year was to take all of the cats to the vet for a check up, since I got a reality check at the cat food display the other day. I realized that Campbell and Sixx are old enough for the senior formula and Mrs. Biggleworth (aka the Furry) will be in one short year. Time to engage in better pet maintenance, so they all have appointments during my training rest days over the next couple of weeks.

Other than that, I'm not really "resolved" in anything specific. Yesterday I started my 7-4 winter work schedule, so I will be able to ride outside in semi-daylight until DST. That should be helpful in my upcoming season. I also came back to the real world resolved to eat better and be nicer, but I've kind of sucked at that so far, due to the stress of being an adult again. So I guess if those were New Year's Resolutions, I would have failed already, but they weren't.

For the last few months, I've been employing the phrase "don't stop believing" (Journey song optional) in a variety of situations. Knowing how quickly "resolve" crumbles, I'm just trying to be a little better for the time being whenever I can. I've come to realize that having something to strive for is more important than actually getting the thing for which I'm striving (Cycling success? I'm not even sure that I'll know if and when I get there.) I feel like I've chosen steep rugged path to follow for no tangible reason and with no idea what's really at the end. So I just do my best to keep taking steps in that direction and believing that it is the right thing for me.

(Okay, that was a little weird, but I think most human motivation is.)

Anyway, I didn't take a lot of pictures with my lobster-gloved hands in Oklahoma, but here's a picture of "Ol' Coaly", a mural of a bull throughing a rodeo clown in the air, which was the key landmark of my 4.5 hour New Year's Day ride. 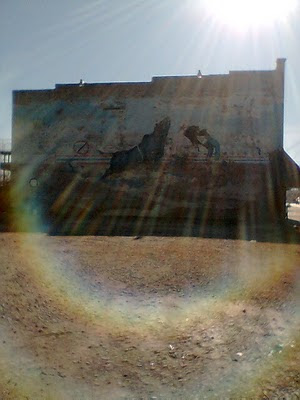 Posted by Lindsay Hall-Stec at 2:38 PM No comments: