Week #43: It Seemed Like a Good Idea at the Time

A friend of mine often reminds me that "mistakes are life's tuition", which is very helpful in light of the last year of my life. Whenever I want to go back and punch 20-something me for getting 30-something me into my current position (which most days feels like being 24, but, you know, with the added bonus of being old), it's helpful to remind myself that my ability to make good decisions now pretty much comes from all of those crappy ones I made before. So perhaps I'm not a screw-up for taking longer to settle into successful adulthood. Maybe while I'm doing my best to be a supportive girlfriend during the home stretch of Frank's academic career, maybe I'm also completing my own dissertation on life. I mention this because the past week does seem a bit defined by bad decisions, if ones of the more minor variety.

The first was actually made a few weeks ago when my mom offered to buy me a half hog from Schacht Farm for my birthday. So the bad decision was made when I put down the deposit and filled out the order form. The choice was basically to ham or not to ham. Despite the fact that I'm not a huge fan of ham, the novelty sounded good at the time. It was only a day or two before I went to pick up my meat when I realized that there would be *14 pounds* of ham that I could have just had them add to the ground pork portion instead. I then started having "ham regrets" regarding the proportion of processed versus unprocessed meat in my order.

I'm not a hater of processed meats by any means, as the typical arguments against them don't resonate with me. Saturated fat? Whatever. Salt? Whatever. Nitrates? Whatever. Sugar? Meh, I'm not crazy about the idea of sugar in meat, but it's a very tiny amount. I do, however, just sort of feel better when I eat meat that hasn't been preserved in any way, regardless of how natural the ingredient list is, so I've been trying to steer myself back toward plainer, if less tasty, breakfast meats. So the ham decision definitely worked against this, although it wouldn't really have been that big of deal had I not already been dealing with a very "on" anxiety switch this week. 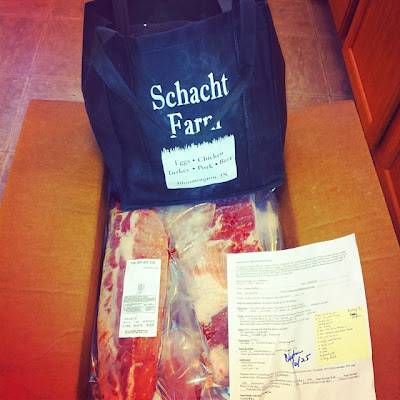 My other bad decision had to do with my costume for Eva Bandman Halloween 'Cross. Back in the spring I saw a Facebook ad for some ridiculous leopard-print leggings with weird cutout garter things. They were hilarious enough that I was actually willing to shell out the $20 to buy them. So for the Halloween 'cross race, I incorporated them into an "80's Hair Band Groupie" costume along with a homemade ripped and bedazzled T-shirt halter top.

I thought I could live without a chamois for a 40-minute race, and I probably could have with normal pants.  However, the various moving parts of the leggings conspired against me to form the most uncomfortable saddle contact ever and also gave me paranoia regarding exactly what the people behind me were seeing when I got out of the saddle for the three dismount/remounts and three steep descents per lap. I basically spent the entire race thinking about my pants. Add that to shock of what felt like my third "first race" this season after too many weeks without a hard effort. I basically had one good lap where I was sticking with the competition, and then slowly faded to next-to-last place. At that point I'd heard enough heckles about my "stripper" costume that I figured I'd just go with it, pull off the partially unhooked right legging, and tossed it in the Shamrock tent as I went by. It was good for some laughs, at least. 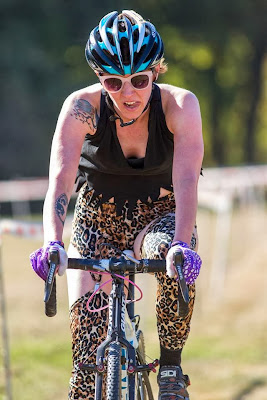 So, in the grand scheme of things, $84 of "wasted" meat (that I didn't pay for), a poor cyclocross performance, and a little self-induced embarrassment aren't the worst mistakes I could have made. I will, however, be avoiding bulk ham purchases in the future and only racing in costumes that allow for bibs underneath. And Frank is the only one allowed to see me "scandalously clad" from now on. Such is life, and I guess this just means I'm a little closer to earning my degree.

Posted by Lindsay Hall-Stec at 2:16 PM No comments:

I don't have any exciting news to tell or deep thoughts to share from the past week. Monday-Thursday was just normally scheduled work and training, and then I spent the weekend in State College with Frank. We had a great time soaking in the brief period of peak fall color before winter sets in by spending plenty of time in Rothrock State Forest. Saturday we slept kind of late, and rain was threatening, so we took a drizzly hike up some of the rockier of mountain bike trails that I'm not quite up to tackling yet. The views were a little obscured by the rain and fog, but any time you get to look out from a mountain top at fall foliage is a good day, especially when you're standing with your favorite person. 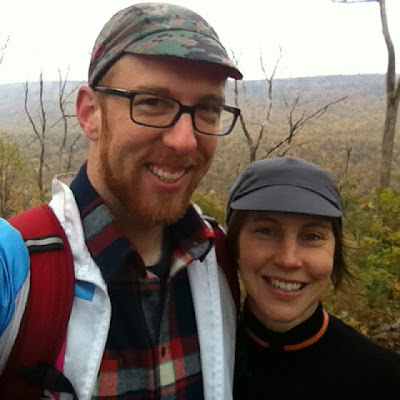 Sunday we tackled the gravel again, but with a little more distance and little less steep of climbs than last time. It was better this time knowing what I was getting into, although ~10 miles of shallow but steady climbing on the way back in had both of us desperately searching for the green port-a-potty that marked the peak of the climb before the final five-mile descent to the parking lot. When it finally came into sight, I called it the most beautiful port-a-potty in the world. I guess that's what shorter days and cyclocross season will do to you; after too many weeks of only short rides, one's butt gets unaccustomed to the feeling of just sitting and pedaling. Hopefully this will serve as a reminder to our bodies that will make our upcoming assault on the Sub-9 Gravel Grovel a little easier. 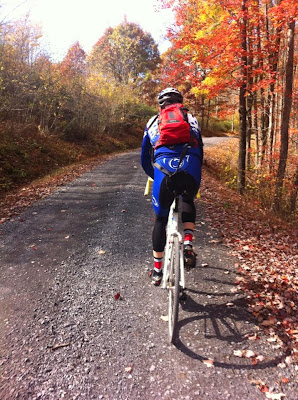 There's nothing too exciting to tell about the last week, except that my mom came to visit over the weekend. We kept up our touristy tradition, which seems to have switched from caverns to waterfalls now that we have covered all the major cavern tours in southern Indiana. Unfortunately, waterfalls seem to be more disappointing, because when we went to see Cataract Falls in the spring they were flooded, and when we went to Clifty Falls this weekend the water was barely flowing. Also all of the lookouts were from weird angles, so we never really got a good look. 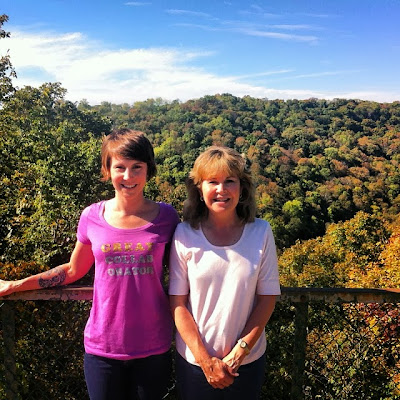 Otherwise, I guess things are going okay training-wise. I'm not getting a lot of bike miles in right now due to travel and CX season, but at least I've reestablished consistency in my riding and gym attendance. I even snuck out for a a little ride while my mom when to evening church yesterday. I'm a little frustrated because I feel like I'm stuck in a place where I'm just keeping myself from falling into worse shape, but not making any forward progress. Making progress is just a really hard thing to do during 'cross season.

I'm also feeling weird because I'm carrying around 2-4 pounds above where I was in the spring and early summer. As much as I hate when people talk about cycling to "burn calories", I suspect it does have something to do with the lack of endurance riding on my schedule lately. I'm trying to just accept it and know that it will go away again once CX is over and Death March training starts again. Until then, I just having to try not to annoy everyone by sounding like Regina from Mean Girls with my repeated, "I really want to lose three pounds."
Posted by Lindsay Hall-Stec at 11:36 AM No comments:

I just couldn't let the day pass without acknowledging that one year ago today, I accepted the offer for my current job. That change combined with a few other factors bubbling up in my life at the time to provide the impetus for the major life overhaul that has taken place since. It feels much more like five years than one.

The thing that stands out most about this day is that I had my last binge immediately following the final interview the day before they offered me the job. It started as a backlash to my taking the demand of 12% body fat from my college track coach way too seriously, but for 13 years food was how dealt with shit. Almost every time I binged I swore to myself that it was the last time, and then it wasn't. Then, on October 8, 2012, it really was, and I didn't even know it at the time. My life and my mindset changed in a way that made me want to fight for something real instead of fake comfort and my desire to binge significantly faded. I started facing my problems instead of running away from them, and as a result, have set the foundation for a much happier future (and I've lost a few pounds, too).

So I guess happy first birthday to the new me.

Posted by Lindsay Hall-Stec at 3:50 PM No comments:

Hmm, what to say about Gun Club? The traditional best race of the year was a complete rainy slop fest, and made for the new hardest conditions in which I'd ever ridden. There really isn't a lot to say otherwise. I got a not-so-great start, and did an okay job at working my way through traffic considering that I was completely unwilling to run the amount that one was required to run the first lap of the race to do well. Homegirl don't play that. Homegirl also admittedly had a "warm-up beer" before the race, if that is any indication of my motivation level. As it were, I did relatively well after I got going and finished the best of the anti-runners at the back of the pack. 23 out of 29 finishers is still one of my better elite wave finishes.

So with a couple of muddy weeks in a row, it is already time for a little break in my 'cross season while I entertain my mom next weekend and visit Frank the next. Then my next race will be wearing a costume. Yeah, so I'm not doing so great on setting myself up for success thing, but you never know what will happen.

So here's a few pictures from the weekend:

Posted by Lindsay Hall-Stec at 3:16 PM No comments: