It's hard to believe that it's been nearly six months since my last post. 2019 has been a strange year for sure, and once Frank broke his collarbone, it became clear that it would be the first year since 2003 that I did not pay money to be timed while riding a bike in any format. The fall became busy with non-bike stuff, and at some point, I decided that I would wait until winter break to post again.


After the year that we had, Frank and I decided to give ourselves the gift of zero holiday travel this year. We had Thanksgiving at our house with one friend, and haven't done a whole lot over Christmas break. For Christmas day, we went to see the new Star Wars movie and went to dinner at the Chinese/Hibachi/Sushi restaurant across the street from our house. Unfortunately, it will be changing locations soon, and we had never eaten Hibachi there, so we gave it a shot. The group whose gathering we crashed were good sports about it, and we all had a good time. 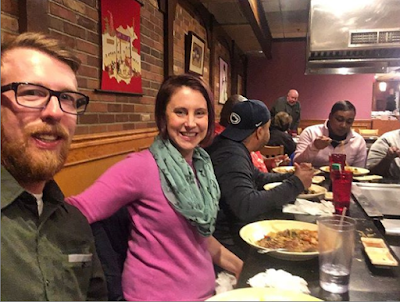 2019 certainly wasn't devoid of bikes, but they took more of a backseat than they usually do. I was most concerned about having the chest strength and nerve to still ride downhill fast after my double mastectomy and reconstruction, but that turned out to be the easy part. Within a few weeks of being cleared to mountain bike again, I was riding downhill as fast as I ever was.

In fact, after several monthly sessions with a massage therapist, I have no lingering pain, tightness, or discomfort. The only remaining negative effect is that I still don't have much feeling in my chest, left armpit, or the back of my left arm. However, the numbness has improved slightly over the last few months. Still, it makes sense that skin stuffed with inorganic material will never regenerate nerves that well. Now that all of the remaining inflammation from the surgery is gone, I can also confirm the rumor that reconstructed breasts feel cold to the touch most of the time. This prompts me to believe that people need to be more sympathetic to witches if the saying about them is accurate.

In addition to Frank's and my respective surgeries,  my shortage of races and bike park days 2019 can mostly be attributed to just plain adulting too hard last few months. I found out right before my surgery in January that my supervisor of nearly five years was transitioning to a different role within the organization. I'm assuming that coming back from a two-month leave is always tricky, but I came back to an especially strange situation. I was greeted back to work with the opportunity to join a couple of high-profile project teams but also a heavy load of tactical tasks meant to achieve my old supervisor's exit strategy. I scrambled through April and May to complete my 'want to do's' and my 'have to do's' within the required timelines.

I was nervous about having a new supervisor in June, but that part has gone exceptionally well. Our good teamwork and some favorable conditions within our department have allowed us to make a lot of positive changes in the last few months. My excitement has led me to voluntarily spend many evenings and weekends preparing documents to help our leaders make their next important decision. It has also meant that I don't have a lot of motivation left to get into shape or wake up early on weekends to go to bike parks.

Even during our lovely winter stay-cation, I've spent time each day studying for another certification exam that will help me to be even more effective at my job. I've also been really terrible at going to the gym or doing Zwift workouts, despite having plenty of time to do so. The exam is tomorrow, so, considering that I pass, I hope to have more mental energy for bikes soon.

I don't have a particular resolution for 2020, but I want to rekindle my motivation for riding and racing. The challenge will be finding emotional space for this while still maintaining my hot streak at my day job. I don't have a plan yet but will start getting back into the posting habit over the next few weeks to let you know how I do.
Posted by Lindsay Hall-Stec at 4:41 PM 1 comment: