This winter won't fly, it's like I'm paralyzed by it
I'd like to be my old self again, but I'm still trying to find it
After plaid shirts at Ray’s and nights on the RipRow
Now I’m hike-a-biking up this snowy mountain alone

But I still have Snowshoe dirt in the bottom of my feet
And it reminds me of the good times down in WV
I can't get rid of it, 'cause I remember it all too well

It feels like a very unoriginal thing to say after seeing so many variations on “happy second day of spring” Instagram posts of snowy yards across the entirety of the Eastern time zone a couple of days ago, but this winter has been a tougher one for me than usual. Of course, at this point, it’s technically no longer winter and I think it’s probably tough for everyone save the most hardcore of trainer lovers or those people who like *gasp* winter sports. Since my last post, I’ve played around with dirt (or actually wood) jumping, attended the Ray’s Women’s Weekend, and spent time getting better at the RipRow. I’ve been able to go on a handful of outdoor mountain bike rides, but not a lot, and I was just feeling too busy and/or uninspired to post about any of it. At some point, I kind of gave up on posting about the events of winter, and decided that this week would be my turning point. It felt like as good of one as any, as this past weekend was the Rothrock Ruckus training camp at the Stokesville Lodge near Harrisonburg, VA, and I expected that I’d come back with some stories worth telling.

For the past couple years Rothrock Ruckus has referred both a somewhat informal group State College enduro racers and the Wednesday night rides that they do. This year they are forming into a more official team, and Frank is joining them as a member. When Frank mentioned that they would be having a training camp near Harrisonburg, I wasn’t sure if I was invited, and even so, if I should go. However, when he told me that Gloria (of G.L.O.E. fame) would also be coming along with a couple of non-Ruckus friends, I decided to go. Although I knew that I’d be the slowest person there, I figured that it was something that I needed to do to try and get myself out of my recent funk.

The first day was definitely...something. Despite Harrisonburg’s reputation as the place that you go to get better weather in the winter, we learned on Friday night that there was still a considerable amount of snow on top of the mountains. We sat around the big map-covered dining table, as Ryan, the super-fast guy who was organizing the weekend, showed us the intended route, which had 18 and 34 mile options. While 34 miles at that difficulty level seemed outside of my current fitness level, I set out with the best of intentions of making it to the top of Reddish Knob with everyone else, since Frank and I made a wrong turn and missed the Wolf Ridge descent last time we’d been there. I really wanted to get that descent in, even if it meant a helluva lot of climbing to get there.

When the climbing commenced, I quickly fell off from the group, but I did my best try and not feel bad about that. I was riding as fast as I could without blowing up and getting in some much-needed climbing time, and as the person who’s slowest in most groups, I’m trying to embrace the whole “say thank you, not sorry” thing. At the same time, when nine other people have to stand still in sub-40 degree temperatures for significant amounts of time thanks to me, the urge to say “sorry” is pretty strong.


Up until we hit the first singletrack, I would say that the ride was uncomfortable, but still fine. According to the map, we were supposed to climb a ~2 mile trail and pop out on a road to climb a few more miles up to Reddish Knob. What transpired was over two hours of pushing my enduro bike up an average 14% grade of snow-covered rocks in slightly too big winter cycling shoes that just weren’t meant for that much walking. To make matters worse, something went wrong with my shifting such that I couldn’t use my three easiest gears, so even on the rare snow-free section I couldn’t get back on and pedal. It was perhaps the longest bike-related two hours of my life, as I would think I was nearing the top, only to come around a curve and find a new tier of the climb. Finally, Frank came back sans bike and helped me push the rest of the way. He had sent the others on without me, and most had already opted to stick to the 18-mile option. 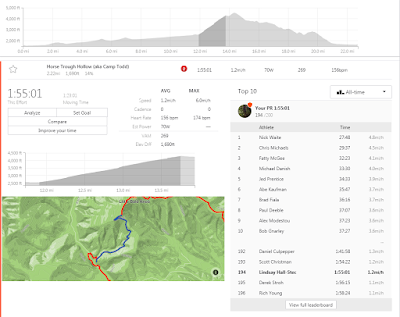 As we reached the “road”, we found that the four brave souls who had attempted the final ascent to Reddish Knob had turned back and were planning on going back down. The “road” was at best double track, but it was hard to tell what it was supposed to be under the 4-6 inches of snow at the top of the mountain. Any hopes of an easy cruise down were dashed as we began foot-out skidding down the snowy trail-road. Even as we began to get to lower elevations and some clear patches of trail, it still was not easy going. The “downhill” still had plenty of short, steep uphill sections that often resulted in more hiking, due to my limited gears and trashed legs.

Frank and I had quickly become separated from the fast group, and made way our back to the lodge alone. We ended up taking a wrong turn which resulted in even more climbing and a longer overall distance than the rest of the group. At least after many teasing ups and downs, we finally hit a good sustained descent at the end, and finally got to experience a full-blast open descent for the first time in months. That part was so nice that it *almost* made the previous six hours of suffering worth it.

The second day was not so exciting for Frank and me, because we went to the Massanutten Western Slope area, but my legs were pretty much garbage from the start. He stayed back with me, and we just sort of puttered around while the rest of the group went on a bigger ride.

In the end, it was a worthwhile trip, even if I didn’t get in all of the descending practice that I’d hoped I would. I got a few tastes of going fast again, and it was beautiful. I’m proud of myself for at least trying to do the same difficult route as the faster people, unlike my old Speedway Wheelmen training camp days when I would automatically plan an easier route for myself from the beginning.

Unfortunately, as we wait for Wednesday’s new dump of snow to melt, my escape from my winter funk has been delayed a bit further. It’s disappointing, but in a way it will make me more appreciative when it finally goes away. I’m so past caring about not being in shape anymore or even being ready for early season races. I just want to be able to ride my bike downhill fast on a regular basis again. In a way, that’s pretty cool, because preparing for bike races was never really fun in any of my past disciplines. Now once the snow melts, I'll gave a big “fork you” to winter and just do stuff I enjoy knowing that it will make me as fit as I need to be by the time I need to be. It’s still six months until have to climb that silly access road in Burke, right?

Posted by Lindsay Hall-Stec at 1:03 PM No comments: