A New View of Pisgah

The main reason that it took me a week and a half to finish my race report from Slaty Fork is that rather than returning home after the race, the next day we continued south to North Carolina for a week in Pisgah. My only previous experience in Pisgah was in 2009, and it wasn't great. Apparently, at the time I claimed it would be my last death march. Silly 2009 me, Death March wasn't even invented yet, and it was ironically, the thing that renewed my interested in endurance events after I walked away from them for a couple of years. Since I moved to my own set of mountains 3.5 years ago and now have a partner who's willing to join me on mountain bike adventures, I'd been wanting to go back to Pisgah and see it with fresher, more gnar-friendly eyes.

We finally decided to sneak in a trip between Frank's summer and fall class sessions, which is the main reason we combined Slaty Fork and Pisgah into one trip. Ideally we wouldn't have done a pretty long enduro race leading up to the trip, but we also didn't want to miss the race and managed to make both work. 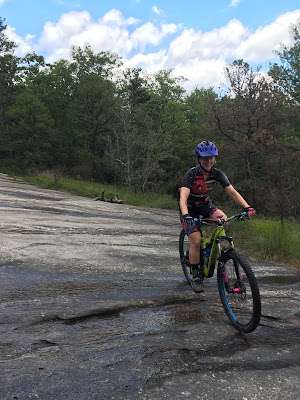 Monday was our travel/rest day, so we first hit the trails on Tuesday. We hit up the DuPont State Forest trails for our first ride, thinking they might be a kinder transition that full Pisgah gnar on the first ride. I think that was a good choice. I'd always been fascinated by people's pictures from riding the slick rock there, and it lived up to my expectations. We also did some flowy machine cut jawns, because those can fun too sometimes.


Wednesday we did middle and lower Black Mountain as well as Bennett Gap. This was the day that I really started to understand why people love Pisgah so much. Black Mountain was amazing, because it managed to be really damn gnarly and technical, but also somehow flowy at the same time. It was also really satisfying to take stock of how many sections I was able to ride that I probably couldn't have a year ago, and 2009 me probably couldn't have even conceived. Of course, it was warmer and dryer than the last time I was there.

Perhaps it was a little too warm, as we decided to never again travel south in August by the time the trip was over. We had a good time, but just getting through the 10-15 miles a day that we were riding was a struggle. We mostly kept it in the fun zone while planning our routes and didn't even attempt anything akin to the Pisgah Mountain Bike Stage race. I'm smarter now and understand Pisgah miles, which are even longer than Rothrock miles, I think. I do occasionally have thoughts of giving the stage race another shot again someday, but for this trip, we just wanted to check out some new terrain without killing ourselves. 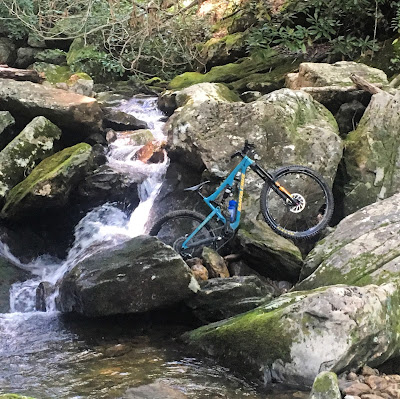 Okay, maybe we tried to kill ourselves a little. After watching the "Trail Boss" episode of Farlow Gap, we just *had* to see it for ourselves. We weren't silly enough to think we could all or even most of it, but we did make a sort of silly decision that I should rent the small Bronson CC in front of The Hub to satisfy some of my Roubion curiosity. My Hail is great for going really fast downhill, but it it tends to suck at getting to the the start of downhills by means other than gentle gravel roads or chair lifts, so I've been searching for something with big bike capabilities that pedals a bit better.

It's actually not the best idea to ride the hardest trail that you've ever been on using a bike that you've never ridden and that is only semi set up for you, so I can't say that my trip through Farlow Gap was super fun. We were also a bit stressed about getting the bike back before the shop closed, which didn't help. The good news is that our curiosity has been satisfied, and I think we're okay with not attempting Farlow Gap again for a long time.

Overall, this trip to Pisgah was a lot more fun than the last. Good company, good skills, and lack of snow are all highly recommended.
Posted by Lindsay Hall-Stec at 4:27 PM No comments:

Don’t fight in the North or the South. Fight every battle everywhere, always in your mind. Everyone is your enemy, everyone is your friend. Every possible series of events is happening all at once. Live that way and nothing will surprise you. Everything that happens will be something that you’ve seen before. – Petyr “Littlefinger” Baelish, Game of Thrones

While reflecting on what I wanted to say about the Slaty Fork Enduro a week later after I’d finally returned to a reliable Internet connection, I was a bit uninspired at first. Was it even worth going back and writing a report for a race that I had “won” unopposed? What I had I really learned or achieved other than getting one step closer to securing the Sport women’s series title for the West Virginia Enduro Series? Aside from the ever-present mud, the Slaty Fork Enduro was very different from the previous WVES race at Valley Falls. Unlike the drop-filled Valley Falls course, there was nothing that I “couldn’t” ride at Slaty Fork, but that still didn’t translate into a flawless race by any means. In that realization I began to contemplate the fluid definition of “can ride” and “can’t ride” when it comes to enduro.

Frank and I got up at 5:00 last Saturday morning to make sure that we were ready to ensure that we were fed, dressed, and ready to board the single noon shuttle for pre-riding in Slaty Fork, which was five hours away. Once we were on the trails and I realized how long and brutal the transitions after Stages 1 and 2 were, I started to wonder if the pre-ride was doing me more harm than good. It took me three hours to get to the end of Stage 3 and it was around 4:00 p.m. at that point. I’d seen video of most of Stages 4 & 5, and I was pretty sure a shower, food, and a good night’s sleep would probably do me more good than two more hours of bumbling through the woods trying to scout lines. I don’t regret my decision to get a ride back and get cleaned up and fed early in favor of pre-riding the last two stages.


On race day, the first three stages were mostly just fast and slick with no especially prominent features. I was pretty happy with my Stage 2, which didn’t necessarily suit me with its multiple transitions between pedally sections and fast, loose no-brakes stuff, but I stayed focused and did well within my current capabilities. The last few weeks I’ve been coming to the realization that as much work as I’ve been putting into increasing the bandwidth of features that I “can ride”, what’s really standing between me and the next level is weaning myself off my brakes when it’s fast and loose. So I spent a lot of Stage 2 trying to be hyper-aware of my urge to brake and trying ease my discomfort through attention to balance and body position rather than slowing down.


After a slick and sloppy Stage 3 and shuttle to Stage 4, it was time to enter unchartered territory. Having not pre-ridden the last two stages, all I’d heard about was the “mile-long rock garden” at the beginning of Stage 4. It was actually funny listening to people in line complaining about it, while I was mostly looking forward to it, rocks kind of being my thing and all. At the same time, I didn’t really go in with expectations that I would clear the whole thing riding blind. Spoilers, I didn’t. I actually probably made as many mistakes as the self-professed rock haters did.

For all of its lack in features that I “couldn’t” ride, Slaty Fork still presented a vast array of challenges. Just because I have the capability to ride something cleanly still doesn’t always mean that I always will. It’s just that the consequences of failing to clean a rock garden are a lot less than failing to correctly land a drop.

I knew going into the day that I was the only Sport woman entered, so in some ways I didn't feel much competitive pressure. However, I was still disappointed to see that I had finished six minutes behind the last-place Expert woman when it was all over. To be fair, the same woman beat me by eight minutes at Big Bear and by four at Cooper’s Rock, so the margin has been pretty stable relative to the overall finish times all season. I just wish it was shrinking a bit more quickly. I have one more race left in West Virginia before I feel morally obligated to move up to expert, but a long way to go ability-wise if I don’t want to get utterly destroyed when I do. 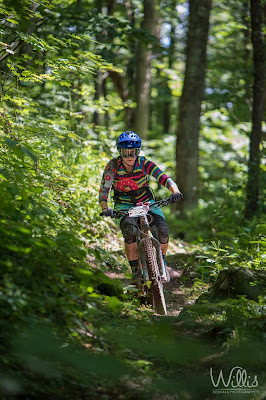 In the time since the race I’ve reflected a lot about all of the areas in which I need to improve before next season. I thought about how, up until this point, I’ve focused so much on riding things that I previous couldn’t, which is of course cool and useful. However, with the exception of rare courses like Valley Falls, riding bigger and harder things won’t close that much of the gap between myself and the Expert women. My real gains will come from learning to do what I already know how to, but better and more consistently. Like the “mile-long rock garden”, it’s not enough to be theoretically comfortable with something under the best circumstances; I need to be ready to see multiple lines and executed any of them…and do it fast.

This is why I thought of quote at the beginning. Enduro is an amazing combination that requires a rider to be good at everything. As I finish up this season and prepare for the next, I’m challenging myself to let go of ideas about my strengths and weaknesses as a rider. Every trail is my enemy; every trail is my friend.


"Chaos isn't a pit. Chaos is a ladder. Many who try to climb it fail and never get to try again. The fall breaks them. And some, are given a chance to climb. They refuse, they cling to the realm or the gods or love. Illusions. Only the ladder is real. The climb is all there is." - Also Littlefinger
Posted by Lindsay Hall-Stec at 4:24 PM No comments: