And darlin', it was good
Never lookin' down
And right there where we stood
Was holy ground

In my last post, I said that I didn't have a New Year's resolution for 2020.  I later realized that I did have one and that it could be described using a favorite hashtag from my former teammate, Elisabeth. My resolution was to be a better #professionalslashbikeracer again. After surgery took me out of the bike racing scene for the entirety of 2019, I turned all of my motivational forces toward work in a way that I never had before. As a result, I didn't race for the entirety of 2019 and never regained my pre-surgery fitness. I came into 2020 ready to realign my work/bike balance. Still, I ended up spending January distracted by the possibility of the ultimate #professionalslashbikeracer move.

One morning in December, while cyclocross nationals were in progress, I started looking at a map of Washington to see where they were being held. As I looked at the map of Washington, I thought of my friends Sam and Kyle, who had recently moved to Bellingham, which is arguably the most optimal place to live as a mountain biker in the United States. I vaguely remembered that there was a mid-size university in Bellingham, and I decided to look at the job listings there.

Typically, mid-size universities in top-tier mountain biking locations don't have a lot of jobs listed, and rarely do they have any for which I would want to apply. However, on that fateful day in December, Western Washington University just happened to have my dream job listed. What I mean is that if I made up a perfect job for myself, this would have been it, plus a couple of other things that I wouldn't have to add myself. I immediately started working on my application and then waited for them to begin reviewing applicants.

They contacted me for a phone interview over Christmas break, and once that was complete, things really started moving. They contacted me the next day and arranged for me to fly to Bellingham the following week. They covered all of my expenses and offered to introduce me to a realtor to show me houses, so it all seemed very promising.


My trip and my interview went well. I got to see Sam and Kyle as well as tour some houses. I took a class Terrain Gym, which is a little like Crossfit, but better planned and targeted at outdoor athletes. I was starting to make plans for how I was going to move five pets across the country and which house to make an offer on.

***
Five pets you ask? Yes, I never managed to post about my one success of 2020 with all of the excitement of a potential move to Bellingham. This is Willie, the #fixerpupper that I acquired in the first week of January. I'd been trying to adopt a Brussels Griffon for a year and a half with no luck when this guy popped up on Petfinder. He was located at a small Central Pennsylvania animal shelter that required applicants to show up and apply in person, so I thought he might finally be my shot after way too much competition for all of the other for which I'd applied. However, when we got there to meet him, there was already another couple in line to meet him before us. When I called a week later to check on our application status, they said they had so many applications that they didn't know how they would choose. I wrote an email explanation why I thought we'd be a good home for him, but quickly moved on due to all my other rejections, it was long before Frank was ready to drive to Chicago buy me a Brussels Griffon puppy. The night before he was supposed to leave, we got the call that we were getting Willie and instead drove to Dubois to pick him up the next day.

He had been very poorly taken care of at his previous home, and not much better at the shelter. He was filthy and overweight, and when we took him to the vet, we found out he had Lyme's disease. His teeth were in terrible shape, but we couldn't get those fixed until he had been on antibiotics for a while. His toenails were also growing around into his paw pad making it hard for him to walks.

He finally got the teeth done and big, nasty wart removed from his head this week, so it is nice to have vet stuff behind us. He's started to be less scared of us and spends most of his time outside of his crate after 2-3 weeks always hiding in there except for walks. He can get on the couch himself and has started barking sometimes, which is a sign he's getting more confident. He has a professional grooming appointment next week, which took a while because our dog groomer friend was recovering from surgery and then was booked for a while after returning to work. I'm hoping his upcoming makeover will mark the first day of the rest of his life as a healthy, confident, and loved little pupper. 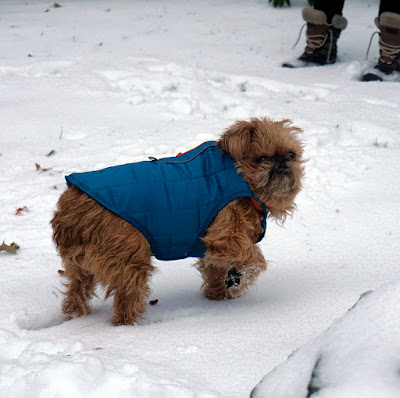 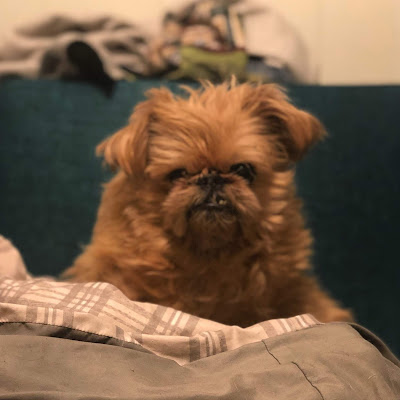 ***
Things took a nosedive when I got home. First, I got a gnarly viral infection from my travels, from which I'm still not fully recovered. They notified me by email six days after the interview that I didn't get the job.

It was hard to get over the shock and disappoint at first, and in some ways, I'm definitely still not over it. To come so close to getting the perfect job in the perfect place immediately after the shitstorm of 2019 felt like a cruel tease. I definitely had a couple of depairing days where I couldn't really even conceive of what it was that I wanted if I couldn't have my dream scenario. However, part of my realization was that I really, really needed to start racing my bike again to start feeling whole.

Due to my illness, I've only been to the gym once since returning from Bellingham. I'm going on a ski trip to Vermont this weekend, so it will be a few days before any more "training" can occur. However, when I return, it will be time to get serious about achieving #professionalslashbikeracer status in Central Pennsylvania, limitations and all. I'm in the process of hiring a coach for the first time since 2012, so I'll be updating on that once it's all finalized.

The last year and a half has brought a lot of disappointment as a bike racer and quite a bit as a professional, as well. I've also had some pretty big wins in the professional realm. I plan to keep building on these until someone at Penn State, or even better, some picturesque little campus in the Pacific Northwest, realizes my true potential. Until then, I've got to slip back into my East Coast #femdurobro identity and keep in touch with the other, less talented but more gritty, half of my personality.
Posted by Lindsay Hall-Stec at 7:34 PM No comments: