I want to get college girl drunk tonight
No morning fears, no mountains to climb

Even though I’ve recognized the folly in trying to write blog posts about races before they happen, when I heard this song last week, I couldn’t help but imagine it would be a good lead-in for today’s post. Besides, it wasn’t so much a premonition of the race itself, but how I expected that I would feel afterward.

Going to into this weekend’s WV Enduro Series finale in Snowshoe felt like an endcap to the downward spiral that began at nationals there in July. Not that I regret taking a five-day bike park trip in the interim, but my fitness is definitely waning, I’m really burned out from travelling so much in the last couple of months, and I’m feeling very chubby from continued vacation-mode eating. In short, I wasn’t feeling very motivated to race or feeling very confident in my ability to race well, especially with the bad memories of nationals still hanging over Snowshoe for me. Still, we made plans to race at Snowshoe and to stay through Monday for “party laps”, since there were still quite a few trails we didn’t get to ride when we visited in May.

All that being said, I went into the race with my best “give a shit” effort, and it kinda sorta worked.

The first stage of the race was Bailout, which was one of the more frustrating stages of nationals. It’s about a mile long, and doesn’t really feel downhill most of the time. It was a complete sludgefest at last year’s WV finale, but was merely slimy at nationals and this weekend. It’s just a very, very technical trail with lots of slick rocks and roots, as well as a lot of tight corners that don’t allow you to see what’s coming up next.

When I began my race run, I reminded myself to stay really, really focused but not necessarily to try to go hard. I stayed on my bike the longest that I ever have on a run of Bailout, which was about halfway into the big, perpetually muddy rock garden about a third of the way through. Although at times it felt slow, I just kept reminding myself that I was doing the best on Bailout that I ever had. When I did have to get off, I would run, but as soon as I was on again, I would get back into steady piecing together of the technical bits. Despite the fact that Bailout is never pretty, having made a big improvement on it helped motivate me for the rest of the race. 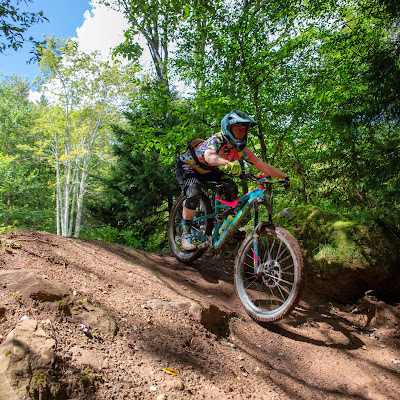 As the day wore on, I just kept focusing on staying on my bike and making as few mistakes as possible, which in itself is always a challenge at Snowshoe. When it was over, I found that I had PR’d every single Strava segment on the course, except for the transfer to the first stage, which I had ridden intentionally slow. Although I was still last place by 4.5 minutes, Sue Haywood won both last year and this year with times of 26:24 and 26:41 respectively, while I improved from 45:08 to 38:51. I knew at the end of last season that I had a huge gap to cover between the sport and the pro/expert class, and while I didn’t manage to make it all up in one year, I was able to put a dent in it. I did what I could, and now it’s time to start figuring out how to get the rest of the way next season.

It was admittedly a relief to cap off the series, and we celebrated with beer and pizza among friends in the Snowshoe Village that night. In the morning, we got in our party laps in, and I got to ride some silly trails that I’d never ridden before.

Now I’m looking forward to a long stretch of sleeping my own bed, although we may still venture back to Thunder Mountain before it closes for the season. As for racing, we’ll still do the Raven Enduro in October because it’s in State College, but my only real goal for that is to not be in terrible shape this time so that it doesn’t suck to just get through the race. We might also still hit the MASS finale at Glenn Park if we feel like it. Otherwise, I’m just going to start working on getting ready for next season.

Posted by Lindsay Hall-Stec at 7:05 PM No comments: