Rothrock TrailMix: So I Didn't DNF

This past weekend I accomplished a goal that had eluded me for two years: I finished the long course at the Rothrock TrailMix. A couple of qualifications to this are that a) A bridge was out on the road up to the John Wert trail, which is the most technical trail of the traditional long course, which adds an extra “ain’t nobody got time for this” aspect with its placement near the end of the deceptively hard 36 mile course. So having not included the John Wert trail, I still don’t feel like I’ve finished the *real* long course. b) Implicit in my goal of finishing was that finishing meant something closer to the five hour mark than the six hour mark and not just simple dragging my blown-out body through the length of the course before the point that the race staff kicked me off of it.

However, when my body came undone from the heat less than halfway into the race, I was not too concerned with the qualifiers. As I drug myself up the next climb, which took over 38 minutes, and later as I passed various points of the course that would have provided an easy bailout, I mostly thought about telling my teammate Taryn about my two years’ worth of attempts at finishing this race. She seemed impressed that I was still trying after my previous failed attempts. She’s only been riding bikes beyond commuting for about a year, and she’s already way faster than me, so it’s a little hard telling such a story to someone who has yet to fail really hard at something cycling-wise. You never know whether you’ll get sympathy, admiration, or judgment, because it can’t actually be as hard you say it is, right? Luckily, I got the first two from her and latter mostly just came from myself. As I continued my slow and painful forward motion through the rest of the course on Saturday, I realized that I couldn’t control the course modifications or my lack of speed, but it was totally in my power to avoid telling Taryn that I had DNF’d again. So I didn’t DNF. 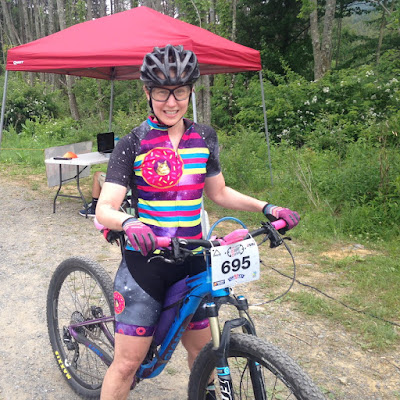 I knew going into the race that my speed wasn’t where I wanted it to be, but I thought that with the substitution of gravel road for John Wert, I might still be able to finish in around 5 hours. However, the mid-to-upper 80’s temperatures prompted me to throw out any time goals the morning before the race began. The rapid jump from 60’s to 80’s a couple of weeks ago has left me reevaluating my perceived fitness level and hoping some heat tolerance kicks in before July 23.

I started off at a purposefully moderate pace, repeatedly reminding myself to reign in my effort, and still managing a pretty okay pace through the top of Bear Gap. I was ahead of at least three long course riders that I’d passed on the XC Loop and had made it through first singletrack section with only the top 5 men from the short course race catching me. During my first long course attempt in 2014, I was already at the back of the short course field, who started 15 minutes after me, by the time I finished the XC Loop, realized how far in over my head I was, and called it a day. The only place I actually tried to go fast was the McGuire descent on the XC Loop, a QOM that I’ve been chasing as long as I’ve been chasing a TrailMix finish. With the course clear and the trail as buff as Rothrock trail gets, I laid it out for 5 minutes and 57 seconds to become ruler of one of two descents in Rothrock that are actually more fun than exhausting and scary. 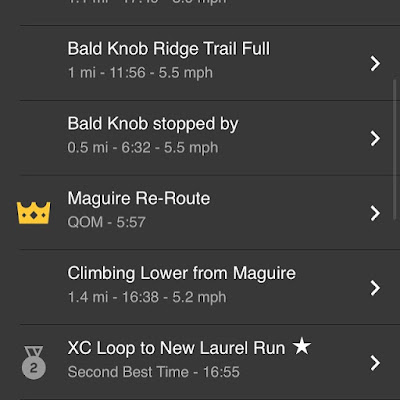 Speaking of exhausting and scary descents, the Croyle descent was where I started to crack. This one gives you the choice of exhausting or scary. It's steep but not crazy steep with some loose rocks and very small drops, stuff that is actually pretty easy in small doses. It just goes on forever and the speed at which you will hurtle over the individually-tame loose rocks and small drops becomes scary, unless you ride your brakes the entire time, which is exhausting. I tried to let loose as much as possible, and it was by far my fastest time on that descent, but the eight minutes it took was still enough for my quads, arms, and core muscles to all be screaming from the sustained aggressive descending position by the bottom.

I had a couple of minutes of easy spinning on gravel before the biggest climb of the day. That’s where the real “everything hurts and I’m dying” kicked in. From there it was just a matter of will to turn pedals through each section and win the negotiation with myself to move on to the next one. I was surprised when I saw a decent number of people from my race at the one full aid station just beyond the halfway point of the race. They all left before me, but when I set out onto Tussey Ridge at a pace so slow that it was confusing to see the familiar trail at that speed, I still managed to pick people off one by one. I guess my two years’ of failure did result in a proper respect for how hard the race is and even when I’m hurting, save something for the challenges to come. Finally, many rest breaks and internal negotiations later I reached the finish line with the peace of mind that I would not have a third TrailMix DNF hanging over my head. Better yet, I was several places out of last place and managed to avoid the six-hour mark, even though I was thoroughly past my goal of five.

As someone whose history with big, long goal races is mostly split between DNF’s and races that I stubbornly gutted out at the back of the pack when the merits of doing so were questionable, with a precious few occasions where things actually ended well, I feel like I have a different perspective on the whole “death before DNF” thing. I have huge respect for those who stick it out through sometimes hours and hours of drudgery when their plans go south, but I also don’t hold any negative judgment for those who choose to hang it up and live to fight again another day. Each person has their own goals and motivations when they roll up to the starting line, and some days when go wrong the price of finishing is simply not worth the reward, and that’s totally okay. It’s your investment of money, training, and pride to do with what you want. As I rolled through the final stretch of pavement, I reflected on my past attempts at the race, how my riding had improved since I first started scouting the course in April 2014, and how even though I still wasn't as fast as I wanted to be, on that particular day it meant everything to me just to say that I had finally made it to the finish line.

I do recommend dragging yourself to the logical conclusion of a death march (not the fun kind) at least once just so that you know you can. There is a definite satisfaction in knowing that, and in my case, getting a reminder every once in a while. Saturday was a good reminder that I can do what I need to when price of not DNFing is great, but the reward/consequence is still greater. So I didn’t DNF.

Posted by Lindsay Hall-Stec at 5:13 PM No comments:

It’s a little embarrassing when the cheesy pseudo-inspirational music piped into the gym becomes actually inspiring, especially when it’s an extra-cheesy Bon-Jovi-for-the-millennium ditty that I never liked when it was at the height of its popularity. However, as I was working through my (still) assisted pull-ups on Monday, I caught the bit about Tommy and Gina who never backed down. It struck a chord with me, referencing the Bon-Jovi-for-the-time-period-Bon-Jovi anthem that I parodied into the name of this now nine-year-old blog.

For three weekends in a row, my progress has stagnated in different ways, and the weeks before Wilderness 101 are ticking away way too quickly. This has pulled my thoughts away from signs that this might finally be my breakout year to how little permanent improvement I’ve really made after ten years in this sport, how I’m approaching an age where improving on my decade of mediocrity will only become more difficult, and worrying about many other little things that I can’t very well answer, like if birth control is making me fat and slow. (Yes, I’m aware that pregnancy would also make me fat and slow, but how much does that even apply, now that I’m “old”?) Suddenly, the cheesy song seemed to answer my doubts line by line (save the birth control thing).

I often get frustrated that at how little I have to show for my years of riding and feel like there’s something wrong with me because it seems that most average cyclists would not take as long as I have to be fit enough to finish mid-pack in a race like the Wilderness 101. Even now, I’m only getting close because of laser focus on that objective with a lot of short-term sacrifice of any other bike-related goals. Still, it means something that I never (completely) gave up on the sport that’s held my imagination for all of this time. Although Tommy and Gina could have used some coaching on S.M.A.R.T. goals, as “making it” was always a bit vague, apparently they never backed down, and neither did I.

Now I’m really close to accomplishing a big goal that I’ll be very proud of if it comes together, but I almost feel like I’m not allowed to be proud because it’s not that big of an accomplishment by other people’s standards. It’s not truly now or never, as I’m not really that old, but I think that maybe this will be the year of my actually doing the thing I set out to do. As I've mentioned before, whenever I actually manage to do the thing I set out to do, it's huge for me. The journey hasn’t been ideal, but it’s been mine, and there’s more to come. When it comes down to it, I just really want to keep improving as much as I can for as long as I can. Or, you know, live while I’m alive.

Posted by Lindsay Hall-Stec at 4:36 PM No comments: