With an eight-week break between my last regular-season enduro race and the late-fall source of ambivalence that is the Raven Enduro, I decided that I would use the lack of races and subsequent race reports to take a blogging break. I knew I was very tired mentally physically going into the Bear Creek race, but what transpired over the next few weeks was an even bigger break that I was expecting. During this time, I got dangerously close to making “I Only Ride Park” a true statement in both the literal and ironic senses, as my riding consisted almost souly of trips to Blue Mountain and Mountain Creek on the weekends and about a bajillion laps around the basketball court at Tussey View Park as I attempted to learn to manual. (No, I haven’t yet succeeded. No, I don’t want advice. I’ve learned my lesson about posting skills work on Instagram before it’s effing flawless.)


This fall has definitely been a weird one. I knew quite a while before my late-summer enduro races wrapped up that this would be the first fall since 2005 that where I wouldn’t even pretend to have a cyclocross season. The last fall that I didn’t pretend to have a cyclocross season was the fall when I pretended like I was going to do an Ironman. I never quite made it to the start line, and I got my first mountain bike a few weeks, so that was the end of that.

Although I still planned on racing the Raven Enduro and Sly Fox Cross in November, hitting mid-September with the knowledge that I would not have a race where I actually cared about the results for many, many months was a strange and welcome sensation. I deeply identified with Syd Schulz’ post “I Haven’t Ridden My Bike in a Month” that came out around this period, even though still technically putting my butt on a bike seat on a semi-regular basis. On one hand, I really wanted to use the time between September and November to get a head start on my skills for next season, but at the same time I was enjoying the lack of urgency. Like Syd, my desire to ride was solidly rooted in FOMO.

September and October also turned out to be two of the most incredibly stressful work months that I’ve had since moving to State College. This also contributed to my long break from “being a good athlete” as Frank and I jokingly called it. When one area of your life is being extra stressful and sucky, it is nice to at least be able to toss out any expectations in other parts of your life without feeling bad about it. Yeah, I might have made a bit more skills progress this fall without all of the stress, but #winteriscoming and I would have been rusty in the spring, anyway. Now everything’s starting to return to normalcy, so I’m just focusing on getting my body and mind ready to come out swinging after the spring thaw and try and make some gains then. 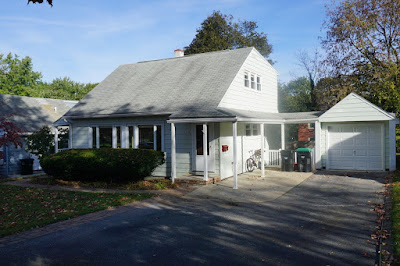 To further add to the weirdness, Frank and I went casually browsing houses on Zillow to actually putting in an offer on one within a week’s time. He became a full-time lecturer (with a recent title change to “Assistant Teaching Professor”) this semester, so we had come to the conclusion that we would be staying in State College indefinitely and that we should probably buy a house before our lease ended in August. We were planning on waiting until closer to August, but a nice place within our price range came up not too far from where we currently live so we jumped on it. So for all of the extra weirdness that added, it will be nice go into winter training in a permanent residence with a finished basement where we do trainer intervals and RipRow.


Finally, with the knowledge that we’ll soon have to start adulting harder than we have been in our relatively cheap apartment the last few years, Frank and I both went ahead and got new enduro bikes after the season ended. He got a Cannondale Jekyll, and I built up a “bastard Stumpy” that I have named Jon Flow (haha, get it?). I’d been lusting after the teal, pink, and neon yellow S Works frame since it came out last winter. However, being S Works, it was too expensive even at dealer cost when it was first released and there were only a couple available in each size.

At the same time, I ended up riding my Liv Hail way more this year than I ever expected to when I bought it on the premise of big bike curiosity in February. It turns out that I like big bike and I cannot lie, but I was wishing for something that pedaled better than my Hail, which is super burly and had no sort of lock-out or pedal setting on the rear shock. It was fully squish all of the time. At different times I considered replacing it with a Roubion or a nicer Hail, but then the S Works Stumpjumper frame went on closeout. It wasn’t quite designed to a full enduro bike, but that’s where the “bastard” part came in. Mine is a size medium frame to be longer, a 160mm fork to slack it out and add extra travel in the front, and we’ll be adding an offset bushing soon to take to 66-degree head angle instead of the original 67. The result is a bike that handles a lot like my Hail, but is significantly lighter and pedals much more efficiently. Oh, and it’s super-duper, amazingly pretty.

So that’s what I’ve been doing the last few weeks. I guess I’ll have “race reports” the next couple of weeks with the Raven and Sly Fox, so maybe it’s time to start trying to be a good blogger again along with trying to be a “good athlete”.
Posted by Lindsay Hall-Stec at 5:22 PM No comments: