Now payback is a bad bitch
And baby, I'm the baddest
You forkin' with a savage
Can't have this, can't have this (ah)
And it'd be nice of me to take it easy on ya, but nah


While my brain scrolled through plenty of depressing lyrics that could have been applied to this year’s Raven Enduro post, instead I gravitated towards the ones that are usually reserved for my internal monologue when I take back a QOM. That’s mostly because I don’t want to waste any more time feeling bad about that race than I already have.

What was always a pretty physically difficult race was made even more difficult, although admittedly a better quality race, by the addition of a fourth stage on the SMCC property, for a total of six stages. The stats of ~15 miles and ~2800 feet of climbing actually sound pretty reasonable in regard to most of my training rides, but the rub is that this included very little gravel road. Most of the climbing took place on steep, often rocky, double or singletrack that was soft and lacking traction, so it felt roughly twice as hard as the equivalent amount of climbing on gravel roads would be.

As I have mentioned a few times already, I was never great physical shape at any point this year, and that has only been made worse since it got too dark to mountain bike after work. Simply completing the race was a gargantuan physical effort for me to the point that, for the last two stages, I was basically just falling all over myself because I was too tired make my bike do the things that I needed to do. Additionally, I had issues with numb hands, my dropper post not working correctly, and the well-worn cleats on my shoes unclipping with the slightest of bumps. Basically nothing worked in my favor yesterday, and I ended up in last place by what I might be tempted to call an unacceptable margin. The problem with that would be that the margin was what it was, so it would be futile not to accept it.

For the last two years, the Raven Enduro has left me ending the season feeling like garbage regarding my abilities as an enduro racer. While the garbage feeling did eventually open the door for valuable insights that helped me get better the following season, this year I’m wondering if I can’t just skip the garbage feeling and move on to the part where I get better next season. Maybe it’s Syd Schulz’ blog posts continuing to hold up a crystal clear mirror for self-reflection or the 2905 minutes that I’ve meditated since the last Raven Enduro, but I’ve finally come to the realization that hating where you are now doesn’t help you get where you want to be any faster, at least not in any meaningful or sustainable way. Even more disappointing, hating people who are seemingly getting there faster than you also doesn’t help.

So, sorry, I’m not sorry about my race yesterday. I’m well aware of what I need to do to be better next season, so I’m going to worry about that now.
Posted by Lindsay Hall-Stec at 4:58 PM No comments:

This past weekend Frank and I returned to Thunder Mountain after visiting it on the final day of our bike park trip in August. Despite the fact that it rained all day when we were there the first time, it was still our favorite park of the trip and we wanted to go back in the hope of better weather. We got our wish, as we had two days of 65 degrees and mostly sunny riding.

Because it was raining the first time we visited Thunder, the black trails seemed extremely difficult, and we didn’t even mess with the double blacks. There are two top-to-bottom single-black runs and a few different black segments that you can link up between blue trails. When we were there in August, we did a single-black trail called Winetree that was incredibly hard under those conditions. It was still incredibly hard under the only slightly damp conditions this weekend. A couple of the shorter black trails, Behind the Shack and Thunder Cliffs, proved to be of similar difficulty even without the rain.

However, we found Old Blend and Billy Badger to be much easier than our last visit, so much so that we ended up doing three laps of Billy Badger on the first day. As I described it to Frank, the trail rides the perfect line where I can clean everything, but it’s hard enough that I feel cool doing it. We stayed so long the first day that we got the perfect opportunity to sweep Hawleywood, the double-black jump trail as the park was shutting down. We knew everything on the trail was rollable but well beyond our jumping capabilities, so it was nice to be able to just roll through and look at everything without worrying about being in the way of more proficient jumpers. 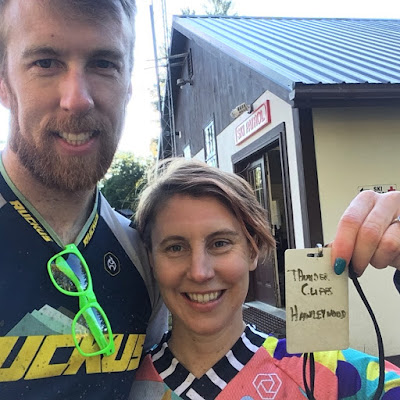 Despite being a bit intimidated by Winetree on the first day, I still wanted to check Juggernaut, the other top-to-bottom single-black, on the second day. It turned out to be much more manageable than Winetree, being more just steep instead of filled with semi-treacherous rock and roots features. This gave us the confidence to try The Schist, which is the downhill race trail. The Schist is actually just steep, which we are definitely cool with after all of our Rothrock riding, so it was actually easier to us than Winetree or Juggernaut, despite its double-black rating. Since that went well, we went ahead and did the other double-black, Too Easy, which basically just runs straight down the mountain parallel to the lift. I think it’s supposed to be the “official” hardest trail in the park, and it does not seem to get ridden a whole lot. We admittedly walked several sections that were extremely steep and loose, but I still think it is easier than Winetree. Can you tell that I’m still afraid of Winetree?


Trying to look cool on social media is hard. The first video, “Too Easy” is the official “hardest” trail at Thunder Mountain. While I’ll attest that there are at least two single black trails that are harder, the video makes it look like nothing. #myskillsarentinstagrammable
A post shared by Lindsay Hall-Stec (@slowpoke2320) on Sep 30, 2018 at 4:10pm PDT

After two days riding there, I still have to say that Thunder Mountain is my favorite bike park. I laughed a bit on the way home because I was so excited to have ridden “all” of the trails this trip, but then I realized that we technically haven’t, because we’ve never actually done the green trail the whole way from the top to the bottom. Double-blacks on trail bikes and no greens - that’s just how we roll.

Now that we’ve scratched the Thunder Mountain itch, I think we might be done with bike parks for the year. We could still try to sneak in some laps the last couple of weekends of October, and technically, Thunder is open all the way up to my birthday, November 12, if we were up for another six-hour trip.  We’ve travelled a ton this season, though, and I think I’m ready to put my FOMO on shelf for a few months and enjoy staying in State College with my cats and my own bed. Last year we did 7 bike park days across 3 different parks, as well as 8 races. This year we jumped up to 17 bike park days across 10 different parks, as well as 8 races, and we never even made it to Bryce and Massanutten. That’s a lot of early mornings, strange beds, hours in the car, and asking other people had to feed our cats. It was super fun, and we learned a lot, but it was also pretty tiring.

We started easing into the off-season shortly after the WV Enduro finale in Snowshoe, since it starts getting too dark for mid-week mountain biking in September. We replaced those rides by starting the MTB Strong training plan in hopes becoming fitter, better athletes next season, although our compliance has so far has left a bit to be desired. We still have one race left, which is next weekend, but since it’s in State College, it won’t require the amount of logistical effort that most races do. Then it won’t be long before the 2019 race schedules start to be posted, and I can start thinking of new and exciting ways to exhaust myself next season!
Posted by Lindsay Hall-Stec at 3:27 PM 1 comment: