Sly Fox Cross: The View From The Cheap Seats

This field ain't big, this field ain't small.
It's a little of both they say.
Our Cat Squad may be minor league, but at least it's triple A.
We battle through the turns, behind the brewery wall.
We can make a race all by ourselves.
No ref, we didn’t take hand-ups at all.

They brew their beer with Belgian yeast.
We bake our cookies egg-free, no gel’tin.
That race director, what’s his name?
Well we can't even spell it.
We don't worry about our upgrade points.
We just hit the run-up and dig deep.
There's nothing like the view from the cheap seats.

As we drove to Sly Fox Cross on Sunday morning, I thought through my race strategy based on what I learned during my two minutes of racing at the previous year’s addition. Most importantly, don’t put your foot directly on the log stairs if they are damp. You’re gonna have a bad time.

The worst part of that lesson is that up until that point, Sly Fox 2014 was looking to be my best race of the season. Thanks to a decent start and a technical course, I hit that log stair somewhere in 6-8th place and was feeling like I might actually be able to hold that. Still there were things that could have been better. I’d gotten the last front-row starting space on the far left before a short road sprint into a hard right turn. I hadn’t been well positioned for the turn and was caught further back than was ideal in the long series turns that made for wheel-to-wheel riding for quite some time. Eventually the girl in front of me ran into the tape and a gap formed to the rest of the field. I sprinted to catch up and bombed into the woods before falling and smashing my face on my stem during the first run-up, so I never got to find out how that one would have ended. The second most important lesson I learned about Sly Fox was that your position into the first turn is HUGE, and I thought hard about how to maximize that in 2015.

Then it occurred to me how great it was that I was even able to engage in this kind of thinking at all. Having raced most of the PACX courses last year, I was able to plan a strategy and even a Plan B for most of the races. While this is the tenth cyclocross season in which I have raced in some capacity, I hadn’t spent a lot of time in the scrum until last season. You know, because Philly girls don’t give up and all, but also because I was neither fast enough to ride off the front and stay out of trouble but still too fast to make falling off the back and giving up acceptable. Now I realize that I’m starting to be a better racer because I’m actually having to race in the middle with, you know, people around me.

On that note, I arrived at the course to find that road section had been more than doubled, followed by a long, straight woods section and another little bit of pavement before the twisty turnys kicked in. This would make both starting position and holeshot position matter a lot less, because everything would string out a bit more before the first grass section and there would be places to pass before the very twisty section. 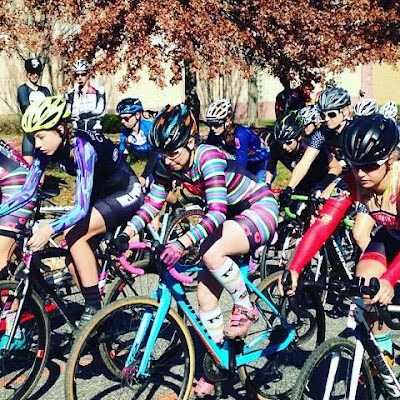 My starting position was better this year, but that did not help my holeshot position at all. Thanks to the beauty of Strava, I learned that the “Sly Fox #critzone” was a 0.2 miles long with a 2% uphill grade, and with the exception of the initial starting sprint, was taking about a minute out of each 8.5 minute lap for me. That is to say that, for the most technical course of the series, 12.5% of the course reeeeeally did not suit my strengths at all, and it was that part that would determine my position for the rest of the course.

I did my best, clipping in quickly and standing for a few pedals strokes, and then sitting down to settle in only to realize the field was coming around me like a great food. I stood and sprinted again to no avail before sitting back down and helplessly spinning my way to the grass. In what’s beginning to be our usual Laser Cat confluence, I could hear Roz and Michaela’s voices behind me as we took our places in the train through the woods and tried to avoid the pile-ups.

This is where my hard-learned patience came in handy. In the past I probably would have been getting upset not being able to ride cleanly through the features of the first lap, but I’ve learned that if you don’t have the legs to get to the front, it’s best to take it kind of easy and keep your eyes peeled for trouble brewing ahead. By doing this, I was able to save energy by not sprinting into something where I was just going to have stop, and could give the congestion just enough time to break up so that I could ride around it. For the amount of pile-ups that happened on the course yesterday, I barely even had to put my foot down anywhere that wasn’t an official forced dismount. I think this ended up keeping me a lot fresher for when the course did start to clear. 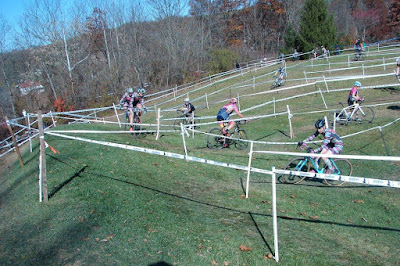 It took about three laps of Laser Cat intersquad battle and moving up through the 45+ field before I finally rode off on my own with two to go. I ended up with 16th out of 32, so another top 50% finish was accomplished. Of course, now that I’ve done it two weeks in a row, I want more. Top 30%, maybe? While I wish I had the watts to be closer to the front of the pack this season, I’m really starting to appreciate the lessons learned from mid-pack, especially with the company that my candy-striped compatriots have provided. While it may not cost any less race mid-pack in the PACX women’s 3/4 field, and there’s no chance of winning back your money, perhaps it’s still a great value for other reasons.

(Since today’s song selection is a little more obscure Taylor Swift's lesser hits, if you want to know what I’m talking about, click here.)

Posted by Lindsay Hall-Stec at 2:51 PM