My Boyfriend's a Wizard

This week's post is going to be a quickie, mostly just to keep up the Monday Internet accountability thing. I've been working on something more substantial in my head for a couple of weeks now, so hopefully I will get it written out and published later in the week.

My training week had ups and downs, figuratively and literally. The figurative and literal up was that I graduated to climbing both sides of the mountain on Tuesday instead of just going up the close side and back down. I'm feeling strangely confident in my road climbing skills, which is supposed to be my weakness. At the same time, the mountain bike ride that I was able to sneak away for on Saturday morning was a disappointment. I continue to see very little improvement in my off-road riding. Basically, it feels less awful than it did a month ago, but my speed still isn't improving much.

Of course, the big event of the weekend was Frank's graduation. He really, really has a Ph.d. now, as well as the wizard costume to prove it. His parents were here for the whole weekend, so hanging out with them took priority over riding, although my snuck-in mountain bike ride on Saturday morning mostly garnered him some heckles from his dad about my being a more dedicated rider than him. Oh well, he's a better son.

Anyway, it was nice getting to spend time with them and get to know them better. And, of course, I'm super proud of Frank for what he's accomplished. Now it's time to begin in earnest his year of post-doc teaching while we wait to see what the future holds. It's also almost time to distract ourselves with some 'cross racing while we wait. We will be kicking off our season next Sunday at THE International Intergalactic Global Open Cyclocross Team Relay Championship of the Multi-Friggin-Verse. I hope it's less bloody than my relay cross experience in Chicago last summer! 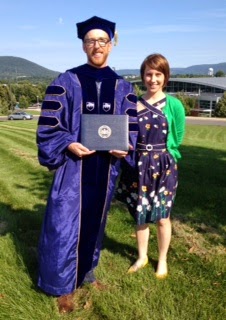 Posted by Lindsay Hall-Stec at 5:18 PM