Something a Little Different

This weekend I actually managed to put my plan of showing up at my next race ready to race and figure out *something* that I could do well.  Circumstances were in my favor on Saturday, as the penultimate race of the ICX series at Major Taylor Velodrome once again had a strong collegiate race showing. Since all levels of collegiate women started in our wave, I had plenty of ability-appropriate competition.

The start was still not that awesome as we dumped into a long section of flat, swoopy grass with three large peanut butter mud bog sections.  I spent most of the first pass through losing positions, but when we transitioned to other side of the bipolar course, I was able to plug the leak and start moving up again.  In stark contrast to the grass crit on one side, you crossed the pavement and climbed up the big grinding hill behind the stands, which wasn't used in either of the MTV races that I did last year.  My secret-weapon 11-32 cassette served me well, and I was able to knock out a tidy rhythm up the hill while my competition was forced into awkward out-of-the-saddle mashing. This was followed by some tricky off-camber maneuvering and a twisty decent back down the hill.  Obviously, that half of the course suited me better.

I quickly made the goal of picking off three girls before the race was over.  Strangely, most of the ground that I made up after the first lap happened in the field section where I forced myself to scoot to the edge of my saddle, stick my tongue out, and mash through the bumps and the mud.  By the last pass through the field, I had accomplished my goal by picking off three Marion girls was looking up to see if I could find one more victim.  To my astonishment, I could see my teammate Val not *that* far around the next turn.  It was the closest I've been to her that late in the race, and I put in one last hard surge in an attempt to close.  It wasn't successful, but later the results revealed that I had finished closer to both Val and Rebecca, my two nemeses from last year's ICX series, than I ever had before.  It felt awesome to go out and really turn myself inside out again and actually see some return for my efforts. 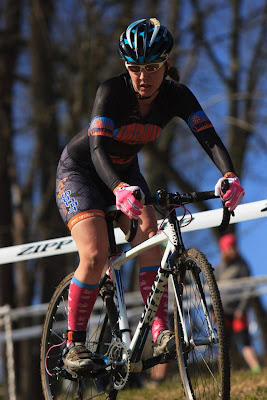 At Sunday's OVCX race in Lexington, I was determined to match my effort from the day before.  This was a little harder, because the remote location made for a sparse field, and I knew that the chances of my having  many girls within striking distance was slim.  I still did my best, and even though I found myself entering the second lap in a battle for not-last place, I still stayed on the gas and was determined to fight until the end.  My slump really started at BloomingCross, where I basically showed up to the race not feeling up to the task and very early on decided that the fight for not last wasn't worth it.  I admit that it is still pretty taxing on the soul to work so hard for so little, but I decided to at least put myself out there again on Sunday.  Unfortunately, after going blow for blow with Emily Falk the entire race, it came down to a sprint on the paved finish and she prevailed.  So I was left with another DFL, but at least I raced for it this time.

So I'm down to four races left this season, and I just wan'cross, I've decided to jump into the Gravel Grovel.  I haven't done 60+ miles even on pavement since training camp in April, so it will definitely be a challenge.  I guess I'm just in the mood for something a little masochistic, I guess.  No matter how it turns out it should at least be fun/interesting/painful.
Posted by Lindsay Hall-Stec at 6:00 PM

I'm impressed you are doing the Gravel Grovel - I thought fleetingly about it, but then that thought went right out of my mind until you posted you were doing it! LOL - Next year for sure! I am trying to talk myself into thinking about doing Death March!

Great job Saturday! I was sad I had to work! I did get a nice MTB ride in at Fort Ben that morning!

Yep, the secret is an Sram Apex derailleur. It's designed to get weekend warriors up the hills on charity rides without having to resort to a triple, but when one came on my road bike, I quickly found a much better use for it.