Back in the summer when I was dreading the BCSP DINO race, I joked that I was going to replace the "Die Biting the Throat" sticker on the top tube of my mountain bike with one that said "Winter is Coming".  I think those are appropriate words for House Rodkey, considering that no matter what season it is, it's always almost cyclocross season.  Except maybe for right now, when it's almost the end of cyclocross season, and so far winter has yet to really peek out at us.  Janelle and I were just discussing last weekend how we might not get to use our "cyclocross pajamas" (aka thermal skinsuits), but even with the surprisingly sunny season that we've had so far, December 'cross is it's own thing.  We've still got three weeks and four chances to break out the fuzzy stuff.

This weekend was a break in both the cyclocross calendar and the mild weather, and it provided evidence that winter, yes, for-real winter, is coming.  You know, that January and February stuff that we pretend isn't happening until it's upon us?  For better or worse, I decided to go ahead and face winter this weekend by participating the Sub-9 Gravel Grovel.

I guess I wanted to prove to myself that my HTFU switch still worked, since my lack of endurance racing (and endurance training) the last couple of years has left it dormant for quite some time.  I also know that the impending winter will also bring team recon rides for the Death March, and I don't want to be such a weak link as I was last year.  So I figured I should at least make it through the distance of a slightly longer and harder ride by myself and let the shock wear off before I add the pressure of trying to keep up with my male teammates.  Without a big spring trip to the Ouachita Challenge like I had for a few years, I think my winter training goals are focused more on proving myself a worthwhile Wheel(wo)man at the Death March and spring training camp than any individual spring races. 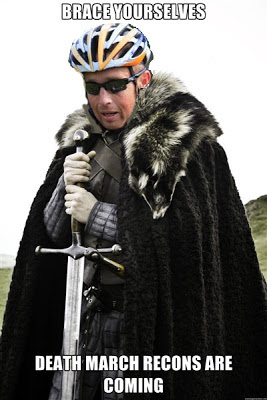 Anyway, the Gravel Grovel went pretty well.  It was a shock to break out my full winter gear for the first time this season, since it was upper 20's at the start and never really got past the low-to-mid 30's throughout the day.  Although I was dressed for the occasion, it was still a little rough dealing with those temperatures for that long when I hadn't experienced them in so many months.  Brain freeze on downhills and frozen water bottles aren't things to which I'm acclimated at the moment.

Making it through the race was about as hard as I expected it to be but no worse.  I did briefly consider looking into bailout options about halfway through, but I knew I had to kept going.  Overall, I did pretty well at just keeping the legs going and keeping my mind on happy thoughts beyond how many hours of riding I had left.  My time wasn't that great, but that's not surprising as steady-state pedaling efforts are not my forte, especially when I've completely not been training for them.  Overall, I was just happy that I got out and did it.  Maybe winter won't be so bad after all.
Posted by Lindsay Hall-Stec at 12:40 PM

Haha that picture is fab!

Reading all these cx reports is making me seriously consider a cx bike......odd because I hate winter and want to hibernate!

At least your bike didn't break you down in Story this year! Thanks for coming and hope you feel better. See you at the Death March!

Nice meeting you on Saturday and good job on knocking down the GG. Good luck with the remainder of cross season.

Wish I'd had a chance to chat with you. Not sure why I didn't. Good on you for doing the 62! 25 was all I had in me and proved I have a lot of riding to do this winter.

Hope to see you at John Bryan!