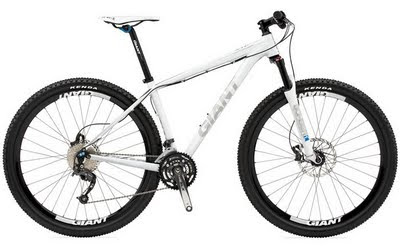 I'm not sure exactly when or how it happened. Just a few short months ago I was totally convinced that my little silver Anthem was all the bike I needed, unless of course, I won the lottery and replaced it with a similar carbon-fiber dream. However, at some point in the season that I started to feel like my bike was a little too heavy and inefficient. Sure, I could have been projecting my true feelings about myself or it could just be the two year itch, but I began to think about getting the Anthem a friend. A hard-tail friend.
Then came Velonew's proclamation that the 26-inch hard-tail is dead. Because I believe everything I read and jump on every cycling-related bandwagon possible, I knew I had to heed their advice like my entire bike-racing future depended on it.
Included in the article is Adam Craig's sweet, sweet Anthem-X SL, which Giant is not producing in my size. I realize that it may be a smart business decision on their part, as the respective markets of mountain bike racers under 5'6" and mountain bike racers who can afford $8000 bike are both relatively small. I'm sure the number of riders who fit both of those categories is tiny, but it's disappointing to know that I can't get one, even if I do win the lottery. Perhaps for one-meellion dollars they would make one in my size.
However, included in the great proclamation is the fact that 29'ers are not just for tall people. Thank goodness that us shorties (or slightly below average-ies of the female gender) aren't going to be stuck riding around on dead bikes, right?
Okay, so all of this aside, I still don't know the exact root of my 29'er craving. I think it may have begun with a fantasy of getting a new Ellsworth carbon-fiber hard-tail, with the pretty paisley paint-job that is on the Velo-Bella pro 'cross team's bikes. At one point, it was indicated that the color scheme would be available for other Ellsworth models, but that does not seem to be the case. Regardless, I got to check out a demo bike at the Cincinnati UCI weekend, and the smallest size is still way too big and it's more expensive than I was expecting. What can I say? I'm spoiled to unsurpassed value offered in Giant's non-$8000 bikes.
I was about to resign myself to getting the Anthem some nicer wheels and calling it good, but just a few days later I found myself in Pisgah and participating in various 29'er related talk to with Arkansas peeps. Specifically, Todd, of OC lantern-rouge lead out train fame and a fellow Jason Hillimire coaching client, broached the subject while we were washing bikes after one of the stages. He said, "I'm going to tell you what Jason isn't telling you: you need to switch to big wheels."
I suspect that if I'd ever asked Jason his opinion on the size of my wheels, he would have shared that information, but mostly he's concerned about the fact my wheels still have tubes in them, regardless of size. I've only had two off-road flats four years of mountain biking, so I'm kind of old-school in my attachment to tubes. I'm sort of superstitious about not messing with a good thing, even if it means a little more weight and a few more psi's. I'm sure I'll get over it some day, just not right now.
Despite coming home and trying to dismiss the events of mid-October 2009, I began compulsively looking up 29'er specs. Giant's smallest size was listed at as 16-inches, and I normally ride a 14.5. However, with some research I discovered that none of the brands I looked at make anything smaller than 15.5. Combined with the fairly frequent comments of "so and so rides a 29'er and she's shorter than you", I inspected the Giant geometry a bit more closely. Turns out that aside from the seat tube length, the Small 29'er was very similar to my current bike, but the front triangle could actually hold a water bottle. Score!!!
Anyway, Adam brought home a demo bike from an Bicycle Garage Indianapolis where a couple of his friends work (BikeSmith's doesn't have demo bikes), and I got to ride it around the neighborhood a bit. The proportions looked silly, and the un-shortened handlebars were awkward, but it felt good and that nice pedal=instant forward motion feeling I've hear people talk about but never really experienced. I even caught myself standing to accelerate up the hill behind my house and realized that I was experiencing zero bounce.
So I'm saving up my dollars in hopes of getting the pretty white Alliance (part carbon/part aluminum) model listed above. I think it will look awesome with pink Jagwire cable housing (Adam's favorite bike-pimping accessory) and one of the white Fizik Vitesse saddles with the pink thigh pads. To sweeten the deal, it comes with special wheels that are designed to run 20 psi, even with the darned old tubes. Corner well and not get flats? I'm there.

I'm hoping it will make the gravel sections of the Ouachita Challenge a lot more pleasant, and I only wish I could have it for Friday's Gravel Grovel.
Posted by Lindsay Hall-Stec at 4:36 PM

Funny, I am obsessing over getting a 29er too. I am an engineering geek and I need to wrap my little mind around how the 29” wheel’s decreased angle of attack, greater gyroscopic effect, and longer contact patch makes up for the 3 or so extra pounds it costs. Everyone who ones a 29er won’t shut up about how much they like it. I was the last kid on the block to give up their cantilever brakes so what do I know.

Have you given up your tubes yet?

Sigh...I don't get why everyone hates tubes. They work fine. My friends make fun of my tubes like I am some clueless ludwig then act like I should care when their tubless tires burp air and they have this really baffeled look on their face. The best part about the (excellent) movie "Race Across The Sky" was when Lance had no idea what to do about his tubless flat tire. Oops, I sound bitter.

YAY for 29ers. I'm going to back to mine next year. The Scalpel is a SUPER bike, but I LOVE my big wheels more. I've been riding my GF Paragon 1/2 of this year b/c I couldn't give it up.

The Anthem inefficient?! You must have ridden a different one than me. =) Heavyish I might agree with; my 0 was 25 on the nose once we put on the bottle cage, some Wellgo magnesium flat pedals, and a small seat pack. Of course it *IS* an XL so that may have something to do with it. =)

All that said, it appears that the 29er is here to stay. I've done a few short rides on them and they do seem a bit smoother on the trail. No serious rides though, so I can't say for certain if they are for me...

Ha, ha, I was riding a different one than you. Same frame, but the the parts on the 0 are tons nicer. My XS women's model weighs 27 pounds by the highly scientific bathroom scale method. So I could probably get it 24 if I spent 29'er fund on nicer wheels and parts, but I think it is the urge to try something different as much as anything. So essentially I will end up with two Deore-equipped bikes instead of one nicer one. Variety is the spice of life and all.

Yeah, Sarah mentioned that the parts spec was probably very different; I didn't even consider that.

Different is good, and who knows you may even like the 29er so much that you go to it exclusively. I've known several people that sing their praises (Todd being one of them) so there has gotta be something to it.

Coincidentally my riding partner just bought a Giant 29er yesterday (blog to follow). He is going on and on about how much he loves it, like it is some type of perpetual motion machine that climbs hills all by itself. And he had a very light full XTR carbon fiber XTC hardtail before. He suggested I start carbo loading before I ride with him this weekend. Whatever.