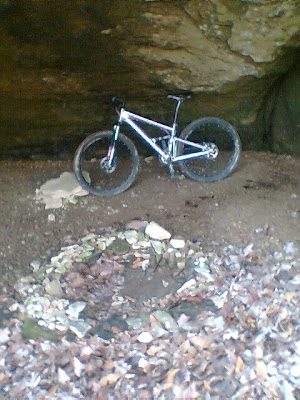 Forgive me, Anthem, though I haven't actually sinned. It's been three weeks since my last bike ride, but only because that's what my training plan said to do. Of course, my training plan said today was a day off, but it was 70 degrees and sunny and my coach okayed what was likely my last chance to check out the new French Lick Resort trail before winter sets in.

Yeah, so I haven't been on the bike since Pisgah. I knew even before the race started I that I NEEDED to be done for the season once it was over. I asked for seven days off and I got two weeks. Last week was my first week of 2010 base training, starting with the much tweeted about FasCat off-season strength training plan. So my "base training" started with a bike-free week in the gym, leaving me with a third week off from the bike.

Anyway, today I went to French Lick, since I kept hearing rave reviews of the new trail, and also because it's the venue for a US Cup race next summer. I was glad to see that it was really only 1:10 away from Bloomington, instead of the 1:37 predicted by Google maps. I was also glad to see how swanky the facilities were and how friendly the staff of the adjoining golf course were.

A fellow racer who I know and his girlfriend arrived a few minutes after me, so I was going to ride with them, hoping it would be a nice mellow pace. It wasn't too bad, but it was a little more challenging than I'd hoped for in my first ride after a long break. I did fine for about a half an hour and then a sudden slight increase in the grade of the trail did me in. I can't even explain it. I would say that I bonked, except that I don't think that's possible after 30 minutes of riding with a good breakfast in my stomach. That's definitely how I felt, though. I'm guessing the lack of aerobic activity mixed with a lot of muscle trauma played some sort of nasty trick on my body. (I also did a 5k during my break that left me limping for nearly a week.)

After I slowed way down, I was able to do two more laps and enjoy the scenery, including the nifty cave shown above. Even if riding was a bit of struggle, it was super nice to get one more MTB ride, with bonus shorts and short sleeves, before winter.
Posted by Lindsay Hall-Stec at 6:47 PM