Gravel Grovel: I am Thankful for Mountain Bikes, Half-Bananas, and Neoprene Booties 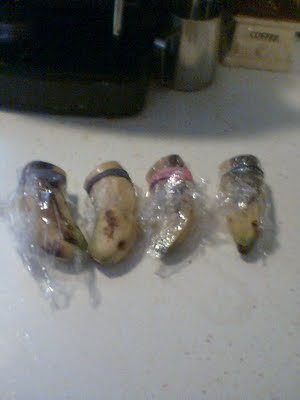 Half-Bananas are prepped and ready to go.
If I learned anything during the past season, it is to show up to every race with the following items: more food and water than I could possibly need, spare wool socks and chemical toe warmers anytime outside of May-August, regardless of the forecast, and a good attitude. The last item is the one I have struggled the most with, so when I was packing for the Gravel Grovel on Friday, I knew it was the most critical item. Of course, given all of the self-supported, "you are responsible for you" hype in the race description, I also stuffed my famous silver Wingnut pack with 50 oz. of water, a spare tube, a Co2 cartridge, a mini pump, a patch kit, four flasks of EFS Liquid Shot, four ready-to-eat half-bananas, and a zip-lock baggy with dry gloves, two pairs of toe warmers (which are good for pretty much all body parts including toes), and spare wool socks. Unfortunately, I didn't have room for the three chocolate chip cookies that I had pilfered from the previous day's Thanksgiving spread. I was pretty much a flask of rum around my neck away from being able to rescue myself and anyone else struggling on the course, given that they also had tiny hands and feet.
As prepared as I was food and equipment-wise, I knew that I was quite underprepared physically, but that is where the good attitude came in. I couldn't have put it so succintly before the race, but after I was done I realized what my "one-sentence" goal had been all along. Basically, I wanted one last opportunity to practice getting into my Ideal Performance State (IPS) before winter. IPS is a term that I picked up from one of the sports psychology books that I've been thumbing through the last couple of months. It is essentially the mental state at which you peform best. One important point is that athletes want to be able to channel this mental state regardless of other conditions, so the fact that I was in far from my ideal physical performance state was actually good chance for me to stretch the boundaries in which I could perform well mentally.
After all of the deliberation, I decided to go with my mountain bike instead of my cross bike. Since I was going to be slow anyway, I decided to go with comfort over speed and it turned out to be a good decision, as conditions were tougher than I had expected.
Things actually started off quite well and I was happy with my mental state in the opening miles. I settled into a hard-but-comfortable tempo and did not worry about the people around me too much. I was near the back, but not at the back, so I was okay with that. There was a steep climb 2-3 miles in and I was kind of disappointed when I had to shift to my granny gear and let a bunch of people pass me, because my weight-lifting trashed legs were loudly communicating their limits for the day. I just had to accept that and move on the best I could.
Luckily, it was not long before the mountain-bikey section of the course, which was a "gated road" that was technically wide enough for a Jeep to go through, but the singletrack going through it made it appear that it had not been traversed by a four-wheeled vehicle in quite some time. It was slick and gross, but after the steep hill in the middle, I was rewarded for riding my mountain bike when railed the downhill while the cross-bikers bumped and slid along. It was exceptionally thrilling, probably because in a mountain bike race you're just supposed to go downhill as fast as you can, but in that situation I was kind of being a show-off. Muah, ha ha ha ha.
That was really the last exciting part of the day, because after the high of Combs Road wore off, I just settled back in my tempo and tried to keep going as fast as I could without pushing my legs over the edge. This kept me in the same position of near the back, but not off the back, and near the halfway point, I was getting a little uncomfortable and struggling with numb thumbs, but was more or less okay. However, at that point, pretty much everyone in my general vincinity on the road decided to take a short-cut back. I wasn't really ready to give up, but I was fairly certain that my positive mental state would disintegrate if I were suddenly stuck in OTB no-man's land by myself for the next 30 miles. I decided that since my goal had more to do with a positive mental state and than a token finish, that I should follow the guys back and finish while I was still having fun.
I didn't have a speed/distance sensor on my bike, but I think we ended up with about 42 miles, which was still a lot more riding than I've done in a few weeks. The event seemed to be quite a success with 115 entries mostly just on word-of-mouth advertising, so I'd really like to try to come back and actually be competitive next year. For now though, I'm happy was that I was able to get in some good mental and physical training.
Posted by Lindsay Hall-Stec at 1:41 PM

Attitude is everything. Great blog!

Great attitude! How do you like the EFS? I've tried the drink mix and like it well enough, but haven't tried the shot yet.

Since I can't really stomach Hammer when riding hard (usually a sustained/heed mix) I've been digging around looking for other stuff to try.

EFS Liquid Shot is the go-to base of my race diet. I don't really do drink mixes, because I don't have a bottle cage, so I just carry a big hydration pack of water. I've got a pretty sensitive stomach, but the Liquid Shot seems to be pretty well tolerated.