I actually chose this title a couple of day ago based on my planned workout, but it's a bit ironic in light of actual events. 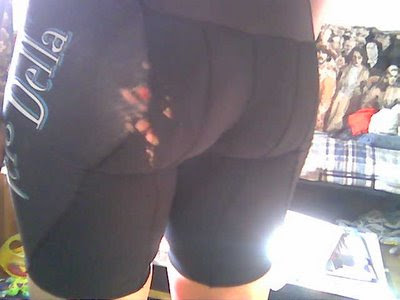 The original reason for the title had to do with the plan to get out of the saddle and sprint my 6 x 15 second efforts all proper-like. The thing is that, in the last three months, I've blown away all of my previous bests for all critical power ranges over 12 seconds. However, my 5, 10, and 12 second bests are still stuck back in October when I last did sprints for cyclocross. Until now, I've resisted the urge to throw in some some unnecessary sprinting just to increase those numbers, which mean practically nothing in endurance racing, anyway. However, when I saw 15 second intervals on my plan, I thought that just once I could put up some vanity numbers.

Talk about a morality lesson. I was in the middle of the first one cranking the pedals and rocking hard. I'd just told myself to "stick out my butt" to try and smooth out, when I felt a jolt and then my bike coming out from under me. All I could think in the deceptively long interval before I actually hit the ground was, "Holy crap, my first road crash." As I hit the ground and started to slide, "This isn't as bad as I thought it would be." As I continued sliding, "Crap, I'm going to tear up my shorts." As I slid to stop, "Okay, this hurts. Can I get up? There's a car coming, so I better."

Only upon getting safely out of the road did I realize that I had just crashed really hard three days before the Lumberjack. Since I was still in the "knocked silly" stage, it was too soon to tell how hurt I actually was. I even seriously considered continuing the workout.

Unfortunately, I have a three-inch radius of pain around my tail bone that allowed me to ride home, but I couldn't get over 90 watts without extreme pain. Now I can't even bend down and pick something off the floor. The good thing is, I don't think there's any bone damage and I'm just crossing my fingers that the pain lets up before Saturday. This is definitely not how I was planning on feeling tonight.

The worst part is, I can't even explain how I crashed. I don't know if I was just cranking too hard and twisted the bars or what. I guess it doesn't really matter, because all I can do now is hope I'm in okay shape by Saturday.

I did set a season best 5 second power, but I don't think that's going to much of a consolation prize if I messed up my first A race of the season to do it.

P.S. Please excuse any spelling or grammar errors. I'm in a lot of pain right now and don't feel like proofreading.
Posted by Lindsay Hall-Stec at 9:00 PM

Yikes, I really do hope you begin feeling better, and pain free, by the time this weekend rolls around. It sucks because it's obvious you've been training for, and looking forward to that race for quite some time =(


Also.. dang girl, at first I thought that photo was mud on your butt or something, but then I saw the tinge of red, and felt a twinge of pain.

Take some drugs man. Saw you are already doing ice and compression.

My mom says drugs are bad for me...

No really, I'm taking all the ibuprofen that the law (or label) allows.

The butt situation is improving rapidly and I should be only be a little worse for the wear on Saturday.