I can only imagine these to be the thoughts of one of the many racers who I have passed during a ‘cross race this season who have then passed me back again…and again, each time I made my move and then started to settle in for the long drive to the finish.

After winning the OVCX Cat 4 series championship in 2011, the couple of demoralizing years in the back of the elite field came as no surprise. It is even less surprising in light of the fact that those two years coincided with some serious life upheaval that resulted in my terribly out-of-shape arrival on the Pennsylvania ‘cross scene last season. I thought that the availability of a 3/4 field in which I could hide would make things easier, but for most of 2014, I wasn’t that much further from the back of the PACX women’s 3/4 field than I had been in the OVCX women’s elite field. After riding much more over the summer this season, I was hoping for better results, but the improvement has been marginal at best.

Now I may be pulling out the cyclocross equivalent of “the sun was in my eyes”, but after one and a half seasons in Pennsylvania, I’m starting to believe that despite what the field size numbers and Cross Results points might say about OVCX vs. PACX, it feels like the Cat 3 and 4 women here are a lot tougher. I’m not sure what the contributing factors are, but it seems that on average girls here are younger, fitter, and more experienced in bike racing or at least bike riding by the time they line up for their first ‘cross race. Sure, you still see the timid newbies on mountain bikes and 35+ moms who jump into the race because their kids and husbands are racing, but they are much smaller percentage of the field than they were OVCX land. Whatever the reasons, it makes it a lot harder for this 35+ cat mom (who incidentally was the 4th oldest woman in the 3/4 field on Sunday; WHAT?!!) to rest on her laurels, because as I’ve said to myself so many times this season, Philly girls don’t give up. 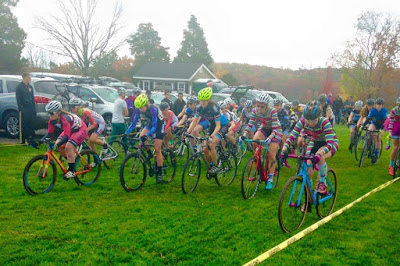 Sunday was my return to racing after a long CX drought. Luckily, the course for “Crossasaurus Awesome” was, in fact, actually awesome. It had lots of twisty, turny stuff, a few little short, steep sections, and set of three little rideable log stairs. Plus, it had rained just enough that morning to be the perfect amount of tacky that even mud-haters love. The added bonus was that it was my first race in my Laser Cats Feline All-Stars kit, and I was really excited about it. It turns out that I had at least once teammate directly in front of or behind me for almost the entire race. This was pretty fun and motivating. 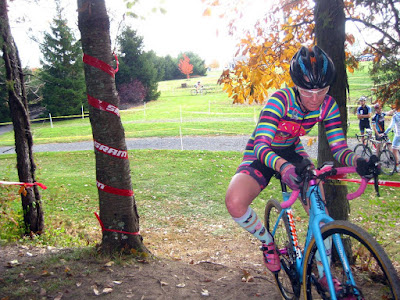 The race went well enough, considering my current state of fitness and my lack of racing of late. I still managed a front-row call-up despite missing the West Chester race for Iron Cross, and I accomplished my goal of getting off the line and up to speed faster than everyone else. I didn’t, however, waste the extra burst of power that it would have taken to actually contest hole shot, knowing that right now I have no business trying to hang with the front of the field. I just wanted to prove that I could still perform a good start, since I haven’t in a while. 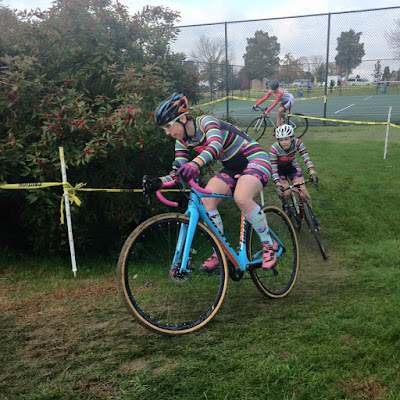 Then it was time to settle in and let things shake out since a good start but bad power meant that I was getting passed a lot for the first half-lap or so. Then things shook out, and I just worked on keeping a steady pace and picking a girl or two off when I could. As I neared the end of the fourth lap, my Garmin was showing nearly 40 minutes, there were no girls ahead in sight, and the ones behind were far enough back that I was confident that I could hold them off until the line.

And I did hold them off to the line. What I hadn’t counted on was that my race wouldn’t be done when I reached the finish line. So far this year, my only race that went to five laps was Quaker City, which was a very short course. This one was very long, so it never occurred to me that we would do five, even as I noticed the Cat 1/2/3 girls still heading to back part of the course as I approached the finish for the fourth time. I guess I thought they would pull us to keep the race on schedule, even though we hadn’t actually been lapped.

When I made the turn and started to wind up for the finish, I was demoralized to see one lap to go. I had just finished my normal last-lap mental bargaining game of “lap time through the bumpy section, last time over the barriers, last time through the sand…”, so “one more time of EVERYTHING” sounded pretty awful.


I was passed by my teammate Michaela as we crossed the line and I let her go as I willed my legs to do another lap. I was passed by another girl in the next straight section, but as she passed I found one last second, third, fourth wind and kept her from really pulling away. I held off any other passes through the rest of the last and kept Michaela and the other girl from gaining too much more ground. In the end, I finished 15th out of 23, and I was okay with that for my first race back. The fifth lap was pretty cruel, and once again I learned the hard lesson of “Philly girls never girls never give up.” It’s a tough lesson, but hopefully it will eventually sink in and make me faster.

I now have six races left in my ‘cross season with Thanksgiving weekend being the only break. The first half of the season hasn’t gone as smoothly hoped, but I guess I just need take inspiration from my teammates and colorful new kit and not give up until it’s over, Philly girl style.
Posted by Lindsay Hall-Stec at 11:39 AM