Since I provided context in yesterday’s post as to my mental and physical state before Nittany Lion Cross on Sunday morning, writing a race report will be much easier.

As one might imagine, I wasn’t feeling too great before the race, but beyond relaying the night’s events to my friend Tanya, I mostly had my mind on the matter at hand. Since I had a fourth-row call-up and the race counted for nothing except the off chance of improving my Cross Results score, the pressure was low enough that the thought of racing didn’t really add any stress for me. I almost welcome the opportunity to take some of my frustration out on the pedals. I had come all that way and spent the night in a hotel, so I might as well get some practice racing out of it.

The night’s rain had created a ginormous mud pit a couple of turns after the start with several-inch thick mud varying from sloppy to peanut butter consistency for a 50 or so meter stretch. The rest of the course was a mix of tacky, squishy, and squirmy.

Tacky: just barely soft so that traction is actually increased

Squishy: soft enough that more pedaling effort is required, but not necessarily detrimental to traction

Squirmy: the point at which mindfulness is required to stay upright in the corners

Sloppy: tires start to sink in and strong effort is required to maintain balance and forward momentum

Traditionally, the more squirmy and sloppy that I can get my tires on in a race, the better I will do. Unfortunately, with the exception of same although much smaller mud bog at last year’s Nittany Lion Cross where the rest of the course was merely tacky, I have not been on any real mud since Gun Club 2013. So disappointingly, I wasn’t as strong in the conditions as I would have hoped. The first lap through the mud bog I was stuck in traffic and had to dismount about halfway through, the second lap I crashed, although I’m not sure how, and the third I made a terrible line choice was stupidly slow despite riding the whole thing. I finally got it together on the last lap, found the good line, and passed a couple of people through that section. As for the squishy and squirmy on the rest of the course, I did fine, but I wasn’t making up loads ground the way that I would expect. 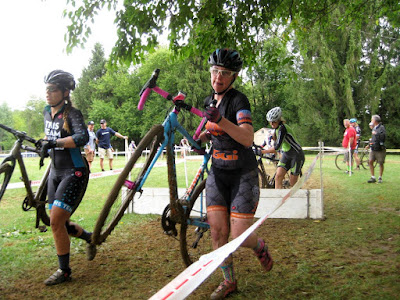 Much like Cross of the Corn, my normal strengths weren’t that strong, but I was stronger at my normal weaknesses. I did have a third-lap slump after relentlessly battling back and forth through a group of girls for two laps, but I recovered, and fourth lap was tied with my second for fastest. The strange thing was that I was actually making up ground in some of the flat, straight sections, especially the long slight downhill coming back from the woods where I would force myself to throw it in the big ring as I exited the last turn and motor all the way to the barriers. 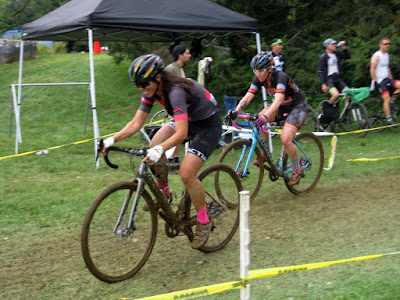 I ended up 40th out of 49, which was disappointing because I was battling with girls the whole time and was never strung back into no man’s land. I basically fell back a group in my third lap slump and was in the last group that was still a group at the end. I guess I’d hoped there were more stragglers behind me.

So despite feeling like I was in much better shape than last year before the season started, my placings have been almost exactly the same so far: one place below the halfway mark at Cross of the Corn and 40th out of 49 at Nittany, which is exactly what I got on Sunday last year. It’s weird because I feel like I’m in better shape and rode better at both races, so maybe the competition is just stronger? I’ve got back-to-back PACX races on hillier and more technical courses than I’ve seen so far this season, so hopefully those will break me out of the rut.

Posted by Lindsay Hall-Stec at 4:07 PM