“The thing is that, while cyclocross is notoriously hard, from the starting line at Apple Cross to the finish line at Kings, going hard had come surprisingly easy.” – Me, 2011

Going into this weekend’s double PACX races, I was reminded of my old post from 2011. Although it’s a little funny thinking of me trying to say anything intelligent on the subject of love back then, as I don’t think I knew the difference between “grit” and “people who beat you when you’re crying don’t count” when it came to relationships at the time, it does seem that in retrospect I was more right than I knew. Since writing that post, I’ve come to dislike the concept of “grit” that is so glorified in the sport of cycling, and realized that the more useful attitude in love, cyclocross, and everything else is to find the right motivation toward the right thing such that doing hard work seems easy. Actively making yourself do what you don’t want to do or feel like you can do is never a good plan.

I thought about this while awaiting the start of the Town Hall Cross race on Saturday morning. I was slated for the front-row start that I had so conscientiously earned at Cross of the Corn. I knew from last year’s race that it would be a long, moderate uphill drag to the big switchback climb, and that as much as it would suck to go full gas up that drag, trying to ride the switchbacks in traffic would be worse. So I lined up with the intellectual intention of turning myself inside out to make it to the switchbacks at the front of the pack, even though I was ultimately predicted to finish 20-something out of 30-something. I was in a bit of a crisis between what I felt like I should do, and what I felt like I was actually capable of doing. That is when I remembered, “If it don’t come easy, you better let it go,” and realized that while I should put my best effort into the race, I shouldn’t overstress myself with a strategy that I didn't feel like I could pull off.

Ultimately, the crisis subconsciously resolved itself. As I clipped in and stood up to start cranking off the line, I leaned to my left and the girl to my left leaned her right. We were both only up to about 2 mph when this occurred, so it was more of an annoying “bump and put a foot down” situation rather than a crash. It did serve to allow pretty much the entire field around me while I got my speed back up. 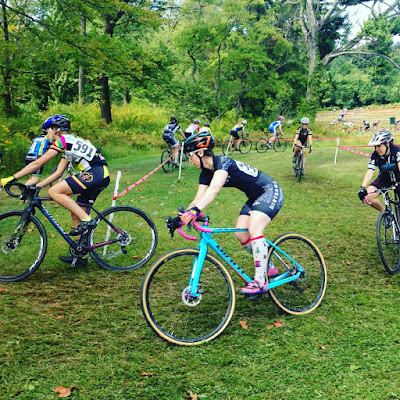 So I found myself climbing the switchbacks in even slower traffic than I did last year, but I solidly picked off girls throughout the first lap. I spent the entire second lap reeling in another and finally passed her near the halfway point of the race. I continued to motor for two laps while I slowly gained ground on the next girl who had a much bigger gap than all of the others, but I never quite managed to get up to her, although I was pretty close at the end.

Even though switchback climbs in cross races are not a thing that I ever would have imagined liking before moving to Pennsylvania, I have kind of enjoyed them in the races in which they’ve made an appearance. Plus, switchback climbs usually mean a big, slightly sketchy bomb back down hill, which usually works in my favor. The Town Hall course also has good amount of off-camber and more technical turning features, so it felt nice to finally start working out my skills on the new TCX and getting my confidence back in that area.

I ended up 19/27, with which I was reasonable satisfied based on the field and my results so far this season. Once again, after looking at last year’s results, I was 19th at last year’s Town Hall, as well, but in that case it was next to last. It's getting a little weird with the whole same places at the same races, despite riding better this year.

I arrived at Quaker City Cross on Sunday morning tired from Saturday's race and a night in a hotel, but with high hopes of a good course and a second race day bump. I’d seen a few pictures of the course on Instagram and thought that some singletrack and #belgiancx sounded like good things for me. It turns out that #belgiancx is code for “bumpy ass field” and the singletrack was less than 10 seconds of riding on a prologue section that we only went over once. Bomp a domp. Frank and I both agreed after our practice lap that it had our new vote for “worst cross course ever” with the slogan “all the boringness of Kutztown with even more bumpiness than Cross of the Corn”.

I started the race with the intention of merely getting through it. Although I tried to go fast at the start, I didn’t have a lot of success or motivation. It was so bumpy that I struggled just to hold my bike steady enough to translate any power that I put down into forward momentum. As we entered the long, bumpy up, down, up of the prologue section, all I could think about was my rattling helmet and how hard it was just to make my bike go at all, much less go fast. 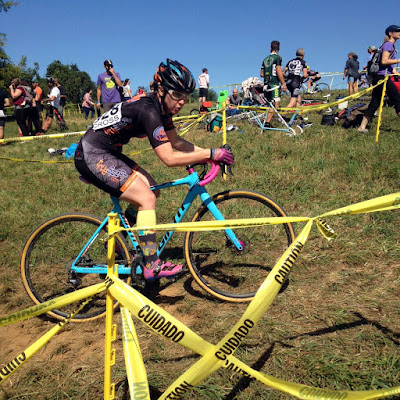 I first started getting my momentum back as we entered the “real” course for the first time by going up a short, steep climb that many girls had to run, but I was able to spin up in relative comfort with my 32. Except for the steep entry and exit of the finish straight, the course was wide and flat on about a 4% grade that we basically just snaked up and down, save a death spiral/pinwheel/whirlybird/funnelcake in the middle. It was all bumpy, but not nearly as bad as the prologue, and halfway through the first lap I was able to sit up for a couple of seconds on a downhill to tighten up my helmet.

This helped my focus enormously. I was able to grit my teeth and hold my ground on the uphill parts of the course and let it go through the downhills and off-camber corners as I slowly began to pick girls off. The second time up the little hill I dispatched four at once as they came to a complete stop trying to remount before the top. It was a little sketchy, but I made it through the slalom still mounted and rode away. I fought hard to the end, only having one girl repeatedly come back that I couldn’t drop and managing to pick off one last 45+ woman in the final uphill of the race. 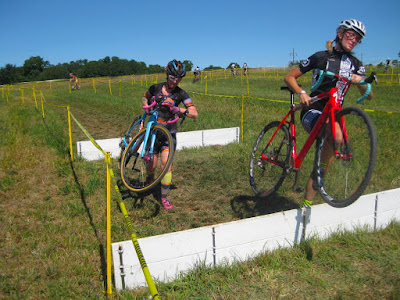 I ended up 10th out of 16, which was just a bit shy of my goal of getting back into the top 50% of the results for the first time since getting my Cat 3 upgrade. I think I was still closer than any other race this season, because I was within 20 seconds of 9th and probably within a minute of 8th. I would say it was pretty good considering how little I was expecting from my performance on that course.

Although I’m disappointed that I’m not doing better this season than I’d hoped, I’m happy that I do seem to be incrementally improving rather than doing worse. This is kind of huge for me, as too often I let a couple of bad races throw me into a downhill slide. The best part about this weekend was that going hard came easy again. At Town Hall I recorded my highest heart rate in at least two years, and had over 13 minutes of anaerobic time vs. about 6 in a normal race where I’m trying pretty hard. Even when I had excuses to give up, I turned myself inside out to beat the girls that I’m currently capable of beating. Sure, I want that population to grow as the season goes on, but at least it’s starting feel like it’s actually doable.

As counterintuitive as it is to the religious tenets of cyclocross, I think that “if it don’t come easy” might actually be good advice. Forcing myself to fight battles that I subconsciously know I can’t win only leads to disaster, but just allowing myself to win the battles that I am capable of winning slowly stretches out those capabilities. So I’m going to keep inching away at this ‘cross season and hopefully we will see some nice surprises in December.

Posted by Lindsay Hall-Stec at 4:49 PM