Cause we're young and we're reckless
We'll take this way too far
It'll leave you breathless
Or with a nasty scar
Got a long list of Cross Results
They'll tell you I'm insane
But I got a blank space, 2015
And I'll write your name

Last week “Fight Song” described how I was feeling about the beginning of ‘cross season, but by the weekend I had returned to my baseline state of, “Cross seems like the best idea in the world on Friday night, and the worst on Sunday morning.” Luckily, I have Taylor Swift’s opus on the nature of cyclocross to remind me to help me find peace in the unpredictability and impermanence of my chosen sport.


Despite my tumbling level of self-confidence the morning before the race, I still did my best to “make an explosion” as I described in my last post. It was a valiant effort, but not meant to be. Instead of sending the 45+ off on the first whistle with the 1/2/3’s, they made a last second decision to put them on the front row of the 3/4 start. This made my plans of being the first one into the turn at the top of the hill a lot more difficult, and missing my pedal at the whistle didn’t help either. I still got off the line really fast and made it to the turn in the top five out of the combined field.


I forgot how much flat, bumpy, open stuff there was before the first corn section, and I lost a few places there. After we exited the corn into a long, straight, slightly downhill drag, the field blew up as expected, which is why I’d hoped to be further up at that point. I tried to catch back up at any place where it was punchy or turny, but the front of the field continued to pull away from me. 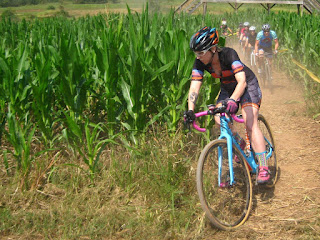 The course was a little more favorable to me than last year, but not a lot. There were still a lot of flat, bumpy sections that favored more powerful riders, and the parts that should have been good for me didn’t seem to help that much. They added a “Snake Alley” section on top of the ridge in the middle of the course that was a series of five or six tight turns back-to-back. I should have been able to make up a time in this section, but I definitely wasn’t gaining anything and was possible even losing a bit of time. I’m not sure if I’m just not used to the new bike yet, or I’m out of practice, but the most frustrating part of yesterday was not being able to leverage my strengths on a course that already doesn’t play to them.


I suppose the upside is that, although my normal strengths failed me, a couple of my normal weaknesses were not so prevalent this year. Maybe it was last year’s spectacular blow-up or an unexpected payoff from my long gravel rides, but even though I couldn’t produce the speed that I wanted early in the race, I was able to hold the speed that I had quite well. I was mentally prepared for five laps, so I still had a bit of what felt like a third lap slump as the girl who I’d been yo-yoing with for the first two laps started to fade in the distance. Then several girls started to come into view at the end of the third lap, and I was shocked when Frank told me that I had one to go. The lap was longer than last year, and I guess they made the decision to cut the elite women short rather than have the slowest riders on the lead lap finish in 48 or so minutes. I was partially happy to have my suffering nearing the end, but I was still holding my pace better than others, and for perhaps the only time in my cyclocross race history, I could have actually benefitted from another lap.

I ended up finishing 7th out of 12, which was a couple of places further back than I’d hoped. I knew ahead of time that the front of the field would be strong, so I wasn’t really expecting a podium unless something miraculous happened, but I was sort of hoping I could make the top 5. I’m trying to tell myself not to read too much into the first race in hot conditions on a course that doesn’t suit me well. I feel like I have fitness, but I just haven’t figured out how to use it yet. Hopefully some more races will help me get used to my bike and get my handling mojo back, and some high intensity mid-week intervals will bring back my pop. If all goes as planned, this will be my longest season ever, and the things that I’m missing are the things that can actually be improved during the season. The thing that I have now is better endurance than ever before, so maybe that will pay off during the meat of the season when I can’t train much.

Posted by Lindsay Hall-Stec at 4:08 PM