Over the past weekend we headed down to Richmond, VA for Guts Gravel Glory. With the amount of gravel that we’ve been riding lately, we thought it would be good to test out our skills against actual people.

The race was the closest thing that I’ve seen to a true “ultra ‘cross” format. There was a sixish-mile loop of double track and horse trails around a state park. It was pretty non-technical with just a few small roots here and there, although the surface was quite sandy and made for tough cornering. Despite the name, there wasn’t a whole lot of gravel on the course; it was mostly sand or packed dirt. All of the categories started together with everyone racing until the overall leader had completed eight laps, so it really was a like a three-hour cross race in that regard.

I had high hopes after looking at last year’s results, although I really had no idea how fast I’d actually go on the unfamiliar course. A 14 mph average seemed reasonable enough with a mere 350 feet of climbing per lap. However, as the women’s registrations started to come in with more Cat 2’s that last year, I wasn’t as confident.

In the end, Cat 2’s were the least of my problems. They had us start in waves with 15 seconds in-between, with a 55 strong Men’s B field starting 15 seconds behind us. There were eight women in the field, ranging from a domestic pro road racer to Cat 4’s. It became apparent at the start that the format was going to play out roadie-style and not so much ‘cross style, which didn’t bode well for me. Even though there was no chance in hell that the group was going to stay together, they still started out that way. I prefer the “break this up as soon as possible” racing style and hate being on anyone’s wheel, especially on questionable terrain, but I knew that going to the front at the beginning of a three-hour race was a terrible idea. 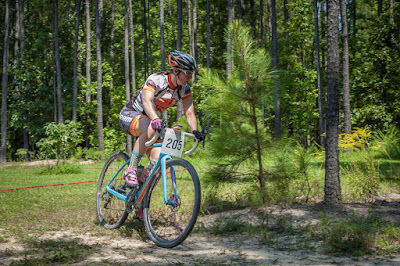 So I did my best to settle into my own rhythm and hoped to catch some of the other girls when they got popped. Unfortunately, the B men swallowed us up immediately upon entry into the woods and by the time things thinned out there were no women to be seen. I had guys from the 20-mile C race to ride with for the first three laps, but once they finished, it was a little tough to accept another 1.5 hours of pushing my shredded quads on alone. I did it, though, and eventually made it through six laps and about 40 miles. I also think I passed a girl who was stopped about a half-lap from the finish, so I think that I technically didn’t get last place. 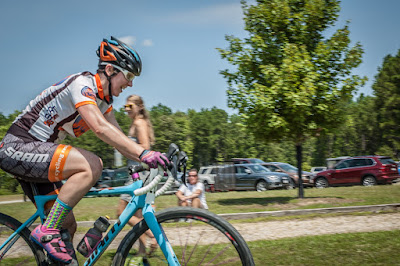 Although I didn’t place as well as I’d hoped, I’m proud of myself for staying on the rivet for three hours straight. My heart rate data showed that of my 3:10 of racing, 3:03 was in Zone 4 or higher. That’s a hell of a lot of threshold. It should make 40 minutes of only slightly higher intensity not seem so bad in a couple of weeks. I can also take heart in the fact that regular ‘cross allows me to go out as hard as I want with no need to sit in, and that even the most pedally ‘cross course will provide more turning and acceleration than this did.

Until then, I plan to make the most of my last couple of weekends of summer by pushing my gravel limits a little further before time to take off the bottle cages and put on the tubular wheels. This weekend I hope tackle both Greenlee and Alan Seeger in one ride, and perhaps explore the Western side of the W101 course the next weekend. Then it will be time for the PACX opener. Eek!

Posted by Lindsay Hall-Stec at 3:14 PM