This weekend produced no notable results, witty insights, or inspiration for song parodies. Really, I think I'll stick to my Facebook assertion that the highlights of my weekend were the Brookville chickens and the "slap bracelet beer coozy", mostly because I can't really figure out the point of either, and yet find them very entertaining.

The chicken encounter was the result of my being a little too relaxed about my Saturday ICX series "opener race", as that is what I usually consider ICX races.  I thought I knew where the exit for Richmond was on the way to Cincinnati, and I forgot to get an actual address to put into the GPS before leaving the house.  This only occurred to me as I was going to pick up Adam's co-worker and our recently recruited teammate, Erik, so bonus points for dragging another person into my mess.  Anyway, I took off in the general direction of Richmond, which was correct in a general direction sense, but definitely not the most efficient route to the race.  We ended up taking quite the scenic route, viewing the rural Indiana scenery, passing up many opportunities to rent canoes, and witnessing the many artistically rendered chicken statues of Brookville, IN.

The race itself was less than blah.  As a result of the detour, we arrived an hour later than planned, and I didn't get a chance to do a practice lap of the course.  Starting cold, I did okay for about one minute before the first rough uphill drag took the wind out of my sails, and the first pass up the run-up did me in not long thereafter.  I basically just rode from that point on, only pausing to complete a couple of stupid one-women crashes.  I still accomplished my goal of getting a hard ride in my legs, and still got second out the two Cat 3 women.  For my efforts, I won a pair of white arm warmers with a bunch of breast cancer logos on them and a "slap bracelet beer coozy", as I called it, which was basically a flat piece of foam with metal bars in it that curled up when you hit it on stuff like the slap bracelets that were all of the rage among my elementary school crowd circa 1990.  It made a fun toy at least. 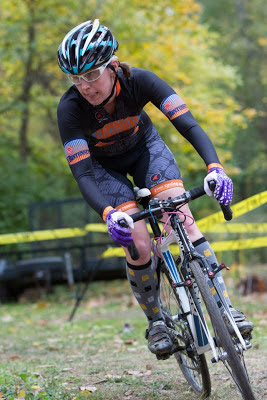 Sunday was the Gun Club.  Yeah, you know, one of the high holy days of the OVCX calendar?  The site of one of my biggest breakthrough races last year?  This year's course was even extra ripe for the taking with lots of twisty, twisty goodness, all of last year's steep spots suddenly reversed and pointed down, and zero barriers.  There was also a sweet Euro flyover, but I would say that was one feature that didn't really play to my advantage.

Unfortunately, I woke up feeling like poopy poopy doodoo and never really got my mojo going.  I faired slightly better than usual, because it seems there a still some Cat 3 girls who got there on power and are still at a disadvantage handling-wise.  I just wasn't able to use that as much as I wanted to because my power disadvantage was also bigger than normal which mostly negated my technical advantage.  In the end, I made a stupid mistake less than a minute from the finish that cost me two places.

So double weekend one of six is complete.  Lets hope my mojo kicks soon.

Oh, yeah.  I also accepted a new job this week, so that will be a interesting change and a little more money to contribute to the track bike fund.  I'm a little nervous about leaving my comfortably uncomfortable current situation, but hopefully I can settle in and start moving back towards just doing my job then going home and focusing on bikes, without the stress and distraction I've been facing for most of the last year.
Posted by Lindsay Hall-Stec at 2:33 PM

Good luck with the new job!

That's a really cool photo, love the look of concentration!