After what seemed like a very long double CX weekend, the logical thing to do is to spend Monday reliving it all by looking at a bajillion Facebook pictures and silly videos, right? In addition to my own blogging, I also volunteered to keep up with the CX coverage for Bloomington VeloNews this season after our esteemed local cycle-razzi Geraint Parry moved back to England last winter. So now I am busy following and photographing the racing exploits of other Bloomington residents in addition to my own. I realize that at least half of my readers come from BVN already, (another 40% are people Googling abdominal scars) but if you want to read what I have to say about other people's races click on over and check it out.

The race course at Brookside on Saturday had a decidedly roadie bias (the course designer would freely admit this intention), so it didn't exactly bode well for my skill set. The field was a little tougher than the one at Fisherman's Park. Before the race I identified a couple of girls who would almost definitely beat me and 3-4 that could go either way. It turned out that 3 of the 4 went the way of beating me, plus another one surprised me. I ended up fourth out of the Cat 4 open and seventh in the wave. I did beat one 35+ women who had beaten me the week before, so that was a positive. Overall, it wasn't an exceptional race for me, but I'd give myself a "meets expectations" on my performance evaluation. 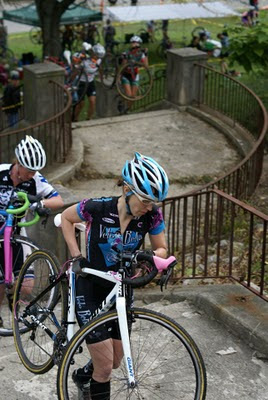 Rain all Saturday night and Sunday made for slick conditions at Ft. Harrison State Park. Although our early race didn't have the epic mudfest conditions of the elite races in the afternoon, the slick turns and sloppy fire road on the back of the course still played to my advantage. I got a good start and stayed with the top three for the better part of the first lap. I then lost contact with them and was eventually passed by one more powerful rider, but I kept it rubber side down for all but one corner and maintained my position for the rest of the race. This left me in third place in the Cat 4 open and a best-ever wave finish of fifth. I managed to beat a couple more good 35+ women from previous races, and even if it doesn't sound as good as "winning" at Fisherman's park, it was probably my best performance so far this season. The girls that got first and second in my category were really strong and racing for the first time this season. Luckily, one was just on a short weekend stopover before her Cat 3 upgrade, so I still feel like I might have a decent chance at winning the series. There's still a long way to go, though. 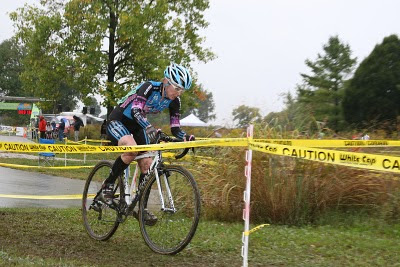 Besides the racing, the best part of the weekend was actually spectating during the muddy elite races. There were a bunch of crazy people handing out money and beer at the barriers. Luckily, someone made this awesome video of the festivities, which is bound to become a classic of "Joey's Okay" proportions.

Posted by Lindsay Hall-Stec at 6:05 PM