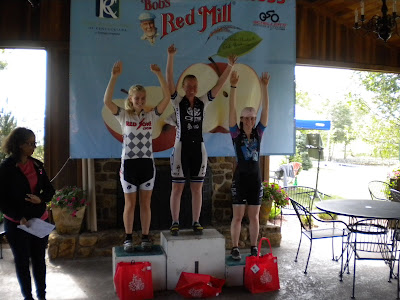 So the test results are in. New wheels: freakin' awesome. Body: meh, pretty good.
I got a good start at Huber's Applecross today. I contended for the hole shot with a girl from Illinois who had won the day before, and when the course narrowed into the first turn I let her take the lead. The pace seemed a little slow through the first part of the course, so I passed her right before the apple orchard section (mmm, rotten apple smell). Unfortunately, I found myself being flung through the air at the exit of the orchard. A closer inspection on the next lap revealed a pretty large hole camouflaged by the grass that I'd failed to notice on my pre-ride.
The cool thing was that while I scrambled to get back on the bike I realized that I gapped the field enough that I almost had time to remount and keep going without losing my lead, but I panicked at bit and didn't move efficiently enough. I tacked onto the back of the lead group and tried to regain my senses, but things got pretty crazy shortly thereafter. There was a weird section where the course appeared to go down a steep off camber hill and then back up. However, it was taped wide enough that I could ride the high side of the downhill and low side of the uphill so that it was more of just a zig zag with a few pedal strokes of climbing. I got caught up behind a lot of traffic in that section and the climb ending in a run-up after it. Some of the 35+ women were catching up at that point and I kind of lost my bearings as to my place in the pack. A couple of crashes in front of me on the gravel-to-grass transition right before the sand pit during the second lap made things even less clear. I just tried to maintain at point.
The middle laps were rough because, even though I'd made up a few places, I'd lost sight of the leaders. I also had a two or three girls following me that I needed to hold off. It's ironic that I just did a blog post on how awesome it is to have people cheering for me during races, because I was getting the complete opposite today. Amongst a Louisville-heavy crowd being pursued by several Louisville girls, I was mostly hearing cheers for my competitors and knowing that they were still in hot pursuit. One finally got around me and started to slip away when I saw the lap board and realized we were in for four laps instead of three. I got close to making the place back during the last lap, but didn't quite make it. When we crossed the finish line, it was announced that we were second and third. At that point I was a little disappointed that I hadn't fought harder for second, but at least I'd made my first real cyclocross podium.
Posted by Lindsay Hall-Stec at 4:18 PM

hey i tried to be that one in the crowd and yell for you instead of the Louisville folks.

Thanks, Nick. I did hear my name a time or two, and I should have mentioned that in my post. I appreciate it.