Sunday was my first 'cross race of the year at Kings CX in Mason, OH. Going into the race I was definitely in "let's see how this goes" mode, since I've only started to get my post-primal legs back since the DINO 6 hour, and last Wednesday was the first 'cross practice that I didn't feel awful. I still didn't feel fast, just not awful.

I tried to sneak out on the course for a lap between the men's 4's race and the 10-12-year-old race. However, I was confused about the course, and a guy showed me where to sneak in after the finish so that I could not interfere with the 4's but wouldn't have to wait until they all cleared the course. We rode together while previewing the course, and when we came to sand pit, I tried to ride through, even though it was very deep sand with no good line. I explained to the guy that coming from a mountain bike background, I feel like I'm more stubborn about trying to ride stuff, even when it might be faster run. Therefore my new MTBer on a CX bike motto: Imma ride it, dammit!

The course was bone dry and and had lots of swoopy bermy turns and I actually found myself whooping a couple of times through my practice lap. It was probably the best mood I've been in before a 'cross race in a long time. I was in my element. However, I didn't realize that they had already taped off the big hill for the juniors' race when I was preriding, so it was kind of a nasty shock during my actual race. My new joke is that the juniors' course at Kings CX is my favorite course (I liked the half-size barriers, too).

I came to line in a jovial mood, it may have worked to my disadvantage because I was a little too relaxed. I was joking around when the whistle blew and had a pretty delayed reaction time clipping in. I also realized that the medium-sized gear that I thought would be appropriate turned out to be too easy and I lost a lot places really fast. I was stuck behind a lot racers during the first swoopy section and was not able to make up the ground there. Then I bobbled the first time up the big hill, because I wasn't prepared and the 38 tooth small ring that New New came with is still kind of difficult for my wussy little legs on some occasions. A bouncy unclipped-in trip downhill and another trip back up left me redlined as I prepared for the first trip through the sand pit. I tried to gather as much speed as I could and thought, "Imma ride it, dammit!", only to bog down about a third of the way through and fall over as I tried to do an emergency dismount. Fail.

After I got up, I composed myself, railed some swoopies, and actually started to do okay. I passed a couple of girls, and battled with another who slower than me in the turns and faster in the straights for the most of the race, but in the end I got to the finish first and almost overtook another girl sprinting to the line. I ended up 8th out of 13 in my age group and 16th out of 27 out of all of the 3/4 women combined. I was still a couple of places short of adding a "Top 50%" to my page on crossresults.com, but I'm pretty sure I've never done better than next-to-last in a CX race so 10th from last is a big improvement. I feel like it might have even been my Bill Brubaker moment, and that I have a good shot at breaking the top half next time out if I just pay attention at the start, kill it on the accelerations, and keep the negative thoughts at bay.

This weekend is the last one without a race until December and I will be spending it my mom, who's coming to visit. I'm excited about hanging out with her, but I'm already counting the days until the Tour de Louisville, where I will get another chance to see if this is the year I really do stop sucking at 'cross. 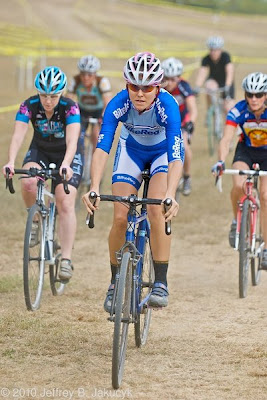 Losing ground. I should really pay more attention at the start. 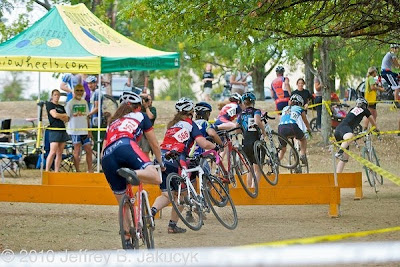 At least my barrier technique is better. 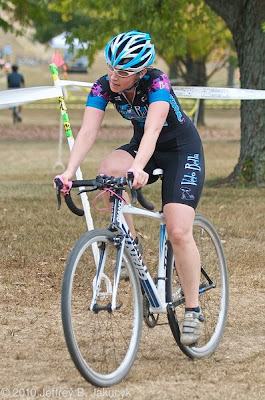 Good report. I would love to try this genre but I cannot justify driving 2-3 hours round trip for a race that doesn't even last 45 minutes.

It *feels* like a lot more than 45 minutes, but I'm not sure if that's adequate justification. 'Cross season is weird and intense with twice as many races as XC in half the number of months.