My last post was incredibly helpful in allowing me to bookend the last couple of months’ stress and anxiety, and transition into the official off-season feeling much more calm and motivated for next year. However, I worried that the post went a little too far down the crazy/anxious/dark end of the spectrum by admitting how much I let my insecurity bleed into pettiness and jealousy sometimes. And maybe it did, but it also prompted an interesting response from an enduro friend that I met over the summer.

He mentioned that I’d implied that guys seem to care less about results than women, which is definitely not something that I ever thought or meant to imply. Without doing any scientific research on the matter, I would guess that the level of caring about results is probably pretty evenly distributed between the genders, but how it is expressed and experienced is just different. I think competition among women can feel more personal, because there are fewer of us, and we feel less embarrassed to admit it when it gets us down. At the same time, I can imagine that there are plenty guys who get frustrated when they don’t progress at the rate that they feel that they should or feel a twinge of jealousy when that progression comes seemingly easily to someone else. Of course, most of what I observe in my day-to-day life is a neurotic woman (me) and a pretty chill man (Frank), so maybe it does skew my view of society as a whole.

The conversation reminded of me of a theory that I developed a couple of years ago, but I guess I never got around to posting about it. It must hold water, though, because Frank still regularly references it when explaining his relationship to competitive cycling, which is:  “My talent exceeds my [forks] given, so I’m pretty happy.”

I submit for your approval: Talent/Forks Given = Bike-Related Happiness

(I will be using the word “forks” from here on out, just in case my mom reads this, and because I’ve been watching too much of the “The Good Place”.) 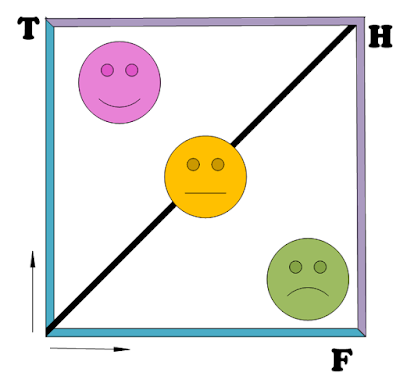 I first started developing this theory around the time that I joined Team Laser Cats, when I found myself surrounded by blissfully unaware baby racers who didn’t really seem to know what they were doing when it came to racing, but somehow they were already better at it than me. All my years, miles, and knowledge of racing and training couldn’t stand up to their natural-born engines and their uninhibited stoke, but they were such a great group of women that I was okay with it.

The idea also came from watching Frank, who has always been proportionally faster than me, despite training less. It’s not like he was ever missing his calling as Pro Tour rider simply due to his lack of saddle time, but the fact that he could occasionally get on the PACX singlespeed podium with Cat 1&2 dudes just by tagging along with whatever training I was doing (unless it involved the trainer or rollers, coz eww) indicates a certain amount of talent. If he got a coach and invested a couple of years of dedicated training that didn’t involve my slow ass, I’m sure he could become a podium-worthy regional elite masters ‘cross competitor. I’m also sure he would be considerably less happy if he were to do that.

Most of the time he manages to ride a beautiful line where he gets just enough success without trying super hard in the day-to-day. The other interesting thing is that, in the heat of competition, I think he tends to focus harder and suffer longer than I do, because he hasn’t wasted as much mental energy obsessing beforehand.

The theory of talent over forks given reaches the entire breadth of the cycling spectrum, from that annoying person who wins the first bike race they ever enter, to a very sad Sanne Cant in second place on the World Championship podium a couple of years ago. While both of these examples exceed me in the talent portion, I can actually much better identify with the latter. Sanne Cant has an incredible amount of talent, but she had stacked up a pile of forks so high for so long that nothing short of World Championship would allow her to break even. I remember reading once that she made her parents take her to the Netherlands (I think) to race when she was a kid, because she was too young to compete in Belgium. At least her 15ish years of forks finally paid off last winter.

When I look back at my life on the things I was naturally good at and the things I really cared about, those were never the same thing. I joked with Frank the other day that my academic career was like his cyclocross career, where I was very satisfied to complete a bachelor’s degree in marketing from state school with a 3.85 GPA with an incredibly low amount of effort. In retrospect, I sometimes wish that I’d set my sights higher or challenged myself more, but at the time, simply graduating college was a pretty big accomplishment where I was from. At the same time, I was given the rare opportunity to become a Division I athlete by joining my college cross country team, despite not having shown much real athletic promise or interest until that point in my life. So that was where I became ingrained with the mentality that being smart was easy and sports were hard, and the fact that they were hard made them so much more satisfying. Bikes were just the next step for me after my collegiate running career ended, because cycling offers a greater variety of legitimate competitive opportunities than running at the non-elite level. If master’s track meets were more prevalent, it might have been a different story.

When I decide that something will be my new thing, I go all-in, learn all about it, and invest as much time and money as I can. For me, the forks were always high, even before I made it to the starting line of my first mountain bike race. I put a lot of effort into knowing what to expect and looking like I knew what I was doing. (Old pictures will reveal that questionability of that statement, as I still looked pretty forking dorky, even for the Midwest in 2006.) However, you only learn so much from reading and imagining, and it turned out that mountain bike racing was scary and hard, and that often times, my competition took to it a lot more naturally than me, even if they were wearing yoga pants and running shoes. The thing was, that because mountain biking was scary and hard at first, I was only more determined to make it less so.

So how does one recover when their forks given greatly exceed their talent? Sometimes the answer really is as simple as needing to give fewer forks. However, as I planned to write this post I started asking questions about my theory. At its heart, it is still very true, but I think there is more nuance to be explored. What is talent, really? And what does the “happiness” in my equation really mean? Sure, the person who wins their first race ever is going to have a much more positive outlook on the sport for a while, but how happy are they really, compared to someone who took years to get that same win? I figure I have about five months before I’ll have another race report to write, so instead of boring you this winter discussing whether I made it onto the trainer the planned number of times each week, maybe I’ll start digging into these additional questions. Stay tuned…
Posted by Lindsay Hall-Stec at 3:37 PM